As things move forward in light of the resignations of both Sutton Turner and Mark Driscoll there may be a little-known but potentially important thing to know about the history of Mars Hill Church.  The thing to know is that there is in at least a handful of cases a documentable gap between the public dismissal of bloggers from the pulpit and (paradoxically) in social media on the one hand, and the private history of contact made by pastors at Mars Hill to bloggers on the other.

Over the years Driscoll has had more than just a few dismissive jokes to make about bloggers.  Mars Hill has also mentioned over and over how they don't try to respond to bloggers and social media.  Sure, they might make some copyright claims about stuff Warren Throckmorton has posted here and there and Justin Dean has apparently seen fit to respond to Warren Throckmorton about posts when contacted, apparently, but Mars Hill hasn't taken any initiative to unilaterally contact bloggers, has it?

Let's go back about seven years now, shall we?

Consider Scott Thomas' interaction with Joshua Ball about a blog documented over at these posts:

And in a December 23, 2007 email Scott Thomas opened unceremoniously with ...
http://joyfulexiles.files.wordpress.com/2014/06/mars-hill-e-mail-dialogue-scott-thomas-joshua-ball.pdf

I was informed of the progress of this situation by Pastor AJ. I have read your letter and your
blog.
Pastor Mark Driscoll has an official accountability team that examines charges as you alleged
against him. However, your tactics through a public blog (bypassing the biblical method and the
direct teachings of Jesus), prevent our taking them seriously. If you want justice and truth, you
must delete your blog immediately. So for all the public statements about not paying attention to bloggers from Driscoll over the years it looks like people like Scott Thomas and AJ Hamilton were definitely paying attention to bloggers and blogs, particularly if they had anything to say that seemed unsuitable for the cause of Mars Hill in general and about Mark Driscoll in particular.

But that was seven years ago, right?  Things have totally changed.  Mark has changed.  The church leadership has changed.  Sure, it has.  Seven years ago they were using emails to contact bloggers and last year they graduated to certified letter.  How would Wenatchee The Hatchet know that a Mars Hill pastor would go to the trouble of sending a certified letter to a blogger to broach the subject of blog posts?

Well ... some time in late 2013 Wenatchee The Hatchet was given something that came in the mail by a housemate.

There was a letter in it, too.  It's been redacted because Wenatchee The Hatchet prefers not to be too flamboyant and because the sender of the letter, though easily identifiable, doesn't need to get pointless spam or calls. 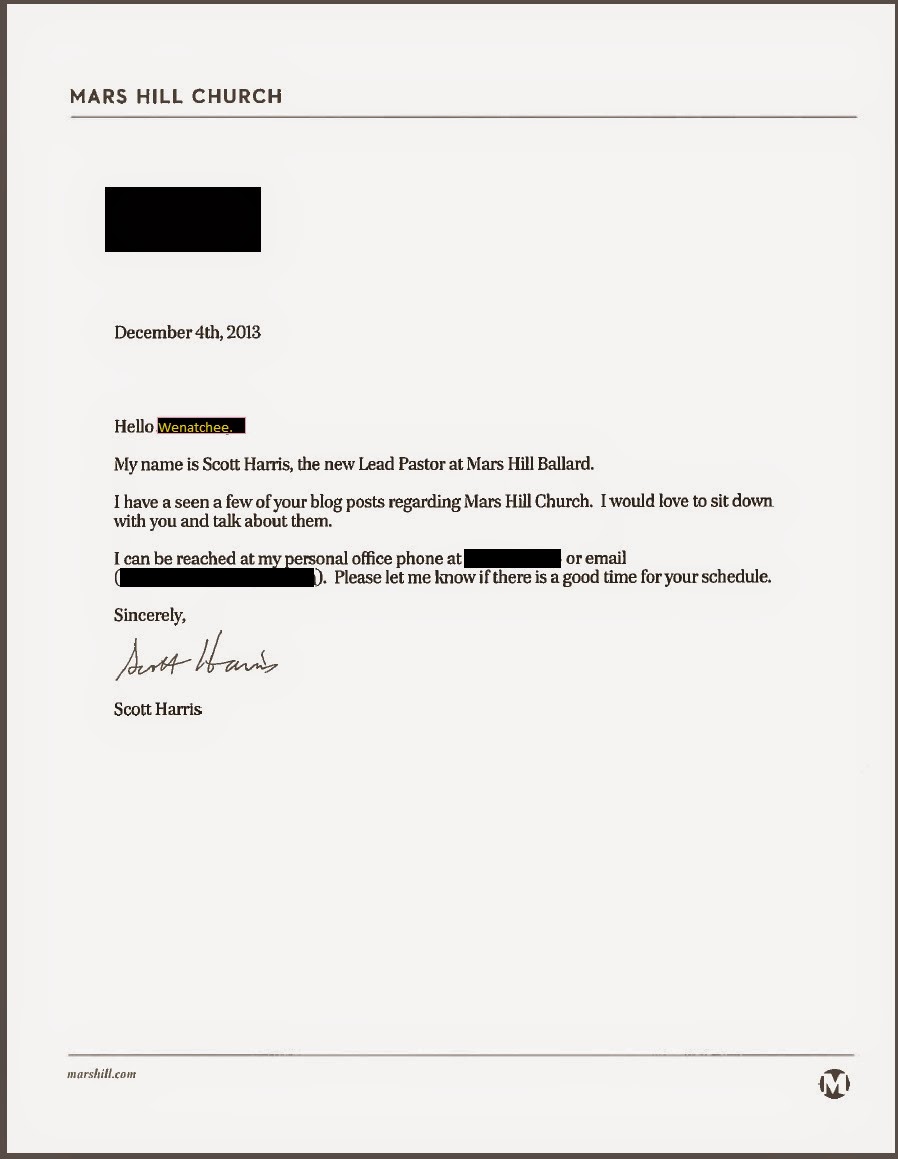 Precisely why Harris wanted to meet with Wenatchee The Hatchet to discuss a few of the blog posts was never explained.  Since Wenatchee The Hatchet 1) did not leave under church discipline 2) left on wonderful terms with his campus pastor 3) both the campus and the pastor had since stopped being part of MH 4) Wenatchee had spent a good deal of time simply documenting as accurately and in context as possible a history of Mars Hill and 5) there shouldn't have been any mystery within Mars Hill as to Wenatchee's history and association with Mars Hill (since even at that late stage there were a handful of pastors and staff Harris could have contacted who knew WtH's history within MH) it seemed pointless to go meet.

Wenatchee considered it for a time and in one conversation was asked, "Do you feel threatened or intimidated by this?"

"Well, no. If anything it might be the other way around."

As to what might have prompted an unbidden letter.  One can only speculate.  The dating of the letter was December 4, 2013.

Was there anything that given week, give or take a few days, that might have been of any note here at Wenatchee The Hatchet?  Probably not too much but there was this.
http://wenatcheethehatchet.blogspot.com/2013/12/from-july-2-2012-mark-driscoll-facebook.html
https://www.facebook.com/pastormark/posts/10150993500991912?comment_id=22792266&offset=0&total_comments=26

What other posts from that week?  This one about the Trial study guide.

Then there's this one showing that at one point On Mission, LLC had a more directly Driscollian line-up of members.  Driscoll was listed as "manager" twice and the headquarters was Mars Hill corporate headquarters as discussed in the following post:
http://wenatcheethehatchet.blogspot.com/2013/12/on-mission-llc-entity-that-owns.html

Of course all that changed later.  Moving along ... there was also this blog post.

"Another example of uncited material has been uncovered in a book written by Pastor Mark Driscoll. In this case, it occurred in the book he and his wife, Grace, wrote in 2012, called “Real Marriage” (Published by Thomas Nelson; 2012). This example first was noticed and cited by the blog Wenatchee the Hatchet on Sept. 30, 2013:"
That was around the time Janet Mefferd linked back to Wenatchee The Hatchet about Real Marriage and uncited material.  But while it is conceivable Harris could have drafted a letter about a couple of posts that were then recent it would be difficult to read too much into the terse letter of December 4, 2013.

So those were some of the recent posts that "could" have been in mind, theoretically, when Scott Harris wrote his letter.

It was sent certified letter, of course, but without any kind of return receipt.  This suggests the possibility to Wenatchee The Hatchet (with more than just a few years in non-profit fundraising and handling mailings) that it was more important to verify that the document was sent than that it was received.  Harris might have gone all this time wondering if Wenatchee The Hatchet got the letter.  Well, okay.  If there was any suspense about that at all (there shouldn't have been), Wenatchee got the letter.  It was a surprise and Wenatchee didn't see a compelling reason to reply and so didn't.

Whether he knew it or not Scott Harris writing Wenatchee The Hatchet was simply carrying on a custom behind-the-scenes amongst at least some in Mars Hill leadership of trying to get in touch with bloggers.  Thomas was blunt and direct and used email.  If you're a Mars Hill member and you opt to make Mars Hill your home you could, if you wish, ask Scott Harris or a suitable designated proxy what on earth he was contacting a blogger about.

No doubt other bloggers have been contacted by Mars Hill.  But the question to consider is how many bloggers were contacted unilaterally?  It's one thing of Mars Hill opts to respond to Matthew Paul Turner (has THAT happened?) or Warren Throckmorton (apparently has).  It's another thing if Mars Hill leadership takes the first step to contact a blogger if the public stance and history Mars Hill presents is that they don't care what some dumb old bloggers may have to say.

Let the record show that for whatever reason a Mars Hill pastor or two in its history have made a point of contacting bloggers.  As Wenatchee The Hatchet has labored to stick to on record, public, verifiable sources of information it just seemed that the better part of public service as a blogger with a bit of journalistic training was to just keep on working. The people of Mars Hill deserve to have the history of their community shared in a way that isn't constantly filtered through media reactions.  It isn't always pretty but the book of Judges isn't very pretty in depicting Israelite history.  If the history of Mars Hill ends up resembling the Book of Judges in some ways that's not really Wenatchee The Hatchet's fault.

Posted by Wenatchee the Hatchet at 11:50 PM