No comment at this time as I have errands to run and a friend to visit but here's something to read through. Blaming presidential candidate McCain for losing the deal to Northrup/Grumman with EADS as part of the project interests me but I'll have to get to this later. Following the nature of major military procurements and how competition works in practice is something that interests me. So many parts of aircraft get assembled here from stuff really built overseas that part of me thinks Boeing's take is kinda odd. It's not like we can't find out that deal-rigging has never happened in an industry with this much money at stake but it could get Boeing in trouble as much as they'd like McCain to get in trouble. Then, of course, I certainly don't know the details. But this could become an interesting story if there's any actual story to it, though I'm not sure I want it to be or that I'll follow it if there's more details.
Posted by Wenatchee the Hatchet at 1:07 PM No comments:

there's more than one kind of shark out named after a household pet ...

Don't know exactly where Michael Spencer of Internet Monk fame found this but it caught my eye, I mean, how couldn't it? 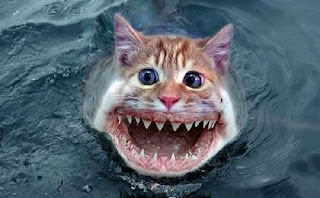 Posted by Wenatchee the Hatchet at 12:23 PM No comments:

The Pope to rehabilitate Martin Luther?

Pope Benedict XVI is to rehabilitate Martin Luther, arguing that he did not intend to split Christianity but only to purge the Church of corrupt practices.

Pope Benedict will issue his findings on Luther (1483-1546) in September after discussing him at his annual seminar of 40 fellow theologians — known as the Ratzinger Schülerkreis — at Castelgandolfo, the papal summer residence. According to Vatican insiders the Pope will argue that Luther, who was excommunicated and condemned for heresy, was not a heretic.
Cardinal Walter Kasper, the head of the pontifical Council for Promoting Christian Unity, said the move would help to promote ecumenical dialogue between Catholics and Protestants. It is also designed to counteract the impact of July's papal statement describing the Protestant and Orthodox faiths as defective and “not proper Churches”.

The move to re-evaluate Luther is part of a drive to soften Pope Benedict's image as an arch conservative hardliner as he approaches the third anniversary of his election next month. This week it emerged that the Vatican is planning to erect a statue of Galileo, who also faced a heresy trial, to mark the 400th anniversary next year of his discovery of the telescope.

The Pope has also reached out to the Muslim world to mend fences after his 2006 speech at Regensburg University in which he appeared to describe Islam as inherently violent and irrational. This week Muslim scholars and Vatican officials met at the pontifical Council for Inter-Religious Dialogue in Rome to begin laying the groundwork for a meeting between the Pope and leading Muslims, also expected to be held at Castelgandolfo.

Cardinal Kasper said: “We have much to learn from Luther, beginning with the importance he attached to the word of God.” It was time for a “more positive” view of Luther, whose reforms had aroused papal ire at the time but could now be seen as having “anticipated aspects of reform which the Church has adopted over time”.

The Castelgandolfo seminar will in part focus on the question of apostolic succession, through which the apostles passed on the authority they received from Jesus to the first bishops. After the Reformation Protestants took the view that “succession” referred only to God's Word and not to church hierarchies but some German scholars have suggested Luther himself did not intend this.

Luther challenged the authority of the papacy by holding that the Bible is the sole source of religious authority and made it accessible to ordinary people by translating it into the vernacular. He became convinced that the Church had lost sight of the “central truths of Christianity”, and was appalled on a visit to Rome in 1510 by the power, wealth and corruption of the papacy.

In 1517 he protested publicly against the sale of papal indulgences for the remission of sins in his “95 Theses”, nailing a copy to the door of a Wittenberg church. Some theologians argue that Luther did not intend to confront the papacy “in a doctrinaire way” but only to raise legitimate questions - a view Pope Benedict apparently shares.

Luther was excommunicated by Pope Leo X, who dismissed him initially as “a drunken German who will change his mind when sober”.

***
Wow, give any church enough time and they change their minds, like shifting from the 1 Enoch take on Gen 6 to the Augustinian position., for instance. Martin Luther getting rehabilitated by a pope is something I never thought I'd see, even if I have a hunch there's more than a little political gamesmanship in it.
Posted by Wenatchee the Hatchet at 10:04 PM No comments:

Figured out too late that if you're sending in a stunt person who claims to be healed that the actor has to be super excited about their healing and not nonchalant. :) Does this mean Benny Hinn is the real deal? Well, I personally doubt it since I was taken to one of the crusades years ago and the Benny Hinn placebo effect didn't kick in for me but that Hinn thinks he is a Christian doing the Lord's work I'm n0t all that inclined to doubt, which is what makes him creepier to me. But what all this DOES mean is that Hinn and his crew are shrewder than some would be investigative journalists give them credit for.
Posted by Wenatchee the Hatchet at 12:25 PM No comments: