a Holy Saturday tradition at Wenatchee The Hatchet--Blind Willie Johnson's "Dark was the Night ... "

https://www.youtube.com/watch?v=V8AuYmID4wc
Posted by Wenatchee the Hatchet at 8:30 AM No comments:

a new variation on a Holy Saturday custom at Wenatchee The Hatchet: Mahalia Jackson singing "Dark Was the Night and Cold the Ground"

In the annals of recorded music if there were anyone besides Blind Willie Johnson I love hearing sing "Dark Was the Night ... " it would, of course, be the magnificent Mahalia Jackson!

https://www.youtube.com/watch?v=cI1KsNPXwcs
Posted by Wenatchee the Hatchet at 8:00 AM No comments:

I've been a fan of Paul Hindemith's music for decades. I recognize that it's not exactly the biggest club of musical fans out there. Nevertheless, I really do like a good deal of Hindemith's music.  It also does not just so happen there's a movement from his symphonic suite Mathis der Maler that is perfect as a post for this day.

https://www.youtube.com/watch?v=qvHiTvfa27w
Posted by Wenatchee the Hatchet at 7:30 AM No comments:

Given the day ... and given that I love the music of Haydn ...
https://www.youtube.com/watch?v=tnNjsAGkgN0

Posted by Wenatchee the Hatchet at 10:42 PM No comments:

In case you'd never heard of the Swiss composer Frank Martin, well, here's an opportunity to hear the somber Swiss composer by way of his choral/orchestral work Golgotha.  I warned you, it's pretty somber and dour in a Swiss Reformed kind of way.  It is called Golgotha, after all.

https://www.youtube.com/watch?v=6_QyrzSCwv8
Posted by Wenatchee the Hatchet at 10:39 PM No comments:

an analysis Matiegka Op. 20, No. 21: a sonata in E major that is one of Matiegka's more "textbook" sonata forms, though the development draws heavily on transitional material

We're continuing our analysis of the sonatas of Matiegka and this time we're discussing Op. 20, No. 21.

Although this won't be the case for any of the Op. 31 sonatas it happens that I was able to get a PDF copy of Op. 20 back in the day when that was still available via IMSLP, so that document has been the basis for an analysis I'll be providing here.  For those who didn't get that while it was possible to get, I heartily endorse the Stanley Yates edition of Matiegka's complete solo guitar sonatas.  It really is well worth your time to grab and study if you want to get a sense of what guitarist composers were doing with sonata forms in the early 19th century.

So ... on to analyzing this particular piece.

Theme 1 kicks off the work, of course.

I differ with Stanley Yates' interpretation of this work in that I think the perfect authentic cadence in the middle of system 2 signals the end of the first theme.  What Yates seems to implicitly describe as a continuation phrase (which would be at 0:16 in the Tampalini recording) is what I regard as the start of the modulating transition. One of the things I've noticed about Matiegka's approach to sonata forms is that the grander the scale he's working in the more likely it is he has expansive transitions between what can be comparatively small themes, even if he works with compound or composite theme groups.  I regard Theme 1 as ending at the tenth measure.  In Grand Sonata II, 1, for instance, what could sound like a return of the opening phrase of the first theme turns out to be a feint that leads into the modulating transition. So based upon my reading through all of Matiegka's sonata forms I would say we should bear in mind that what in some other composer's work really would be a continuation phrase within a thematic group can often be the start of a transition.

In this case the arpeggios are a signal that Matiegka has introduced a new phrase, new figuration that lets us know that Theme 1 has wrapped up a few measures ago and that he's moving toward the new key region in which Theme 2 will appear.

Theme 2 starts at 0:44 in the key of B major, which is as textbook a theme 2 as we can get for a sonata form.  This is a three-part compound theme. The first part, which I'll indicate in a visual analysis of the score, is the kind of early 19th century guitar theme that, were this composed a century later, would have many melodic and rhythmic elements that would be easy to transform into a ragtime strain.  There's a simple tonic to dominant initial phrase and the second phrase brings back tonic chord melodic activity that shifts to a secondary dominant to dominant half cadence.  That, for instance, makes this seem like a kind of proto-ragtime gesture.

At 0:57 we get another gesture, a kind of jump-bass octave shifting run that leads into the second part of Theme 2 (starting 0:58), which has two sections.  This is a fairly standard closing theme idea in the bass strings with figuration in the treble strings.  It's repeated at 1:13 with sixteenth note elaborative arpeggiation.  This part is important structurally as it is the closing material for the exposition that leads into the coda, but also because, as we'll hear (and see), this secondary material within the second thematic group is going to become the basis for much of the development section.

When I've looked through a lot of early 19th century guitar sonatas I've noticed that they rarely have just two themes. They often have thematic groups, such as a first group that has a compound theme or a rounded binary form; they more often, however, have three themes.  The themes might often seem interchangeable and somebody like Theodore Adorno would say interchangeability of thematic materials is characteristic not only of popular music but lesser level art music.  But, technically, it would be accurate to say many early 19th century guitar sonatas have three-theme expositions.  One of the clearest examples of a three-themed exposition would be Diabelli's Op. 29, No. 3 Sonata in F major (which I think is the best of the three from his set).  Theme 3 starts at 1:33 in Tampalini's recording and in the score it starts on the last measure of the penultimate system on page 1.  The final cadence for the exposition is at the top of page 2 and takes place at 1:46.

In the case of this particular sonata form, Matiegka draws from his transition and from the secondary material in his second theme.  Or, depending on how you want to parse the exposition, he might have one theme in the key of E major and up to three themes in the key of B major, in which case he draws from "Theme 3" or "Theme 2B".  That's what I've indicated in my visual analysis of the score that you'll be able to consult at the end of this essay.  The material in the development derived from Theme 2B appears at 2:02 in the Tampalini recording and in the second half of system 2 on page 2 of the score. (see below)

At 2:16 the development lands on a dominant pedal point that will be substantially extended and embellished, basically until the recapitulation.  This material, as I hear and read it, is fairly clearly derived from the closing passage work from the modulating transition of the exposition.  This dominant pedal point work intimates a modal mutation into parallel minor may be taking place.  It won't right away, but we're getting ahead of things.

The recapitulation starts at measure 3 of system 6 on page 2 (2:40).  In the recapitulation Matiegka splices transitional materials in between phrases from Theme 1.  It's common for composers to substantially recompose, shuffle, extend or omit materials in a recapitulation and that's what we see and hear going on here.  At 2:55 Matiegka reprises his Theme 1 material in E minor and he continues to develop his Theme 1 and transition ideas in minor while working toward a strong half cadence transition up through to 3:14.  Theme 2 appears at 3:16 and from here on to the end of the sonata form it's fairly "textbook".  At about 4:30 with no expositional repeat this is probably the most workmanlike of Matiegka's sonata forms and probably the most "textbook", to the extent that we could even say Matiegka wrote "textbook" sonata forms.  It's fun but it's not his most inspired or engaging work.  Still, it presents enough points of interest for guitarists interested in studying sonata forms for the guitar that it's been worth writing about.

As Stanley Yates has pointed out, this sonata movement was listed as one of four large-scale sonatas Matiegka's Grand Sonatas I and II listed in incipit form on the cover pages, the fourth being a work in F major that seems to have been lost. 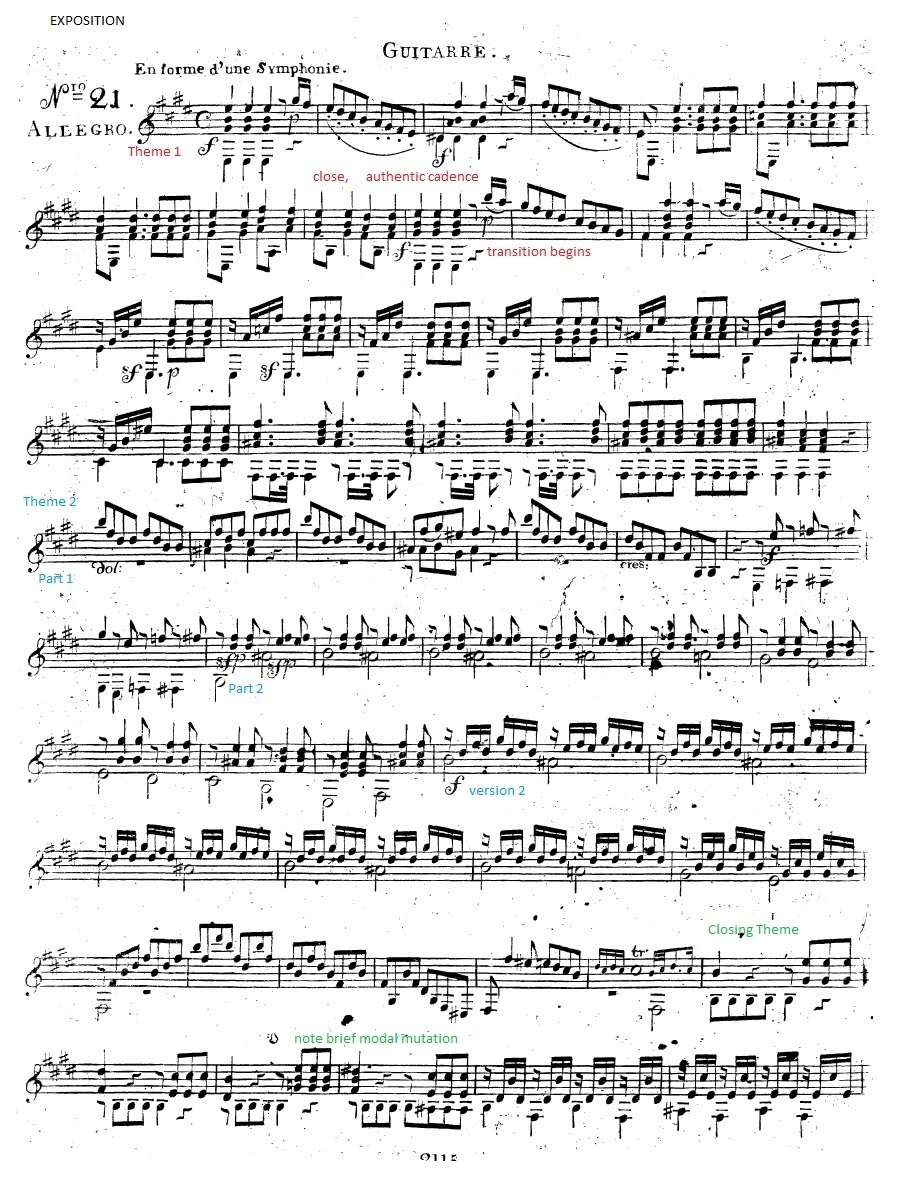 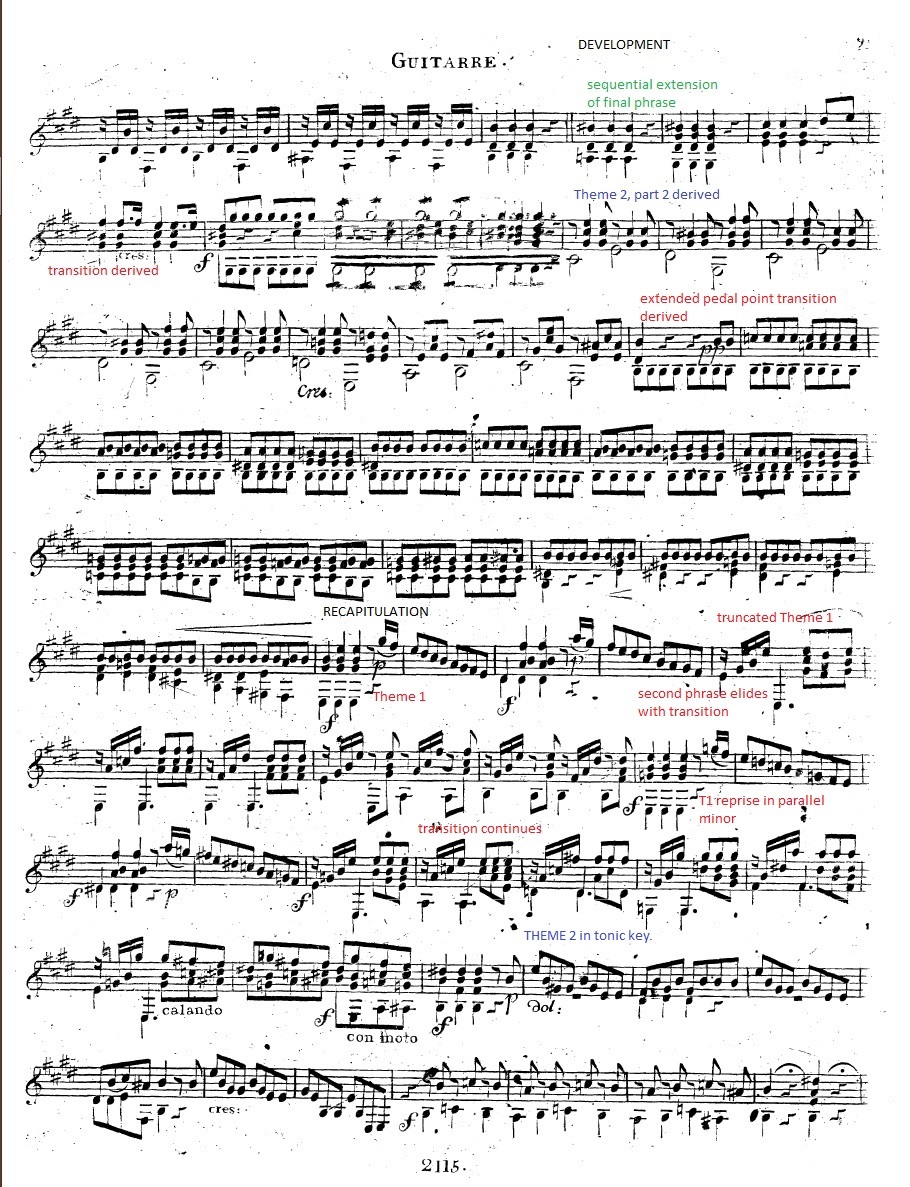 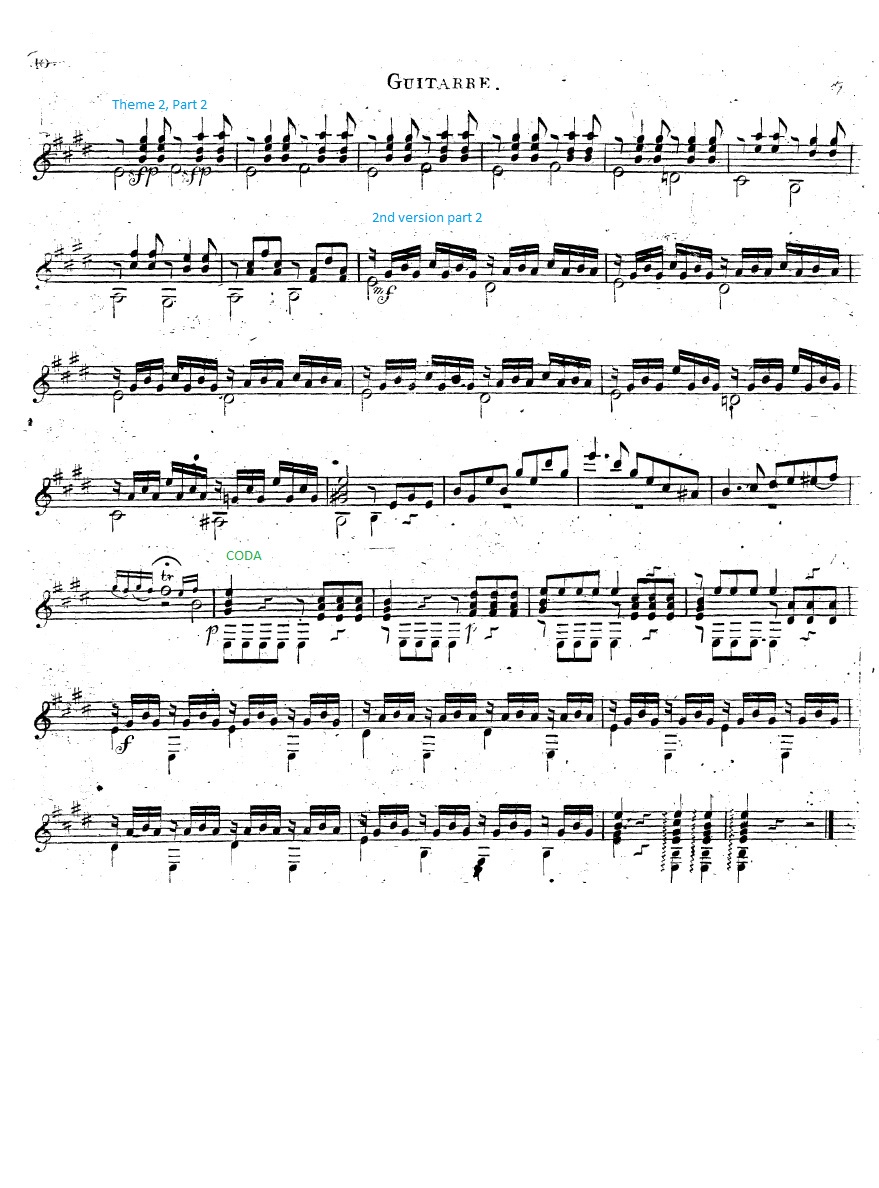 Posted by Wenatchee the Hatchet at 8:41 PM No comments: