A Crawford Gribben-inspired proposal, seeing the history of Mars Hill Church as a variation on American Redoubt minus theonomy; on Mark Driscoll being at WSU during the initial rise of Doug Wilson's Moscow cultural project

In order to set up my proposal I need to present to you a few key quotes from Mark Driscoll across the course of his career as a public figure doing ministry.
Read more »
Posted by Wenatchee the Hatchet at 9:14 PM 2 comments:

supplemental reading for those who heard Episode 5 of The Rise and Fall of Mars Hill, a survey of materials formerly and currently available from Driscoll germane to the topic of what married women were told (or expected) to do

I have been thinking about episode 5 from The Rise and Fall of Mars Hill.  It was pretty well-done but I confess to ambivalence. I am glad that the Scotland sermon was quoted so extensively, although the audio sounded a little sped-up to make sure there was room for the whole clip in the podcast.  Nevertheless, I agree with exactly how much of the excerpt they quoted.  Longtime readers will not be surprised I think so because I transcribed the entire anecdote myself here at Wenatchee The Hatchet.

I have, it turns out, written considerably more on these topics as a single guy than I would have guessed I would have but sex, sexuality, gender, and gender roles were so inextricably part of Mark Driscoll’s shtick it is impossible to not run into them.

While I have thoughts on episode 5 it's going to take time to organize them and settle them.  I do, however, want to call attention to something Driscoll tweeted about the  marriage self-help book he and Grace were putting together and a joke he rolled out.  Driscoll found it funny and witty to suggest in lieu of a finalized title that the working title was "Your Best Wife Now". 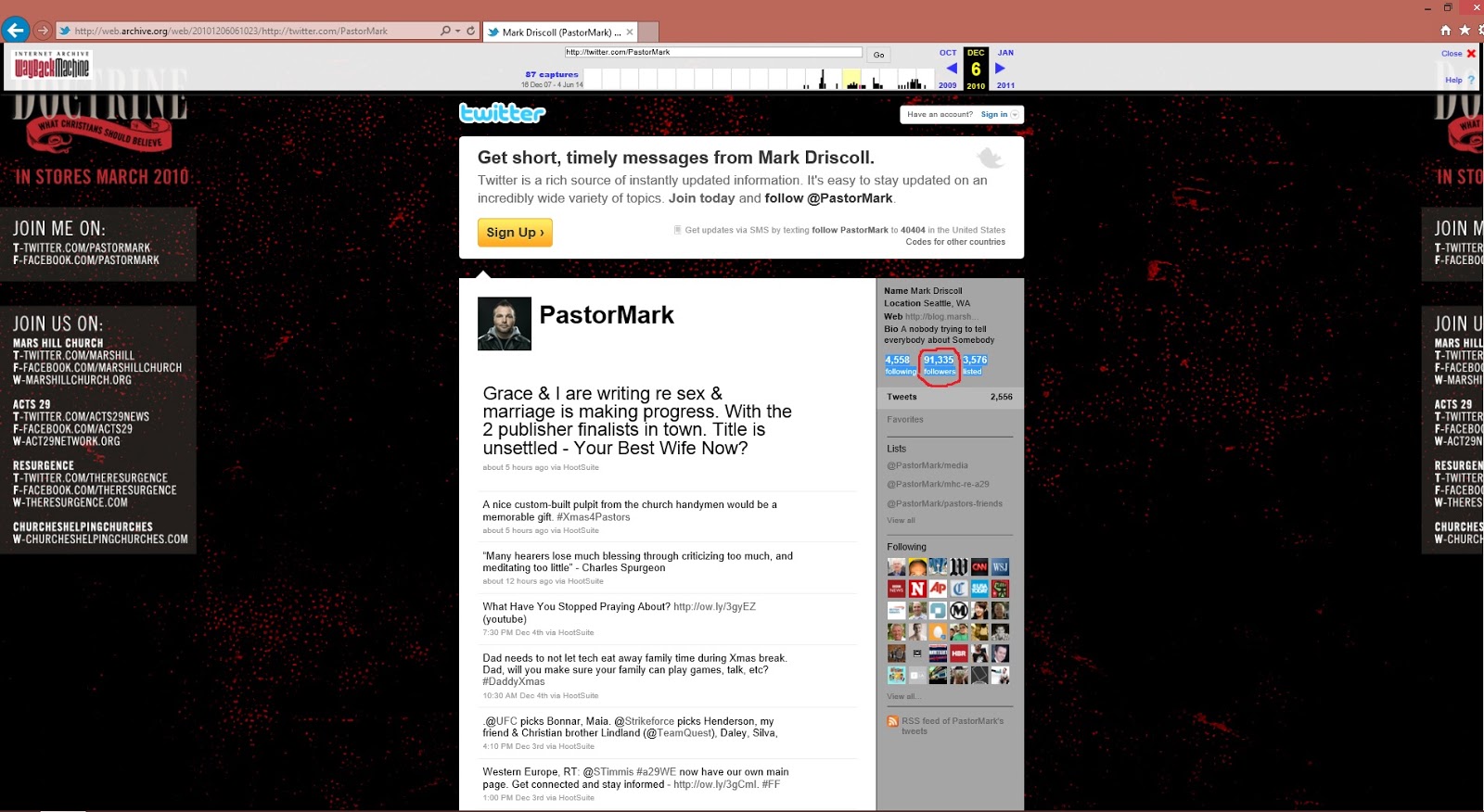 Posted by Wenatchee the Hatchet at 7:21 AM No comments:

Episode 5 of The Rise and Fall of Mars Hill - What We Do To Women has dropped. Julia Duin asks why CT has taken up this project and some observations on how Mark Driscoll's ideas of chivalrous defense of the honor and purity of his wife were linked to boasting of threatening strangers with assault and blocking people from contacting her

https://www.christianitytoday.com/news/2021/july/mars-hill-elders-letter-mark-driscoll-pastor-resign-trinity.html
https://julieroys.com/mark-driscoll-unfit-former-mars-hill-elders/
https://www.getreligion.org/getreligion/2021/7/26/covering-mark-driscoll-and-life-after-mars-hill-why-isnt-this-a-mainstream-news-story
https://www.christianitytoday.com/ct/podcasts/rise-and-fall-of-mars-hill/mars-hill-mark-driscoll-podcast-things-we-do-women.html
Something I hope Cosper can get to in the podcast series is the history of Mars Hill attempts to start a Bible college, a publishing company, and a music label.  Since Tim Smith has already been going on record discussing the failed attempts at starting a music label is an element of Mars Hill history I've tried to chronicle but which is ideally a topic to be taken up by people closer to the scene (I'd left around 2008-2009).  Why that matters is because Driscoll claimed he never imagined Mars Hill would get so big in 2014 yet almost anyone from the earlier years could cite that starting a music label was always part of his vision.  The "Gosh, I just never imagined it would get this big" is basically a lie anytime Driscoll has said it.  Repeated references to how behind the scenes Mark wanted people to marry and pump out babies so that within a generation or two "we" would have taken over the city of Seattle belies the "we never thought it would go this big".  Driscoll's joke about having started a fertility cult wasn't funny to me circa 2005 and it's still not funny to me.
Which roundaboutly gets me to the latest episode, which I may have to write about more after I have time to collect my thoughts and consult my resources.  I do have some initial thoughts ...
Read more »
Posted by Wenatchee the Hatchet at 7:41 AM No comments:

Email ThisBlogThis!Share to TwitterShare to FacebookShare to Pinterest
Labels: Mark Driscoll, The rise and fall of mars hill, The Trinity Church

Christianity Today reports 39 (41 as of 7-28) former Mars Hill pastors state Mark Driscoll unfit for ministry, and within minutes Driscoll tweets a link to a story about how this one total stranger pastor podcast fan of his had a vision and that confirmed that moving to Arizona was the will of God

Their statement also includes a never-before-released document from October 2014 that details how the church investigation, conducted by members of the elder board at the direction of Mars Hill’s board of overseers, found Driscoll to be quick-tempered, arrogant, and domineering.
https://www.christianitytoday.com/assets/22730.pdf

Based on my own reading and study of Mars Hill Church history the statement was actually released, or rather leaked, some time ago.
https://www.wthrockmorton.com/2020/02/20/from-the-past-the-mars-hill-church-board-of-elders-wanted-mark-driscoll-out-of-ministry/
Read more »
Posted by Wenatchee the Hatchet at 6:52 PM 2 comments:

some thoughts on The Rise and Fall of Mars Hill episode 4, masculinity and markulinity; a church in a death spiral before the press noticed the spiral; the Christian celebrity and redeemed vices; and American gospels that have no eunuchs

Cosper did not quote the rants of William Wallace II and that is understandable, given the podcast is produced by Christianity Today.  It is unfortunate, however, in that for some of us who were attending Mars Hill at the time there were discussions about who this William Wallace II person was and what it said about him that he ranted as he did online.  I remember two people who told me "If you knew who it was he was writing as William Wallace II you'd understand more what he's trying to do."  There was a sense that this was a hyperbolic character trying to make a point.  My response at the time was roughly like this, "It doesn't matter who it is in real life, they're an asshole and they're acting like an asshole. Whatever point they're trying to make isn't justified by how they react to people."  When I heard it was Driscoll I was not especially surprised.  My mistake was convincing myself that Mike Gunn and Lief Moi would rein in Driscoll's lesser tendencies, not stopping to think about how they let William Wallace II happen without any apparent objection to begin with.
Read more »
Posted by Wenatchee the Hatchet at 7:20 PM 2 comments: