All of that is to say that you can play quite a variety of three factor chords using natural harmonics alone once you go to the effort to learn where all the natural harmonics are and account for the fact that there are inevitably microtonal differences between the F sharp harmonics you can get across the strings.

So if you're a guitarist or a composer who has ever wondered whether chords in natural harmonics are even practical, yes, they are.  In fact a lot of them are fairly easy.

If you don't believe that then give these a try on your guitar.  You should find most of them fairly easy in principle but I suppose I should provide a caveat.  There's nothing like mastering chords played entirely in natural harmonics to show you how clean your left hand technique really is.

This is not even close to being a comprehensive chart since it doesn't account for harmonics you can get between the fifth and sixth frets.

The chart has two staves. The upper stave shows how the harmonics look when written at pitch. The lower staff shows how you would play the harmonics chords in terms of both the left and right hand placement needed to execute the chord.  Some of these will require a more flexible approach to left and right hand positioning than some guitarists may be used to but all of these chords, once you refine the basic technique of executing natural harmonics as a starting point, are pretty easy to play.

So if someone like, say, Sofia Gubaidulina, wanted to know what kinds of chordal sonorities are possible on the guitar using only natural harmonics she's got an answer ... if someone were to send something like this her way.  I'd welcome whatever sort of work she'd write for classical guitar that makes use of all natural harmonics chords, personally, but that's just my own personal opinion.

Just to be clear, even though I published this chart here I'm telling you that I think of this particular chord chart as something that is for anyone to use (i.e. public domain).  If you found this here at Wenatchee The Hatchet please do mention it when relevant, but also feel free to use it as a reference for your own guitar composing. 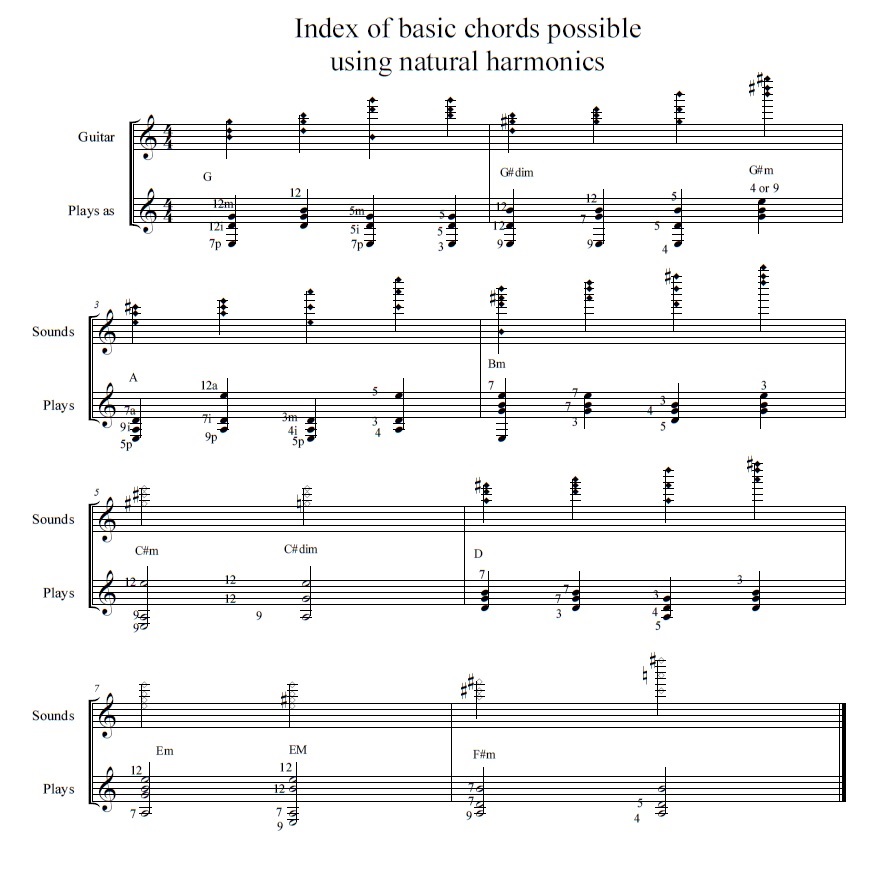 Posted by Wenatchee the Hatchet at 9:04 PM No comments:

George Sandow blogs about how American orchestras don't divulge ticket sales, how sales have been dropping, and this reminds me why I mainly write for the guitar

From time to time I have been asked, when I've presented my music in different settings, but more often this has been asked when I play at a composer salon, if I have considered writing for more instruments than just the guitar.  At one level, I have, often.  I've been slowly working on a set of chamber sonatas pairing up the guitar with woodwinds, strings and brass in duo sonatas since the start of the century.

But what I have never seriously considered was writing anything symphonic and not because I don't enjoy symphonic music.  Over the last twenty some years I have begun to get the impression that the day of the symphony as the apex of prestigious musical art has come and gone some time in the last century.  As a guitarist I find enough interesting and enjoyable challenges working with just my instrument that even though I love to write chamber music going the next bigger step into something symphonic just doesn't appeal to me.

George Sandow's recent blogging has reminded me that even if I ever had such a fancy as to write music for orchestra it's not clear that it would ever get a premiere or that it would necessarily make any money.

I’ll repeat very strongly what I said at the start of the previous paragraph. Orchestras do not want to reveal their ticket sales. (Which, if the data were available, should be clearly divided into subscription sales and single ticket sales, and into sales to core classical concerts and sales to other events. We should be given both the number of tickets sold in each category, and the revenue from those sales.)
Once at a break at a conference I was at, an orchestra CEO told me outright that the data couldn’t be revealed. I’ll be discreet and not mention this person’s name, but anyone who knows the recent history of American orchestras would  recognize it. This person said to me (in words as simple anbd direct as this): “The public must never be told how badly we’re doing.”
The fear is that if the truth were known — and ticket sales figures would reveal it —donors would be scared away.
Not the best thing to do
Which seems to be a very bad road to go down. Do orchestras really want in effect to lie to their donors, to keep the money flowing in? Surely that’s going to backfire.
...
So back to orchestras not — to put it mildly — being transparent about their ticket sales. To me, this is greatly unfortunate. Among much else, it deprives the entire classical music field of data we badly need. We know classical music is in crisis, and has been for quite a while. (I’ve been teaching a course on the crisis at Juilliard ever since 1997. That’s one quick way to measure how long the crisis has gone on, though of course signs of it can be found earlier.)
So our field is in crisis. One part of the crisis is a decline in ticket sales. But how bad has the decline been? By far the largest amount of data on that is orchestra ticket sales. But we’re not allowed to know those. So the whole field is deprived of data that would show how bad the crisis is. Or, for that matter, if ticket sales improved, data that might show how the crisis might be easing.
Orchestras also hurt themselves, I think, by not telling the world how many tickets they’re selling. Because if they admitted they were having a problem, wouldn’t that give them the strongest incentive to fix it? Once you tell the world you’re in trouble, you have to say how you’re going to improve. Which I think would help orchestras greatly, no matter how much of a shock it might be at first.
Some years ago I was shown some of this secret data, and it truly looked alarming. Ticket sales for orchestras’ core classical concerts were headed strongly downward, over nearly 15 years.
I don’t know what the picture looks like now. But all of this would have to be in the book. All the data that orchestras don’t want us to have.
...
What is colloquially known as classical music probably has a future but that doesn't mean that future is necessarily going to look like a symphonic future.  As someone whose musical education and life in concert music traditions has been split between choral music and guitar music I've managed to have a pretty happy musical life having hardly any involvement in symphonic stuff, which isn't to say I didn't have a blast performing Durufle's Requiem or Bernstein's Chittchester Psalms.  Those were great experiences for me but they were outliers.  Durufle's Requiem is one of those works that singers can really love and people with more instrumental backgrounds can find exasperating.  I know a flutist who hated the Durufle but her brother-in-law, a cellist, loved it ... of course that the orchestral version of the Requiem has some pretty killer tunes for the cello probably had something to do with that ...
Still in something of an incubation phase but ... well ... I really like to write even if I'm not necessarily getting my projects done as fast as I'd like.

Posted by Wenatchee the Hatchet at 6:28 PM No comments: