Warren Throckmorton on the elderless church of Mark Driscoll in AZ parts 2 and 3 (also 4), revisiting how neither a board of directors nor a board of advisors & accountability seemed to have restrained consolidation of powers in the Mars Hill years

Warren Throckmorton now has a multi-part series on how Mark Driscoll's newest church, The Trinity Church, has no elders and a board that seems to simply exist.
https://www.wthrockmorton.com/2021/04/26/mark-driscolls-elderless-church/
https://www.wthrockmorton.com/2021/04/28/mark-driscolls-elderless-church-part-two/
That there is a board of directors that includes men who don't attend the church may remind long-time readers who know the history of Mars Hill of the Board of Advisors and Accountability that had a Board of Overseers.
Throckmorton has noted that Mark Driscoll Ministries is doing business as Real Faith.
https://www.guidestar.org/profile/47-2485096
https://pdf.guidestar.org/PDF_Images/2020/472/485/2020-472485096-17362425-9.pdf
The board members on Mark Driscoll Ministries are
(1) MARK DRISCOLL, PRESIDENT
(2) RANDAL TAYLOR, SECRETARY (TREASURER)
(3) BRANDON THOMAS, BOARD MEMBER
(4) JOSH MCPHERSON, BOARD MEMBER
For the last of these names that's a name that has, in fact, shown up a handful of times here at this blog.
Throckmorton linked to some audio that Driscoll preached at McPherson's church that went away after a while but a transcript is at the following link:
https://wenatcheethehatchet.blogspot.com/2018/09/mark-driscoll-posts-excerpt-of-his.html
There was also a listing for Josh McPherson as a Mars Hill pastor for a while, back around September 2014.
https://wenatcheethehatchet.blogspot.com/2014/09/so-is-there-mars-hill-wenatchee-in.html
Now for Throckmorton's part three "Where's the Board?"
https://www.wthrockmorton.com/2021/04/30/mark-driscolls-elderless-church-part-three-wheres-the-board/
Throckmorton has published a flow chart that lists Ashley Chase as "Director" in connection to Real Faith.  If Real Faith is Mark Driscoll Ministries and Ashley Chase was listed as director of Real Faith in the flow chart then ... 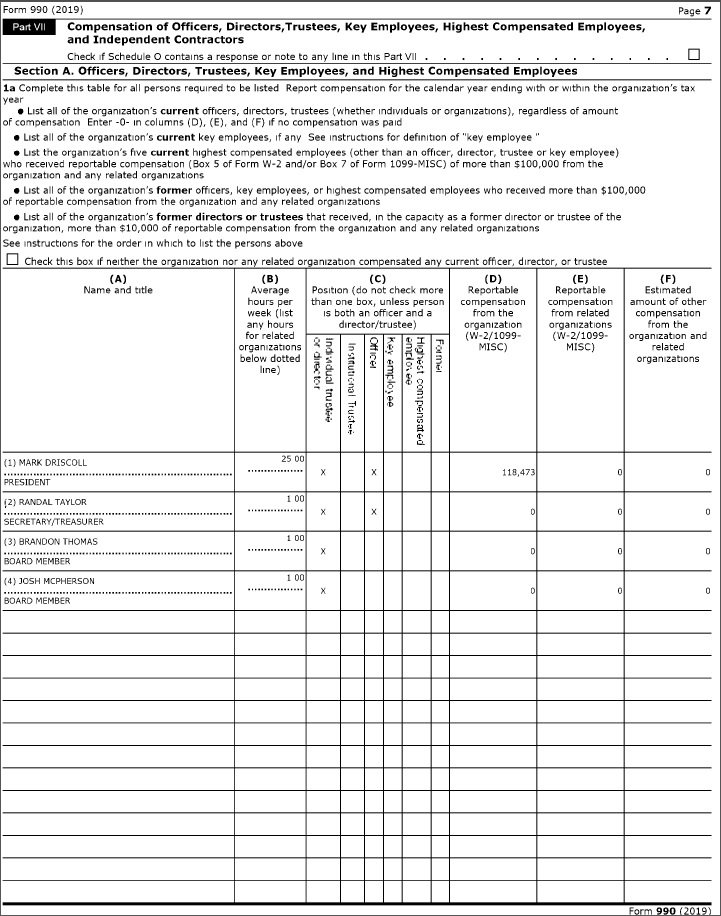 What kind of director isn't listed on the 990?  You can open up the 990 as a PDF and search "Ashley" and Ashley Chase will never come up.
https://thetrinitychurch.com/ministry-staff/

Ashley is the Driscolls’ oldest of five children. She studied theology at Capernwray Bible School in Costa Rica, is a graduate with honors from the Master’s program at Arizona State University’s Barrett Honors College, recently married to Landon, and is a gifted Bible teacher, speaking and writing fluently in English and Spanish. She is involved with missions at The Trinity Church, is the Executive Director at Real Faith, and was a campus leader for a prayer tent that has prayed day and night for over 10 years at Arizona State University, the largest university in America. She recently co-authored Pray Like Jesus with her dad to encourage people to learn to pray to God as Father.

ZoomInfo may be fuzzy by comparison but Chase is listed as missions director at The Trinity Church.
https://www.zoominfo.com/p/Ashley-Chase/3628170318
https://www.zoominfo.com/c/the-trinity-church/373095805
Perhaps the information can be updated in a later 990.
As far as a board that formally provides oversight but in practice doesn't provide oversight in connection to Mars Hill, some extensive on the record statements by Sutton Turner and Dave Bruskas last year let it be known that the Board of Overseers on the Mars Hill Board of Advisors and Accountability did not want Mark Driscoll found unfit for ministry by the Board of Elders assigned to investigate charges made against Driscoll; and that in the midst of a deadlock between the two boards Mark Driscoll resigned. That material is discussed at some length in the following series here at Wenatchee The Hatchet.
https://wenatcheethehatchet.blogspot.com/search/label/2020%20interviews%20on%20the%20late%20Mars%20Hill
In other words, if a board did nothing to prevent Driscoll from resigning rather than cooperate with a restoration plan they came up with for him at Mars Hill Church there is no clear reason that a board of directors at The Trinity Church would necessarily keep him accountable now.  There are two basic options for a board in relationship to Mark Driscoll, either the board has him on a very tight and close leash or the board is a formality that allows him to focus on ministry and media projects that doesn't meaningfully challenge him and gives him a rubber stamp.  Given the coverage of boards at Christian organizations in the last few years it would be hard to shake a sense that a board may fall more in the second category.
Now I disagree with Warren Throckmorton that there are some meaningless phrases in the documents he's discussed.  "throne down not pew up" has some history, at least when Mark Driscoll talked with Larry Osborne about what the concept of church governance being from the throne down not the pew up meant.
https://wenatcheethehatchet.blogspot.com/2019/06/uscal-bridge-summit-2019-interview-with.html
Having Robert Morris and Jimmy Evans on the board of The Trinity Church is having a man who advised Driscoll step aside and heal up from Mars Hill in the first case and in the second case a man who prophesied that Mark Driscoll would have a bigger ministry than before.
So if you've followed the work I've done on compiling and examining the on-record statements of Sutton Turner and Dave Bruskas about Mars Hill from last year about board conflicts then you will understand why I have some doubts about how much any new board of directors will rein in Mark Driscoll.  If the Board of Advisors and Accountability let Result Source happen without, apparently, a single discussion of whether the idea was a good one or not, that does not bode well for a new board of any kind holding Driscoll accountable for anything that might come up.
So it's not clear to me, having documented the history of Mars Hill off and on over the last decade, that the new board(s) are going to keep Mark Driscoll any more accountable in his new ministry context than they did in the last ministry context.
UPDATE 5-2-2021 6:38pm
There is also a Part Four
https://www.wthrockmorton.com/2021/05/02/mark-driscolls-elderless-church-part-four-who-are-the-elders/
One of the things that seems clear from the axioms of The Trinity Church from a document provided to Throckmorton by a former participant of said church, is that the engage-enrage paradigm indicates there will not be any public response or reaction any time soon, if at all.
References to an incident are not going to be grist for conversation here, by the way.  Even if Chase has opted for a public role and has co-authored a book with her dad I'm not in a hurry, let's put it that way, to discuss the kids much however it may often seem that the post-Mars Hill Church Mark Driscoll may be tempted to buffer some of his more tendentious ideas and assertions (on spiritual warfare, for instance) by way of stories about his wife or kids.  The way church discipline was handled regarding the scenario with Andrew Lamb and Kaitlyn Noriega circa 2011 to 2012 should not have given anyone ideas that a church founded by Mark Driscoll was going to be different in Arizona than Washington.
https://wenatcheethehatchet.blogspot.com/search/label/a%20confluence%20of%20situations
What likely "is" different is some folks in the Driscoll family are more circumspect about what goes on social media and whether or not to use it at all in some contexts. The series "A Confluence of Situations" gets into substantial detail about how the social media culture of the later Mars Hill Church meant that I, for instance, was piece together the identities of the parties involved in the Andrew Lamb disciplinary situation through a mixture of Mark Driscoll sermons, Seattle P-I coverage, and the social media (Twitter and blogging) of other related parties.  It is not likely the Driscolls will want to replicate the social media usage patterns of the Noriegas that made it so easy to document at length how a private affair became a church discipline case that ended up being a national headline or two.
As for me, I am inclined to not discuss the Driscoll kids beyond statements Driscoll made on record.
https://wenatcheethehatchet.blogspot.com/search/label/Esther%20and%20Driscoll%27s%20interpretive%20mojo
Driscoll wrapping his most contentious and dubious assertions about interpreting the Book of Esther in stories about his daughter Ashley is not something a pastor with a Masters in Exegetical Theology should be doing when he could simply exegete the text ... assuming he knows the biblical languages.
Posted by Wenatchee the Hatchet at 6:52 PM