Mars Hill in the last fiscal year, the year of purging content

Something else that is worth noting about Mars Hill in the last fiscal year has been the sheer scale of its purge of older media, whether sermons or teaching.

Everything Mark Driscoll preached prior to the 2008 Doctrine series has been wiped off the public face of Mars Hill on the internet, so to speak.

But there have been some notable post-2008 disappearances.  The Trial series (8 witnesses from 1 & 2 Peter) has been wiped out.  That series featured a Mark Driscoll sermon in 2009 where he said he didn't have a side company to manage book royalties because he was worried about selfish gain.  It was also the series in which he screamed "How dare you!?" for those who remember that.  Well, it's gone.

But another series from 2008 on to the present also vanished, Peasant Princess.
A sampler from the Peasant Princess in which Mark Driscoll explained how protecting wives was a huge part of his heart for men and a big part of his relationship with his wife.

but since that stuff doesn't work try this link below
It would start about 33:40

http://www.youtube.com/watch?v=l2qJ614dkxw
... and this is an ENORMOUS part of my relationship with Grace.  I mean I still remember when I first started seeing her she, uh, she went off to college, I was still in high school and they ran out of housing so they put her in a guys' dorm. And I was like, "What!?" so I got in the car and I drove to the university and I knocked on all the doors of all the guys on her floor. "Hi. My name is Mark. I love this woman. Anyone talks to her, touches her,  thinks about talking about touching her I will beat them. Literally I threatened twenty guys. Just knocked on every door. No way she's gonna get messed with. No way.

Later on when she transferred to another university, WSU, she's five hours away. And she moved out there and her phone wasn't hooked up yet and we didn't have cell phones. And I told her, "When you get there, go to a pay phone. Call me. Let me know you got there safe."  Well she ... didn't call so I got in the car and I drove there. Five hours.  The day I had to work. And I knocked on the door. She answered it and I said, "Whu, you didn't call." She said, "I forgot." I said, "Are you okay?" She said, "I'm okay." So, okay, good, I got in the car and I drove home. Just checking. Six hundred miles.  Who cares? It's Grace.

And if that doesn't work (or didn't work) try finding the audio courtesy of ...
http://sydneyanglicans.net/media/audio/sweet_to_my_taste_part_2

And it seems Mars Hill opted to delete the Peasant Princess series earlier this year.

And the Spiritual Warfare series from early 2008 vanished about a week or so after Wenatchee The Hatchet started to actually extensively quote from and link to the material.

For instance, there was a comparison and contrast of Mark Driscoll on lobbying for more sex from his wife while Bill Clem was learning to do without as his wife was dying of cancer
http://wenatcheethehatchet.blogspot.com/2014/01/mark-driscoll-on-bill-clem-leaving-in.html

Or Mark Driscoll on bitterness as a demonic foothold regardless of the legitimacy of the complaint in 2008 as a context for Driscoll's 2012 statement that he was bitter toward Grace over the lack of sex in the marriage
http://wenatcheethehatchet.blogspot.com/2014/03/mark-driscoll-on-bitterness-as-context.html

Or how the first category of "ordinary demonic" was not-enough-sex-in-marriage and that withholding sex was satanic
http://wenatcheethehatchet.blogspot.com/2014/03/mark-driscoll-on-ordinary-demonic-not.html

Of course Mars Hill has taken to purging bits and pieces from sermons since as far back as 2012.  When Wendy Alsup quoted from Mark Driscoll's "The Man" and specifically cited the "woodchipper" anecdote that anecdote was unceremoniously and awkwardly sliced from the sermon. So Mars Hill already has a history of scrubbing away things Mark Driscoll has said in the past.  It's not a big surprise that in 2014 Mars Hill has purged older Driscoll content on a truly epic scale.  Think of it this way, if Driscoll has been doing ministry for at least 18 years then no more than maybe a third of his preaching and teaching might still be available.  Wenatchee The Hatchet has made a point of quoting Mark Driscoll as accurately and in context as possible and yet for some reason material has been purged pretty quickly.  It's not as though Driscoll sermons and teaching haven't been available to the public for the previous eight years.

But then again, in 2013 Mark Driscoll's publishers, as Warren Throckmorton has been documenting over the last six months, have been quietly and discreetly fixing all the citation errors in Driscoll's books when they have been found.  The unfortunate thing is whether or not Driscoll defenders cite every last citation error as a "mistake" the larger question of why not a single one of Mark Driscoll's editors flagged down the citation errors has largely gone unaddressed.  Even if we assume for the sake of discussion that maybe Driscoll made mistakes that looked kind of like plagiarizing the works of others in at least seven of his books ... aren't editors and fact-checkers supposed to be able to spot stuff like that?  If Driscoll is in some sense exonerated by a defense that he made mistakes there's still two problems.  The first problem is that he's claimed to have a pretty good working long-term memory.
From a February 27, 200 Q&A at the Resurgence National Conference
http://www.acts29network.org/sermon/qa-with-mark-driscoll/
about 16:30ish into the audio

... I'm not necessarily the guy who sits down and reads a book because every book has things in it that I don't need at that time.  But I'll read a chapter of this book, half of this book, page of this book ... hundreds of pages a week. ...I read very fast and I have, I don't know if it's a photographic memory but I have a very effective memory; so much so that,uh, I can remember whole quotes from paragraphs of books that I read in the late 80s that I haven't touched since then. And so even, like, writing a book like, uh, Vintage Jesus has I think, like, six hundred footnotes--I would sit down and write the manuscript and just put in the bra[cket], the parentheses for my research assistant, like, `That's in Generous Orthodoxy', that's somewhere around page 160.' Now I haven't read that since,, like, `92 but I remember the quote, I remember the book, I remember the author, I remember the publisher, and I remember roughly where it's at in the book and so then she goes and finds it and makes all the footnotes. And so that speeds things along.

My wife isn't like that. She reads slow. It's laborious, it's prayerful, it's careful and so for her to work through a book takes a long time and I tend to go through books like chicken wings. ...

If Driscoll's memory is as formidable as his defenders would have us believe then the plagiarism that has been discovered becomes much less rather than more excusable.  But even if it were somehow argued that not even Mark Driscoll could possibly remember everything publishers, copy editors, proofreaders, and fact-checkers should have been able to flag down the citation errors before they ever hit print.  How did no less than seven of Mark Driscoll's published works end up having documentable citation problems?  If that is not considered in any way at all an indictment of Mark Driscoll as an author it still raises the question of how on earth so many publishers dropped the ball with Driscoll's books.  Even if we were somehow not ever discussing Mark Driscoll as a potential or actual plagiarist we would still be forced to consider a systemic problem in evangelical/Christian publishing that let such a controversy be possible in the first place.  The only way a controversy or scandal of this sort with Driscoll's books stops being about Driscoll is if it becomes a controversy about the ethics and practices of the Christian publishing and broadcasting industries at a regional and national level, of which Mark Driscoll would merely be a rather tiny part.

So far as possible Wenatchee The Hatchet has tried to quote Driscoll and others from Mars Hill over the years as accurately and as in context as possible.  It's been striking that in the last four months Mars Hill has made a point of purging maybe two thirds of Driscoll material.  At least in the past when people attempted to defend Driscoll's statements as misunderstood, misinterpreted, or misrepresented it was generally possible to go back to the primary source statements via audio or video or print and look at what was actually said compared to what people thought was said.  Now, well, now for a lot of Driscoll's more controversial statements in the last fourteen years that may not even be possible.  Is Mars Hill willing to live with the likely consequence of this?  After all, what this makes more likely is that a lot of misrepresentation or misunderstanding on the AlterNet/Salon side of things might just keep happening.  The factual errors were egregious enough in their coverage in the last four months that Wenatchee the Hatchet spent quite a bit of time fact-checking and correcting numerous and basic factual errors in the original published piece.

And given the number and scope of the controversies that Mars Hill executive elders have directly participated in, whether the citation problems in Real Marriage, the contract with Result Source to buy a #1 spot on the NYT bestseller list for Real Marriage, or crashing Strange Fire it has begun to seem as though most of the controversies Mars Hill has been embroiled in during this "trying season" wouldn't even have happened if the people on the BOAA and in executive leadership at Mars Hill had reconsidered a lot of what they'd been saying and doing circa 2011 and 2012.

And retroactively purging about two thirds of the audio and video evidence of Mark Driscoll's public ministry in the wake of a plagiarism/sales rigging double controversy hardly seems like the wisest way to manage either controversy.  It's not that they can't purge a lot of their media content, they clearly can and have done precisely that.  The problem is that now is probably not the best time to remove all that content if Mars Hill and its defenders have grown tired of so many outsiders misunderstanding or misrepresenting things that have been said or done by Mars Hill leadership over its history.

Meanwhile, the end of the fiscal year is tonight and someone wants to make sure folks remember. 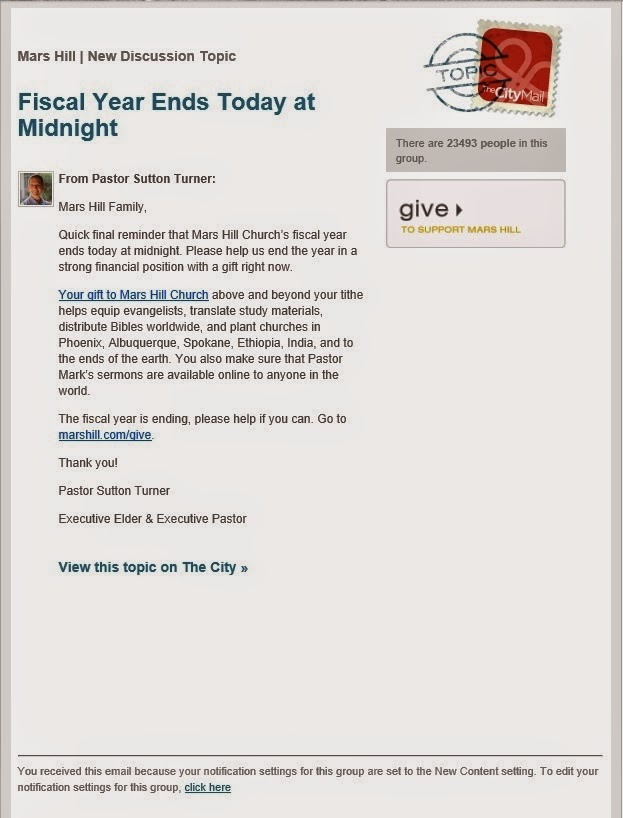 Posted by Wenatchee the Hatchet at 9:13 PM