a postscript on Jamie Munson's list of stated reasons for the immediate termination of Paul Petry and Bent Meyer, revisiting a MH fusilade against childrens ministry as stupid

Though the author of the responses to these FAQ is not always explicit ... the tone is set at question 1

1. How did Mars Hill Fellowship originate? It began with a discussion among myself and some of the leaders in my college ministry at Antioch Bible Church in 1996. The discussion was largely had with Mike Gunn and Lief Moi, who are now elders at Mars Hill. That discussion turned into a Bible study, which turned into a core group, which turned into Mars Hill. Our original desire was for a church focused on emersing itself with the gospel in the emerging postmodern world and upcoming generations 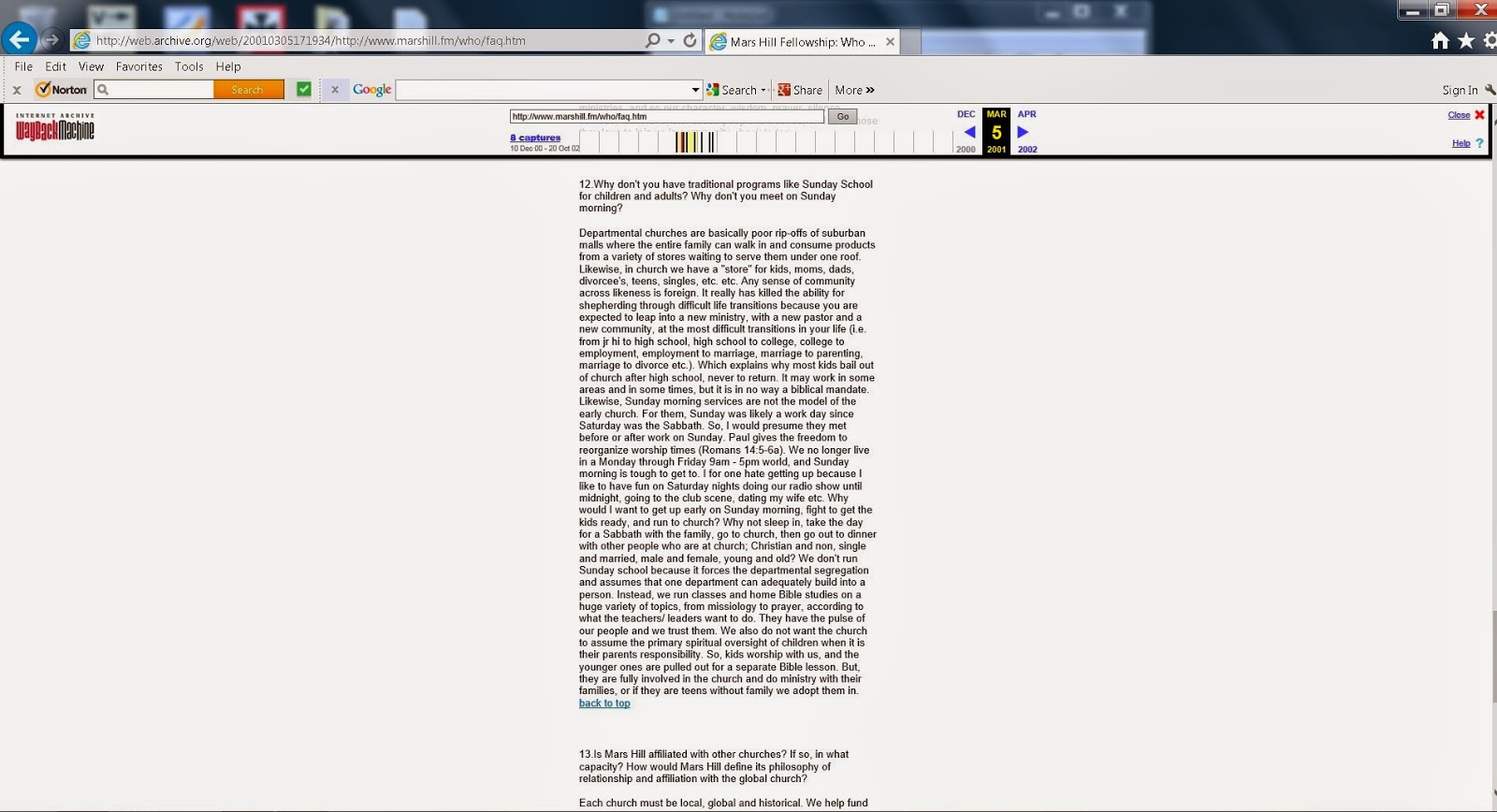 and for those who can't pull up images:
12.Why don't you have traditional programs like Sunday School for children and adults? Why don't you meet on Sunday morning?

Departmental churches are basically poor rip-offs of suburban malls where the entire family can walk in and consume products from a variety of stores waiting to serve them under one roof. Likewise, in church we have a "store" for kids, moms, dads, divorcee's, teens, singles, etc. etc. Any sense of community across likeness is foreign. It really has killed the ability for shepherding through difficult life transitions because you are expected to leap into a new ministry, with a new pastor and a new community, at the most difficult transitions in your life (i.e. from jr hi to high school, high school to college, college to employment, employment to marriage, marriage to parenting, marriage to divorce etc.). Which explains why most kids bail out of church after high school, never to return. It may work in some areas and in some times, but it is in no way a biblical mandate. Likewise, Sunday morning services are not the model of the early church. For them, Sunday was likely a work day since Saturday was the Sabbath. So, I would presume they met before or after work on Sunday. Paul gives the freedom to reorganize worship times (Romans 14:5-6a). We no longer live in a Monday through Friday 9am - 5pm world, and Sunday morning is tough to get to. I for one hate getting up because I like to have fun on Saturday nights doing our radio show until midnight, going to the club scene, dating my wife etc. Why would I want to get up early on Sunday morning, fight to get the kids ready, and run to church? Why not sleep in, take the day for a Sabbath with the family, go to church, then go out to dinner with other people who are at church; Christian and non, single and married, male and female, young and old? We don't run Sunday school because it forces the departmental segregation and assumes that one department can adequately build into a person. Instead, we run classes and home Bible studies on a huge variety of topics, from missiology to prayer, according to what the teachers/ leaders want to do. They have the pulse of our people and we trust them. We also do not want the church to assume the primary spiritual oversight of children when it is their parents responsibility. So, kids worship with us, and the younger ones are pulled out for a separate Bible lesson. But, they are fully involved in the church and do ministry with their families, or if they are teens without family we adopt them in.
So if by 2007 Mars Hill Church/Mars Hill Fellowship had a childrens' ministry then wouldn't some explanation within the leadership for why the church and internally embraced the suburban mall/store approach to ministry that Mark Driscoll publicly repudiated in 2001 warrant at least ... some discussion?  Now it may have been people felt the way Petry raised the subject of how and why this massive 180 turn on the legitimacy and existence of age-bracketed ministry within Mars Hill was not entirely polite or friendly ... but it's not difficult to go dig up Mark Driscoll's public denunciation of the very idea of a teen or college ministry from the earlier days of Mars Hill.  It's possible that Driscoll in his massive youthful ignorance and arrogance simply had no idea that age-bracketed ministries could actually work ... but as yet Driscoll has never given any public indications of what such a path of remorse and repentance from that particular early view was.

Meanwhile, Jamie Munson's stated reasons for Petry being terminated included the claim that Petry was critical of the Proxy something or other in some way without necessarily having a fuller context for why, according to Mark Driscoll's own stated views, that Munson would have been able to know about at any point since 1999 since he'd been an intern at Mars Hill, the mere existence of a ministry for teens would have been taken as a sign of a failure of community within a local church.

So on this particular singular charge/reason for termination, it may be that Paul Petry stuck by the early ideal articulated by Mars Hill leadership starting with no less than Mark Driscoll himself ... while the newly appointed Lead Pastor Jamie Munson apparently got the idea that whatever Petry said about the Proxy something or other and his attitude was part of the reasons for the "necessary" and "inevitable" termination of Paul Petry back in 2007.

And for those who were around at Mars Hill in 2007 what evidence for any of the aforementioned charges that Jamie Munson formulated was collected by the Elder Investigative Taskforce that consisted of Scott Thomas, Dave Kraft, Gary Shavey, and Steve Tompkins?  Shavey and Tompkins are still at Mars Hill so they could certainly field questions on behalf of Mars Hill by any and all potentially interested members, right?  Whether those profile numbers are still current is anybody's guess, of course.  But Scott Thomas and Dave Kraft have stopped being affiliated with Mars Hill in the last two years and it remains to be seen if either of them could recall what evidence was accumulated with respect to the charges Munson made against Petry and Meyer.  If they don't feel ready to address those kinds of things so it goes.  Kraft's expression of regret for being involved in the trials and voting the way he did has already been established.  The other members of the EIT, as yet, have not made any public statements about their participation in the EIT and the trial or what, if any, evidence was accumulated in the run-up to the trials.

Something for people at Mars Hill to at least consider in the run-up to the end of the fiscal year here.  If Mars Hill is going to sustain the trust of long-time members amid a challenging season full of controversy about Mark Driscoll's citation errors in half a dozen of his books and controversy surrounding Sutton Turner's signing a contract with Result Source Inc to rig a #1 spot for Real Marriage on the NYT bestseller list a way to increase trust and resolve among the laity might be to just produce the evidence for why the 2007 firings and trials were handled in an appropriate way and with an appropriate collective decision.  It's at least something to consider, anyway. After all, it seems the BOAA and the executive elders have merely conceded that rigging a bestseller list was a mistake and unfortunate and maybe even not entirely honest but there couldn't be anything remotely ... sinful about it.  And if there wasn't anything wrong with that what would be wrong with just naming who the "outside counsel" was that recommended the use of Result Source to begin with? There are many opportunities for transparency that Mars Hill leadership can take at this juncture.  As Mars Hill seems to be reaching out to people to give and give and give during a trying season how much they are really willing to share about where all the money goes and how they have conducted their, to be rather crude about it, political/governmental history, doesn't count as just a couple of mundane details.
Posted by Wenatchee the Hatchet at 1:20 AM

Email ThisBlogThis!Share to TwitterShare to FacebookShare to Pinterest
Labels: notes on the trial