on ten painful lessons from the early days of Mars Hill, lesson 1- Driscoll said "I was doing all of the premarital counseling" so what were Mike Gunn and Bent Meyer doing being publicly listed as handling that task?

... For the first five or six years of Mars Hill, I was the only paid pastor on staff and carried much of the ministry burden. I was doing all the premarital counseling and most of the pastoral work as the only pastor on staff. [emphasis added] This went on for years due to pitiful giving and a ton of very rough new converts all the way until we had grown to about 800 people a Sunday. At one point I literally had over a few thousand people come in and out of my home for Bible studies, internships, counseling, and more. My phone rang off the hook, my email inbox overflowed, my energy levels and health took a nose dive, and I started becoming bitter and angry instead of loving and joyful. It got to the point where either something had to change or I was going to go ballistic and do something I really regretted.

Well, the unfortunate thing is that it's one thing for Mark Driscoll to simply assert that he did all the premarital counseling and another thing to just go back to the old marshill.fm site to found out who was publicly listed as actually doing that.  Because ... it sure looks like Mike Gunn's name is listed with those ministry activities, doesn't it? 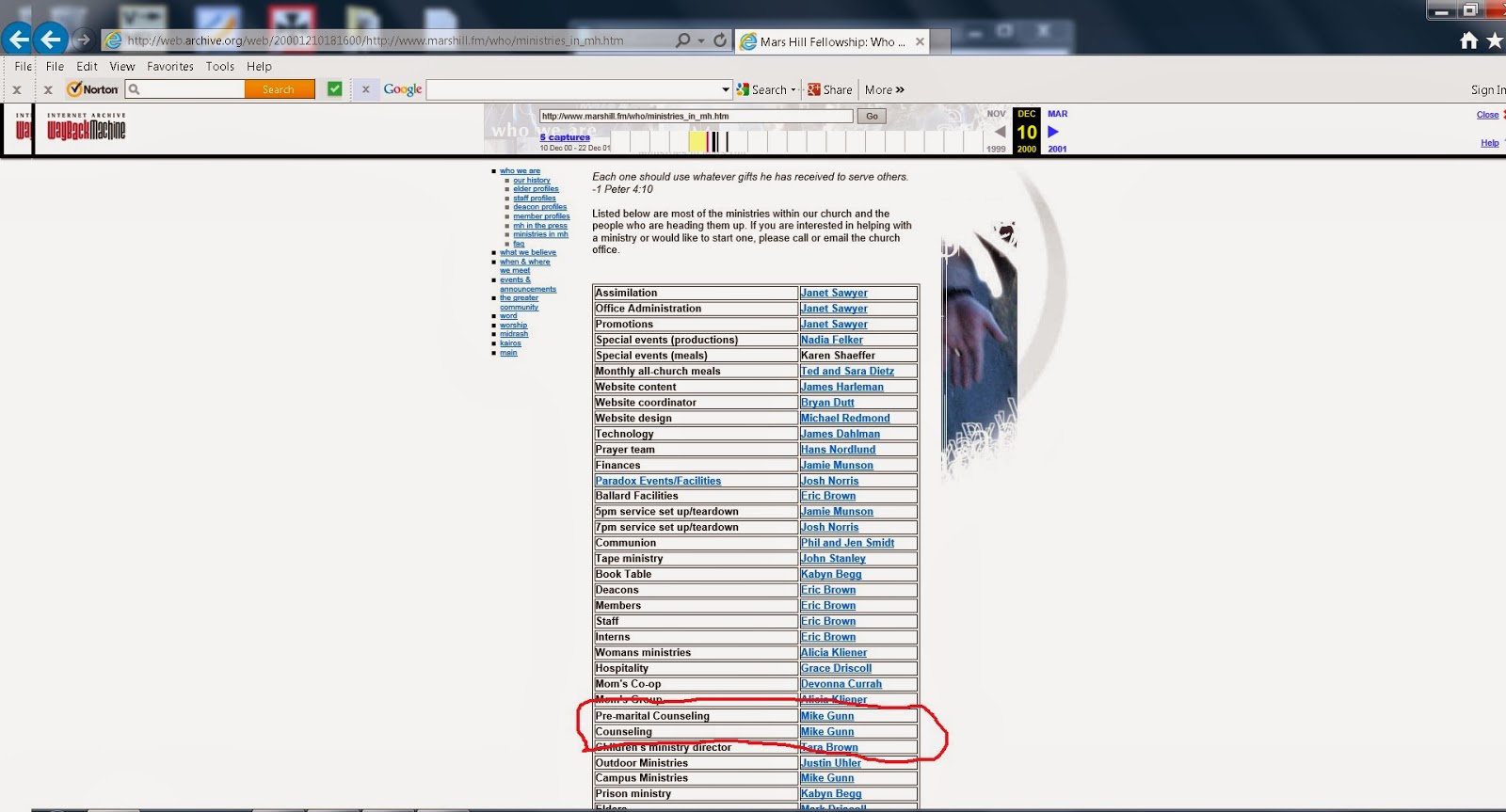 In fact Mike Gunn was listed at marshill.fm as handling premarital counseling and counseling at every capture point right up until ...

... December 22, 2001 and who, pray tell, ended up being publicly listed as handling premarital counseling and counseling? 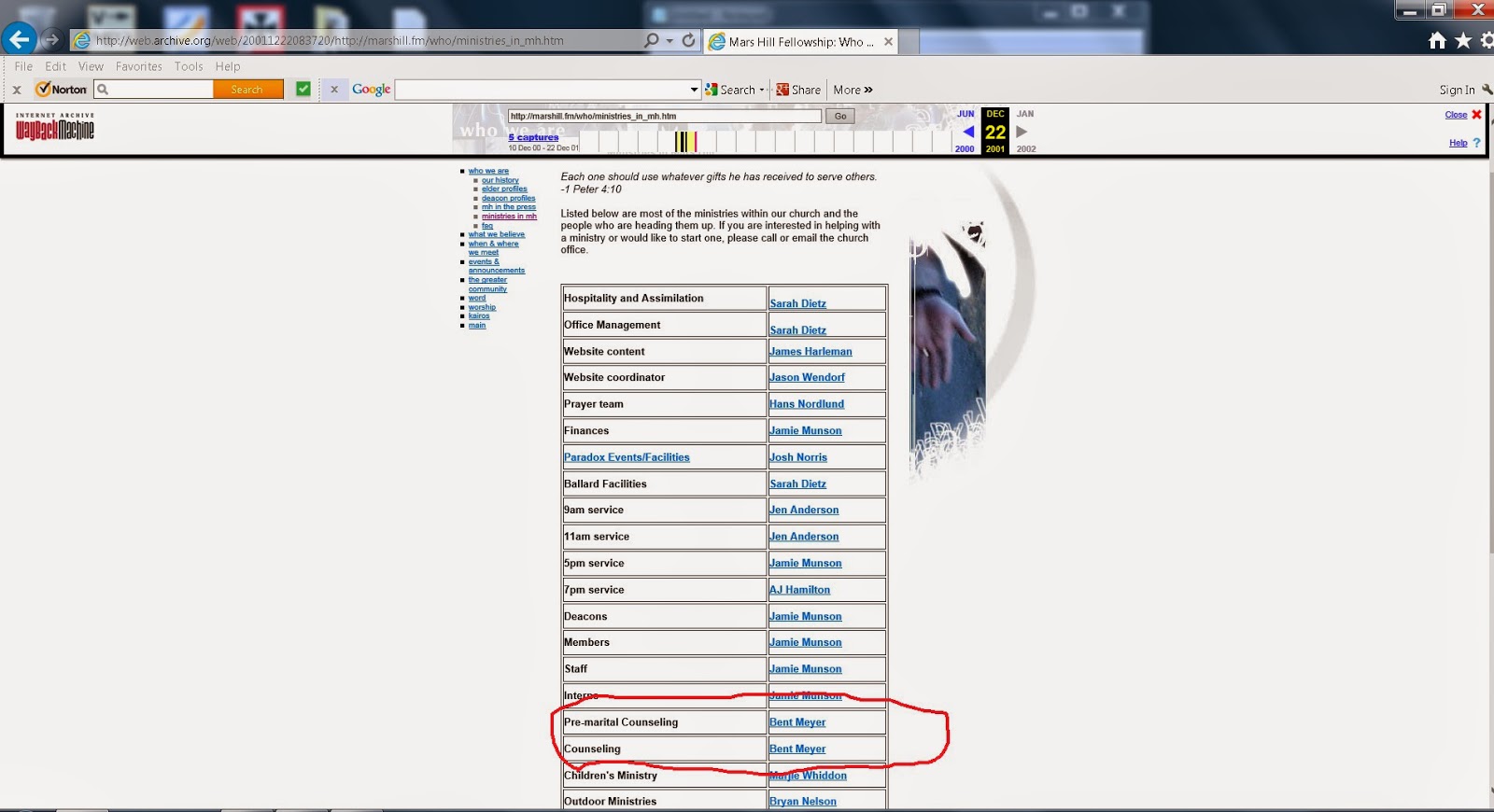 Oh, wow, would you look at that?  Bent Meyer.  So let's see, by December 2000 Mike Gunn was publicly listed as the elder at Mars Hill Fellowship handling premarital counseling and counseling and this stayed steady, at least according to screen captures from The WayBack Machine, until December 22, 2001 when Bent Meyer began to be listed as handling those ministries within Mars Hill Fellowship.  So how on earth could Mark Driscoll have somehow been the only elder in any capacity shouldering the great and difficult burden of premarital counseling at Mars Hill Church?

For sake of review let's revisit what Mark Driscoll shared about the appointment of Bent Meyer to pastoral counseling from Confessions of a Reformission Rev.

To make these transitions, I needed to hand much of my work load to my elders and deacons so that I could continue to concentrate on the future of expansion of our church.  In some ways I longed for this day because it meant the weight of the church would be off my shoulders and shared with many leaders. In other ways I lamented not being able to invest in every young couple, experience the joy of officiating at so many weddings, or know everything that was going on in the church.

I asked our newest and oldest elder, Bent, to take over the counseling load that I had been carrying. [emphasis added] He was the first person to join our church who had gray hair, and he and Filipino wife, Joanne, were like rock stars with groupies since all the young people wanted to hang out with these grandparents that loved Jesus. My problem was I loved our people so much that if I got deeply involved in the pain of too many people's lives, it emotionally killed me, and I needed to do less counseling.

Now, of course, it's possible Mark Driscoll may have done "all" the premarital counseling prior to some point in 2000 when Mike Gunn began to be publicly listed as handling that ... and maybe it's possible that even though Mike Gunn was publicly listed as handling premarital counseling for Mars Hill right up to the point that Bent Meyer got listed publicly as handling that instead that maybe, just maybe, Mark Driscoll wouldn't let them do any of that so that he could counsel couples considering marriage.

from pages 14-15
In the second year of the church we had a lot of single people getting married, and so I decided to preach through the Song of Songs on the joys of marital intimacy and sex. The church grew quickly, lots of people got married, many women became pregnant, and my counseling load exploded. [emphasis added] I started spending dozens of hours every week dealing with every kind of sexual issue imaginable. It seemed as if every other young woman in our church had been sexually assaulted in some fashion, every guy was ensnared by porn, and every married and premarital couple had a long list of tricky sex questions. Day after day, for what became years, I spent hours meeting with people untangling the sexual knots in their lives, reading every book and section of the Bible I could find that related to their needs.

Although I loved our people and my wife, this only added to my bitterness.  I had a church filled with single young women who were asking me how they could stop being sexually ravenous and wait for a Christian husband; then I'd go home to a wife whom I was not sexually enjoying. [emphasis added] One particularly low moment occurred when a newly saved married couple came in to meet with me. I prayed, and then asked how I could serve them. She took charge of the meeting, explained how she really liked her body and sex, and proceeded to take out a list of questions she had about what was acceptable as a Christian for her to do with her husband. It was a very long and very detailed list. As I answered each question, she would ask related follow-up questions with more specific details. Her husband said very little, but sat next to her, looking awkward and smiling at most of the answers I gave.  After they left the counseling appointment to get to work on the list of acceptable activities, I remember sitting with my head in my hands, just moaning and asking God, "Do you really expect me to do this as a new Christian, without a mentor or pastor, in the midst of my marriage, and hold on for the next fifty years?" Peter walking on water seemed an easier task.

So by his own account Driscoll decided, in spite of his own bitterness and resentment toward his own wife on the subject of sex, to make a point of preaching through Song of Songs.  And the church grew quickly because of that?  What a surprise.

So if doing all the premarital counseling (assuming he even really did all of it) just made Mark Driscoll more bitter toward his wife why even ask God if God wanted Mark Driscoll to sit in an office and listen to young sexually ravenous women share stories about how they wished they could just stop being sexually ravenous and wait for a good husband.  There were, as we've amply demonstrated, other older men who had ministry roles inside Mars Hill.  And "maybe" Mark Driscoll handed off counseling duties to those men at some point but the narrative in Real Marriage conveys that Mark kept getting more resentful on the issue of sex and not less.  And apparently this despite, by his 2006 account, of having handed of counseling duties to Bent Meyer, who was brought on some time around ... 2002?

But here's the thing, whether it's the 2011 Mark Driscoll account about how he did all the premarital counseling or the 2012 Mark Driscoll account about how frustrating it was to preach Song of Songs and then find out all these youngsters about his age wanted his opinion, as a pastor, on all those "Can We ______?" things; it's not as though Driscoll "had" to do any of this stuff.  Driscoll didn't have to agree to any premarital counseling in any pastoral capacity that might lead him to resent his wife more than he already did on the subject of sex.  In Mark Driscoll's narrative who seems to be responsible for Mark Driscoll preaching Song of Songs and then having to deal with the counseling fall-out of a bunch of new Christian converts who don't know anything about the biblical literature Driscoll preached from and more or less transformed into a sexual pyrotechnics manual in the midst of resenting his frigid wife .... ?  The answer does not appear to be "Mark Driscoll" ... but God.

And as we've shown from about half a year's worth of screen captures from the marshill.fm site courtesy of The WayBack Machine (because robots.txt wasn't applied very thoroughly, Mars Hill, just so you know) there's plenty of evidence that Mark Driscoll simply wasn't the only person who did premarital counseling in the first five or six years of the church.  There's no way you don't hit the year 2000 within five years after a church started in 1996.

Maybe Driscoll stopped doing any premarital counseling by about 1999 or even mid-2000, but at this point the main observation is this--

Ari & I were married the day before this referenced screen capture. Mark officiated our wedding and did our pre-marriage counseling.

Shortly after that, I began serving as wedding coordinator, along with Andrea Dahlman - who had previously been the only WC for the entire church. Within a few months, Andrea transitioned out & I took over.

During the time that I served with Andrea, and for nearly two years serving solo, MD officiated every wedding (as far as I can remember). Part of my job included pre-wedding meetings with each couple. I was aware of the counseling they were in because of those meetings. If I recall, MD and the Smidts were doing most of it, if not all.

Mike Gunn was primarily involved in Campus Ministry & the Outdoor Ministry. I never worked with him on a wedding.

I believe Bent was handed more of the personal counseling which went hand in hand with Grace Groups. He began to do some officiating around 2002, I think, along with Lief Moi - who then became my go-to elder for the Wedding Ministry. It was around that time that I developed a team of a dozen-ish coordinators. That's when it officially became The Wedding Ministry, led by me as deacon & Lief as pre-married counselor and overseeing elder.
Several elders began officiating weddings at that point, including MD.

Since Driscoll mentioned that he did all the premarital counseling in the first five or six years if Meyer and the Smidts were involved in premarital counseling then, well, Driscoll's account is still rather hazy. It still sounds like "all" would have to be taken in a Calvinist-style limited atonement way ... but it's not at all surprising if the old marshill.fm was jacked up on a few points. After all ... there was that Midrash. :)

Right, Midrash...where those who had stones, were invited to throw stones. ;) Or something meathead like that.

To be fair, my account is hazy as well. It's possible he did do ALL the pre-married counseling for the first 5-6 years. In the four years that I served in that ministry (2001-2005), my main pastoral contact was regarding the officiant, rather than the counselor; though to reiterate, my experience was that it was at least primarily Mark (if not all) up until 2002-ish.

Plus, I was either pregnant or sleep deprived with two babies born in that time frame, so who knows...maybe it was Rob Bell. :)