a question about the narrative of Real Marriage, if there was nobody to talk to ... what about all the men Mark name-dropped as his pastors who helped him in those early years?

Before long I was bitter agaisnt God and Grace. It seemed to me as if they had conspired to trap me. I had always been the "good guy" who turned down women for sex. In my twisted logic, since I had only slept with a couple of women I was in relationships with, I had been holy enough, and God owed me. I felt God had conned me by telling me to marry Grace, and allowed Grace to rule over me since she was controlling our sex life.

PAGES 14-15
Although I loved our people and my wife, this only added to my bitterness. I had a church filled with single women who were asking me how they could stop being sexually ravenous and wait for a Christian husband; then I'd go home to a wife whom I was not sexually enjoying.
... We still disagree on how often we had sex (I [Mark Driscoll] was bitter, and she [Grace Driscoll] was in denial, which skews the perspective), but we both agree it wasn't a healthy amount to support a loving marriage.

page 26We didn't know how to talk through these extremely hard issues without hurting each other even more, so we didn't talk about them at all. I just got more bitter, and Grace just felt more condemned and broken, like a failure. Occasionally we'd meet a Christian pastor or counselor who was supposed to be an expert in these areas, but we never spoke with them in much detail, because in time we found out they either had marriages as bad as ours our they had been committing adultery and were disqualified for ministry. We felt very alone and stuck. [emphasis added]

... As with many things in marriage, communication is key. When I cam to the conclusion that the cure for a lot of my moodiness was having more frequent sex with my wife, I simply told her. Yes, it's that simple. For years when I would endure depression, I tried to talk to Grace about it. Her natural inclination was to want to have long talks about our feelings toward each other, and I know that connecting with her like this is important. But sometimes I was just too frustrated and ended up blowing up and hurting her feelings.  The truth was I wanted to have more frequent sex with my wife, and we needed to discuss how that could happen.

... For a wife, sex comes out of a healthy relationship, whereas, for a husband it leads to one.

Now it might seem that the Driscolls recount not having anyone at all to talk to and yet in the 2001 stage of Mars Hill, Mark Driscoll rattled off a list of people he described himself as accountable to.
And the idea that somehow Mark Driscoll didn't have any older guys or pastoral people to contact during this earlier stage would seem hard to believe. Why?  Well ... 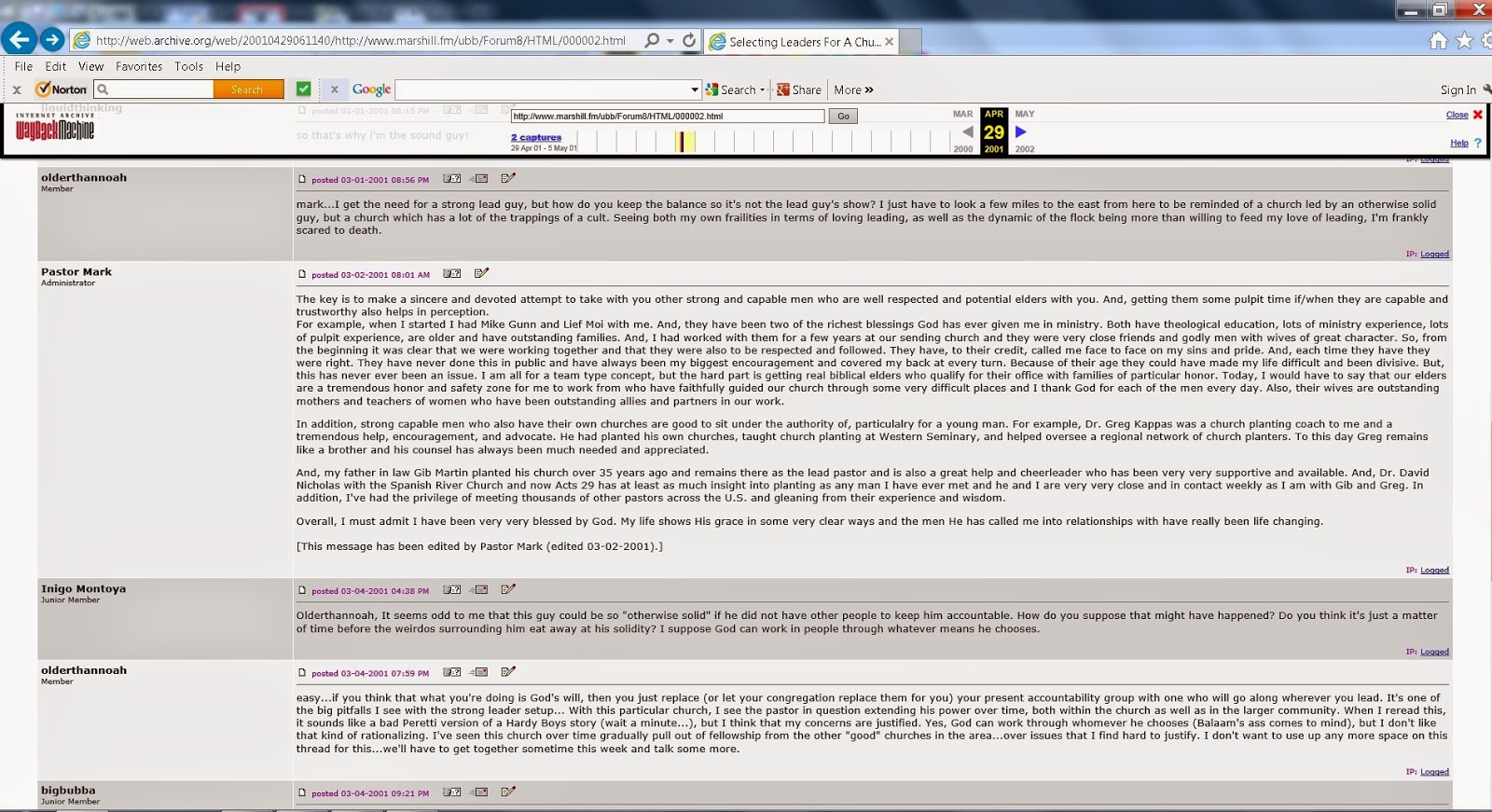 The key is to make a sincere and devoted attempt to take with you other strong and capable men who are well respected and potential elders with you. And, getting them some pulpit time if/when they are capable and trustworthy also helps in perception.

For example, when I started I had Mike Gunn and Lief Moi with me. And, they have been two of the richest blessings God has ever given me in ministry. Both have theological education, lots of ministry experience, lots of pulpit experience, are older and have outstanding families. And, I had worked with them for a few years at our sending church and they were very close friends and godly men with wives of great character. So, from the beginning it was clear that we were working together and that they were also to be respected and followed. They have, to their credit, called me face to face on my sins and pride. And, each time they have they were right. They have never done this in public and have always been my biggest encouragement and covered my back at every turn. Because of their age they could have made my life difficult and been divisive. But, this has never ever been an issue. I am all for a team type concept, but the hard part is getting real biblical elders who qualify for their office with families of particular honor. Today, I would have to say that our elders are a tremendous honor and safety zone for me to work from who have faithfully guided our church through some very difficult places and I thank God for each of the men every day. Also, their wives are outstanding mothers and teachers of women who have been outstanding allies and partners in our work. 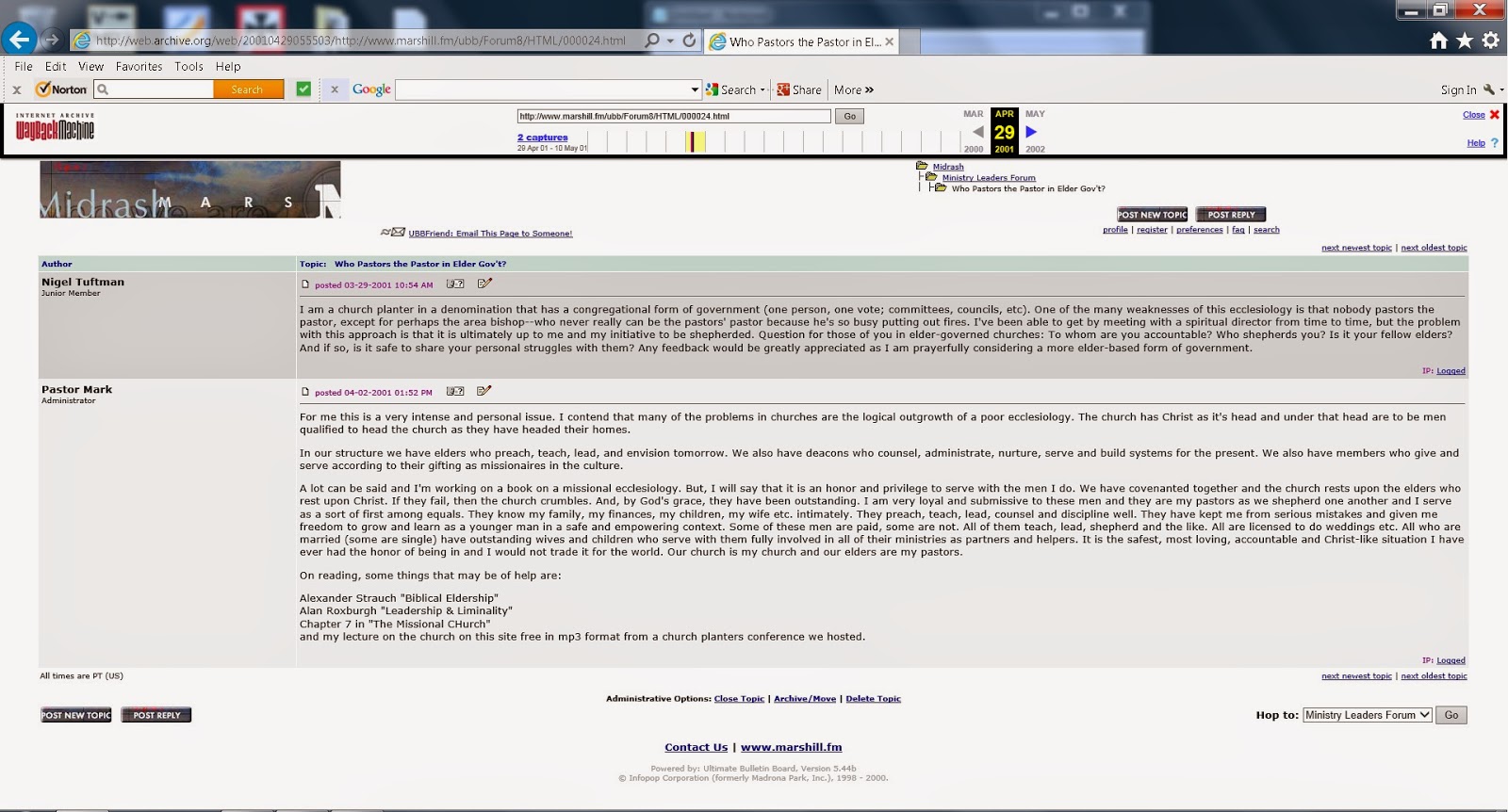 Yet according to the narrative Mark and Grace Driscoll presented in Real Marriage in 2012 there was nobody they felt they could talk to about what was sexually dysfunctional in their own marriage?  By the Driscolls' account Grace's family was one of Mark's particular points of unhappiness in the earlier years of the marriage (see pages 10-11 in Real Marriage).  So in spite of public statements of praise and affection for Gib Martin, Real Marriage has since revealed that the private reality of Mark Driscoll's sentiments toward his father-in-law may have been a bit more resentful, by Mark and Grace Driscoll's account, than what Mark Driscoll put on the old marshill.fm site.

Or ... another possibility is that the narrative in Real Marriage is so difficult to square with so many years of public testimony given by Mark Driscoll about how intimately he was known by the co-founding pastors of Mars Hill and the regard with which he held his father-in-law and Grace's family that the narrative of Real Marriage could actually raise more questions about the early documented history of Mars Hill as conveyed by Mark Driscoll than it may answer.  IF Mark Driscoll's marriage was so fraught how are we supposed to understand the co-founding pastors of Mars Hill not being aware of this?  Was this because the Driscoll's didn't share that?  Did the others in the earlier years of Mars Hill just not observe that something was wrong?

Driscoll name-dropped at least five people he considered to play a pastoral role in his life and yet the narrative of Real Marriage would make it seem as though Mark and Grace Driscoll were terribly alone.  If they were it's not entirely clear because they were actually alone within the history of Mars Hill, and they wouldn't have seemed alone in not having older men with pastoral and ministry experience Driscoll could turn to.  But if by some chance Mark Driscoll didn't want anyone to know how functional-but-not-much-fun his marriage was because he felt anyone with a marriage as fraught as his wasn't able to help them or adultery disqualified them from ministry.  But the thing is Mark and Grace Driscoll apparently saw no problem with counseling hundreds of couples in spite of their own marital strife so if what was sauce for the goose was unacceptable why was it just fine for the gander?  If the Driscolls had followed the precepts they seem to lay out in the early pages of Real Marriage then they should have refrained from giving any marital advice to anyone at all if they were uncomfortable getting marital advice from anyone or any couple with a marriage that had the same kinds of problems they had.

Is the word people use for that kind of scenario ... hypocrisy ... maybe?  As previously noted, it's not as though there weren't other pastors in the history of the earlier years of Mars Hill who couldn't do premarital and other counseling.

The review of Real Marriage that has been developing here at Wenatchee The Hatchet has not reviewed the book so much as a marriage/self-help manual as other blogs and writers have, but rather has taken up working through Real Marriage for the history of Mars Hill it presents because at this point nobody would contest that Mark Driscoll and to a lesser extent Grace Driscoll have been made so inextricable to the public history of Mars Hill that, in essence, the only significant selling point the Driscoll book would have in the realm of marriage/self-help books would simply be the Driscollian narrative.  The trouble is, for those who were around Mars Hill in the earliest years, the narrative presented in the bought-a-spot-on-the-NYT-bestseller list book is not just that there turned out to be plagiarism in the book, it's that the narrative the Driscoll's presented in their 2012 book practically overturned the narrative of their life within Mars Hill as they had shared it from circa 1999 to 2012.  Those of us who called Mars Hill home up through the 1996-2007 period might get the impression that the public narrative about how happy the Driscolls were in their marriage was some kind of sham.  What is even more striking about the narrative in the 2012 Driscoll book is how much drastic alterations to governance were considered crucial to improving elements of the Driscoll marriage.  If so, then, well it makes it all the more necessary Mars Hill Church publicly account for the way the terminations and trials of 2007 were conducted then, right?
Posted by Wenatchee the Hatchet at 1:25 AM

Email ThisBlogThis!Share to TwitterShare to FacebookShare to Pinterest
Labels: governance, notes on the trial, real marriage