as Greg Kappas is being an officer connected with Mark Driscoll's new church plant it's worth asking what Kappas thinks will be different this time compared to the first church plant of Driscoll's he advised, Mars Hill


One of the things I've been thinking about since Throckmorton discussed the 990 forms of Mark Driscoll Ministries are those officers Tope Koleso and Greg Kappas.  That would be because of these things mentioned by Mark Driscoll decades ago.

http://web.archive.org/web/20001210191200/http://www.marshill.fm/who/our_history.htm
...
In the second season, Grace and I began attending Antioch Bible Church in Kirkland, where we volunteered our time working with their college ministry. We then located in Seattle to be closer to students and after a few months I was brought on staff as a part-time intern to oversee the college group. I served in that position for nearly two years and learned a great deal in my first position of ministry leadership in a church. At that time I met Mike Gunn who had moved from a pastorate in Southern California to begin a ministry to athletes at the University of Washington. I also met Lief Moi, a local radio show host, who came in to teach a class for us. These two men and their wives and children became like family and together we began dreaming about the possibility of planting an urban church for an emerging postmodern generation in one of the least churched cities in the U.S. We began praying, studying the scriptures, reading a great deal on postmodernity, and dialoging together to formulate a philosophy of ministry appropriate for our context. Helping us formulate our launch plan was Dr. Greg Kappas, who graciously mentored us and provided wise insight and counsel. [emphasis added]
asfsaf 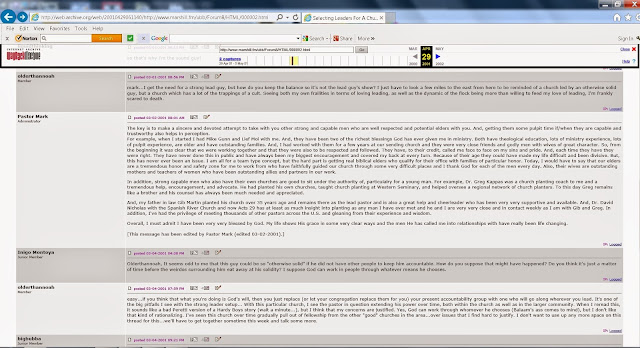 The key is to make a sincere and devoted attempt to take with you other strong and capable men who are well respected and potential elders with you. And, getting them some pulpit time if/when they are capable and trustworthy also helps in perception.  For example, when I started I had Mike Gunn and Lief Moi with me. And, they have been two of the richest blessings God has ever given me in ministry. Both have theological education, lots of ministry experience, lots of pulpit experience, are older and have outstanding families. And, I had worked with them for a few years at our sending church and they were very close friends and godly men with wives of great character. So, from the beginning it was clear that we were working together and that they were also to be respected and followed. They have, to their credit, called me face to face on my sins and pride. And, each time they have they were right. They have never done this in public and have always been my biggest encouragement and covered my back at every turn. Because of their age they could have made my life difficult and been divisive. But, this has never ever been an issue. I am all for a team type concept, but the hard part is getting real biblical elders who qualify for their office with families of particular honor. Today, I would have to say that our elders are a tremendous honor and safety zone for me to work from who have faithfully guided our church through some very difficult places and I thank God for each of the men every day. Also, their wives are outstanding mothers and teachers of women who have been outstanding allies and partners in our work.


and yet as we've noted earlier.

"Yet according to the narrative Mark and Grace Driscoll presented in Real Marriage in 2012 there was nobody they felt they could talk to about what was sexually dysfunctional in their own marriage?  By the Driscolls' account Grace's family was one of Mark's particular points of unhappiness in the earlier years of the marriage (see pages 10-11 in Real Marriage).  So in spite of public statements of praise and affection for Gib Martin, Real Marriage has since revealed that the private reality of Mark Driscoll's sentiments toward his father-in-law may have been a bit more resentful, by Mark and Grace Driscoll's account, than what Mark Driscoll put on the old marshill.fm site.

Or ... another possibility is that the narrative in Real Marriage is so difficult to square with so many years of public testimony given by Mark Driscoll about how intimately he was known by the co-founding pastors of Mars Hill and the regard with which he held his father-in-law and Grace's family that the narrative of Real Marriage could actually raise more questions about the early documented history of Mars Hill as conveyed by Mark Driscoll than it may answer.  IF Mark Driscoll's marriage was so fraught how are we supposed to understand the co-founding pastors of Mars Hill not being aware of this?  Was this because the Driscoll's didn't share that?  Did the others in the earlier years of Mars Hill just not observe that something was wrong?  "

So, to put it another way, Greg Kappas is an officer in Mark Driscoll Ministries these days but decades ago he was involved in advising the launch plan for what would become Mars Hill Church.

So with that background in mind a question that lingers is why Greg Kappas might think things will be more likely to end better this time?  Given the way things ended at Mars Hill what does Kappas think can be done differently now?  Consider the way Driscoll described his conversion process in "Seasons of Grace" way back at the dawn of the millennium.

In the first season, in the fall of 1989, God was in the process of drawing me unto Himself. While attending Washington State University I began reading such classics as Augustine and Aquinas, and read through the New Testament in less than two weeks from the Bible my girlfriend Grace gave me as a high school graduation present . Aware of what God was orchestrating, but still unyielding in my heart, I had one Christian friend who asked me over a burger one late night what I was planning on doing for my career. I told him that God was going to make me a Christian and send me out to plant churches like I had read about Paul. He laughed, unsure if I was mocking him, being serious, or trying to discourage him from giving me any more goofy tracts. Within a month, my lingering struggles with the Gospel disappeared and I began teaching a Bible study and attending a solid church pastored by Doug Busby. In the spring of 1990 I attended my first retreat and after a late night of worship with a few hundred farmers and college professors I knelt down by an Idaho river and prayed. It was at that time that I quite unexpectedly received my call. God told me, "Mark, I have called you out from among many to lead men." I then began to serve in leadership for a ministry, and also became the editor for the opinions section of the campus newspaper; an adventure that included bomb threats, protests, and a handful of heated public debates. Grace transferred to WSU and we were married in the summer before my senior year. Upon graduation Grace and I moved to Seattle without a place to live, jobs to pay the bills, or a church to attend, but determined to somehow begin planting churches.

"Quite unexpectedly" Driscoll wrote, despite having just a few sentences earlier written that he declared he was going to be made a Christian by God, who would send Mark Driscoll out to plant churches like Mark said he'd read about in Paul.

One of the tropes in American evangelical conversion experiences is to talk about how little X wanted to do Y but in the case of Mark Driscoll we see him recounting that he believed his career was going to be planting churches even before people, by Driscoll's own account, could be entirely sure they could believe Mark Driscoll was even a Christian.  So how could it be quite unexpected that God would call Mark Driscoll to do the stuff Mark Driscoll said he was willing to announce he would be doing as a career before even he might have considered himself a Christian within his own narrative?

Posted by Wenatchee the Hatchet at 6:36 AM