Where are they now part 6D, a Tim Smith follow up, documenting his role as

Wenatchee The Hatchet has spent several posts documenting the role of Tim Smith in the earlier years of Mars Hill Church.

Well ... one of the things noted in part b was how Smith made a case to Mark Driscoll to let him run the entire worship department.  Exactly when this conversation transpired is not entirely clear and to some degree a screen capture from the old marshill.fm site makes things even less clear. 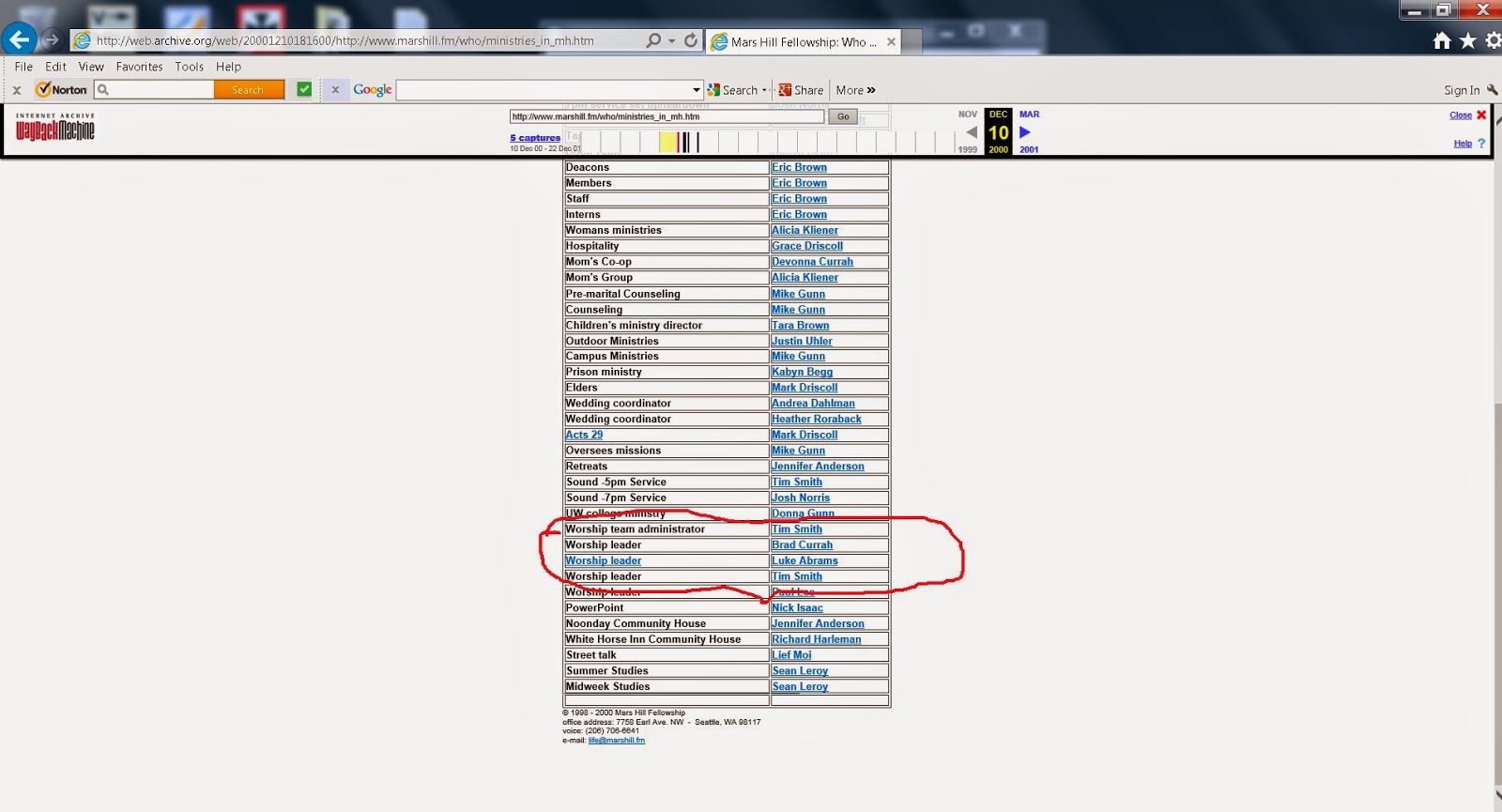 According to the WayBack Machine screen capture from December 10, 2000 Tim Smith was already the worship team administrator.  Now let's recall that Mark Driscoll described letting go the worship leader from the earlier years of Mars Hill in the following way:

CONFESSIONS OF A REFORMISSION REV
MARK DRISCOLL
(C) 2006 BY MARK DRISCOLL
ZONDERVAN
ISBN-13:978-0-310-27016-4
ISBN-10:0-310-27016-2
CHAPTER FIVE, 350-1,000 PEOPLE
page 135
We had to quickly reorganize all of our systems and staff.  Our administrative pastor, Eric, left, which we all recognized was God's call on him.  And our worship leader was a great guy and great musician but was unable to coordinate the multiple bands in the three locations, so we let him go. This was one of the hardest decisions I've ever made because he was a very godly man who had worked very hard and would have been fine if the church had not gotten so crazy so quickly, and he and his very sweet wife were both close personal friends of mind. But I needed a worship pastor who could lead multiple bands, coordinate multiple services in multiple locations, and train multiple worship pastors while keeping up with a church that was growing so fast that we had no idea exactly where it was going. I had no one who could possibly fill this role but felt compelled to wait until God let me know, so I just left a gaping hole in our leadership to create a crisis that would force a leader to emerge. [emphasis added]

As established from earlier posts on this topic (Mr. Smith) actual musical competence was not really a requirement for Mark Driscoll.  That could be paid for once someone with suitable leadership potential as far as Driscoll assessed that had finally been found.
Let's remember that the eighth season was basically 1998.
http://web.archive.org/web/20001210191200/http://www.marshill.fm/who/our_history.htm
Seasons of Grace: The Story of Mars Hill
By Pastor Mark Driscoll

... In the eighth season, our worship ministry was in great disarray and I had a dream that Brad Currah, who had been a member of our core group before the launch, was leading worship. I repeatedly informed Brad that he was to be our worship leader and after numerous conversations he began volunteering time overseeing the worship and arts ministries. [emphasis added] Brad had spent a few years playing the club scene with his band Springchamber, but was quickly overwhelmed with the demands of his first time pastorate and quit his job at Microsoft to free up time for ministry and hoped to live off of his wife Devonna's salary. But, she soon became pregnant and needed to quit her job. I then got a call from a pastor in Florida who had a network that funded church plants. Grace and I met with Pastor David Nicholas at Spanish River Church, and his church planting network agreed to help us financially. This gift allowed us to bring Brad on full-time, which has culminated in a fantastic independent worship album, multiple worship teams, and an aggressive set of new songs written by some of our many gifted artists. [emphasis added]

So despite what would appear to have been a dream Mark Driscoll claimed he had that Brad was leading worship and despite even going to the trouble to convincing David Nicholas to part with enough money to bring Brad Currah on full-time for ministry in his first time pastorate ... by the year 2000 Tim Smith was publicly listed as the administrative person organizing things.  By Tim Smith's account Mark Driscoll claimed God had given him a dream that he and Smith would be working together.  Apparently divine oracles were relatively common for Driscoll in spite of his tendency during this period to self-identify as a cessationist?

Tim Smith came to Mars Hill Church in the summer of 1999, never having owned an electric guitar, been in a band, or written a song. Somehow, by God’s grace, he became the worship pastor there and has been able to hang on and give shape to a movement of well over 30 worship bands leading many campuses. Tim is the husband of Beth and the father of three daughters. He also leads Re:Sound, a missional network of music and artists here on the Resurgence.

By 2000 Smith was worship team administrator.  For sake of review:

MD: At the time we were at a place as a church that things were very disorganized, very loose. We had a number of good musicians but we didn't have any good leadership to really put it all together.  I remember you came into my office one day and said, "Give me the whole department, music and worship [TS smiles and nods] Let me give it a shot and if I do a good job then bring my on staff and if I don't do a good job then don't bring me on staff.  But at that point ... I don't think you ever played an electric guitar.
TS: Hnn-nn [shakes his head]
MD: You had never played in a band
TS: [smiling] No
MD: And, dude, I love you but you know you could not sing.
TS: Yeah, I was not a good singer.
MD: You know it sounded like you got captured by al-Qaeda [TS laughs] It was terrible. So I was, like, "Okay, you want to run the music department
... but you were a really good leader and I had a really, really, I loved you and had a good friendship with you and just felt like we were brothers right off the beginning of the relationship, and saw in you good teaching ability, love for the Bible, good leadership, you do have a sweet wife and you guys were getting your life put together. And so you took it and the first thing you did was fire everybody and cancelled everything. [TS laughs], bought an electric guitar, got vocal lessons  [TS laughs], put some things together. So you've been with us, then, for ten years. [emphasis added]
So in spite of Smith's lack of demonstrable musical competence Driscoll felt like he and Smith were brothers right off the bat at the start of the relationship and Driscoll saw potential in Smith, so Smith was given the whole music department.  Was this as far back as 2000?  In any case, by Mark Driscoll's account in 2008 the first thing Tim Smith did was fired everybody and cancelled everything., whenever that officially or unofficially began.  Whether or not Mark Driscoll directly let Brad Currah go or whether there was another party or two in the "we" that let the worship leader go has not yet come to light with any documentable certainty.  But it is at least "possible" that because Tim Smith, in the account of Mark Driscoll, lobbied to run the music department Smith could have been involved ... or not.  But by this time Currah had been, from the sound of things, brought on full time with a stipend of some kind provided by David Nicholas and yet Currah was, in the larger history of Mars Hill, basically canned almost as soon as everything was in place for him to even start doing his apparently Mark Driscoll's-dream-predicted job.

Posted by Wenatchee the Hatchet at 9:51 PM

Email ThisBlogThis!Share to TwitterShare to FacebookShare to Pinterest
Labels: Gods work our witness, smith, where are they now