Well, regular readers know by now that here at Wenatchee The Hatchet we try to keep track of the history of real estate acquisitions associated with what will soon (at some point) be the corporation formerly known as Mars Hill Fellowship/Mars Hill Church.

Last year we saw that what has become Trinity West Seattle ended up buying the real estate for what was once Mars Hill West Seattle.

Ironically a decade ago Mark Driscoll shared how faithful people who were at that church at one point ended up buying back the real estate from a church/denominational organization that went off the rails.  It looked vaguely like history could have been repeating itself ...

Mars Hill Church ended up doing a deed in lieu of foreclosure/contract forfeiture for what was once the Mars Hill corporate headquarters.

We're approaching the tenth anniversary of Confessions of a Reformission Rev, the book in which Mark Driscoll confidentally predicted a bright and bustling future for that real estate that not too long ago was a case of, it seems, handing the property back to the lender because nobody's buying it. What was going to be Ballard campus 2 seems to have amounted to not a whole lot more than a boondoggle over the last ten years ... just WtH's opinion there.

But ... there's been a piece of real estate up until recently unaccounted for.  Wenatchee The Hatchet figured at some point the real estate that was formerly Mars Hill U-District might end up subject to a transaction.  It appears that as of March 10, 2016 Cross & Crown Church managed to buy the real estate from Mars Hill for a gross sale price of about $1.8 million. 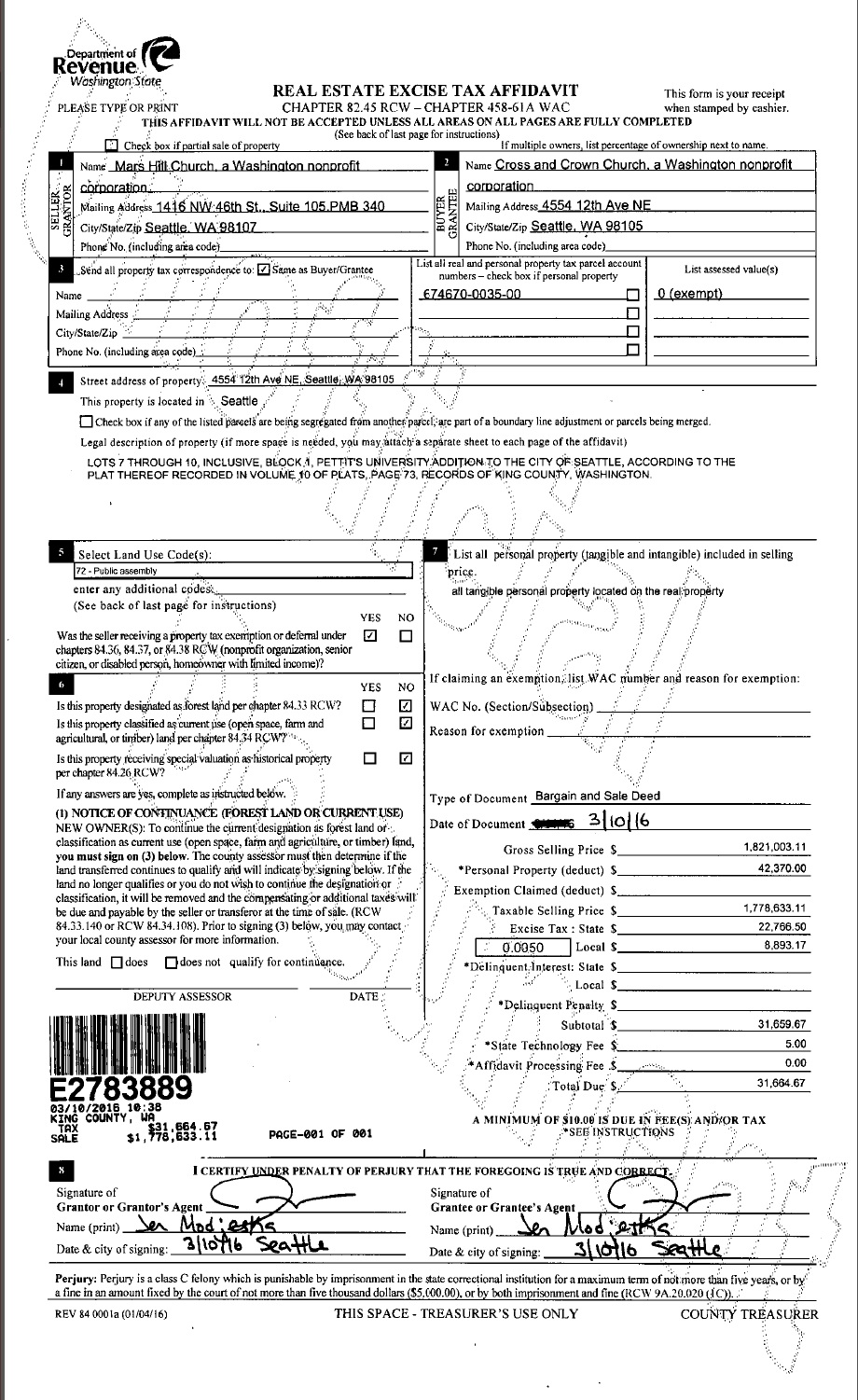 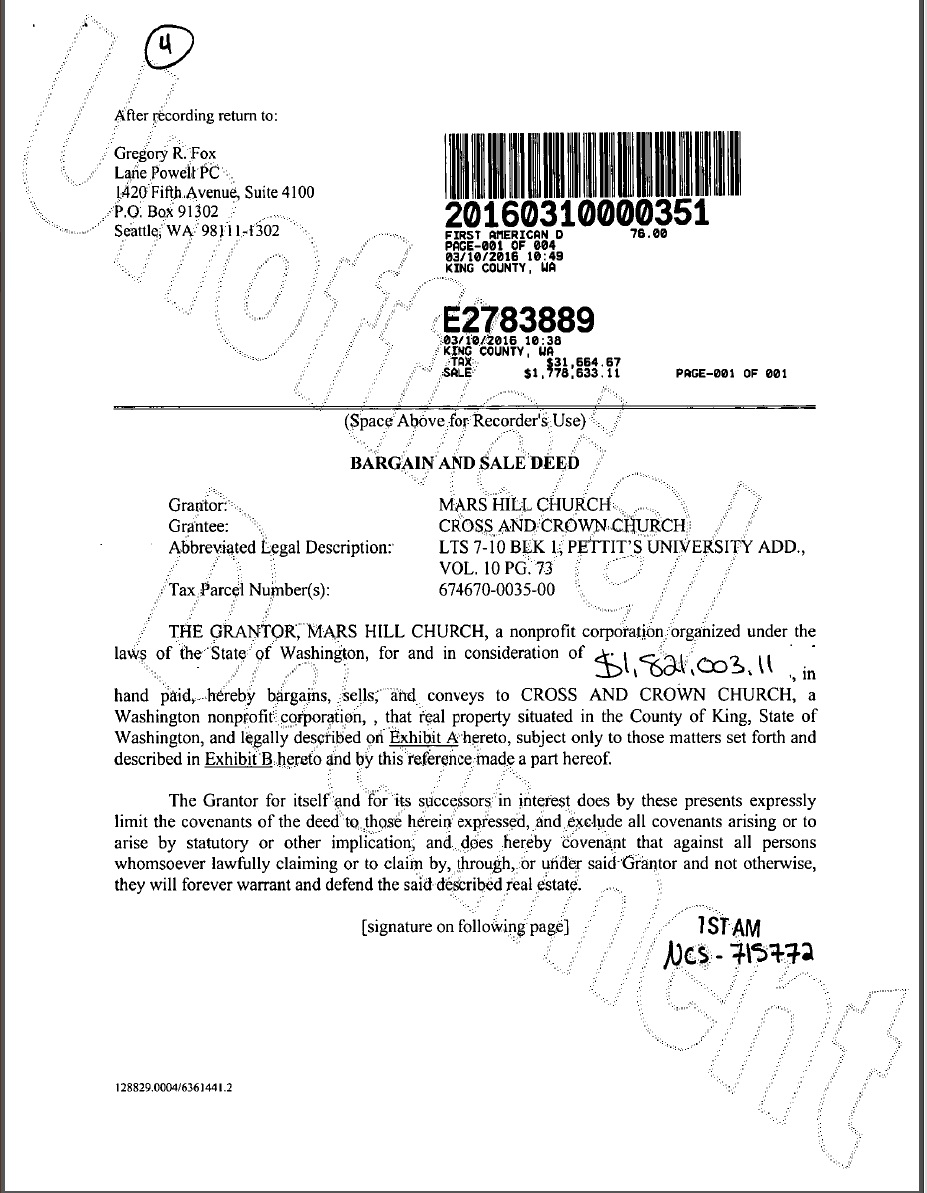 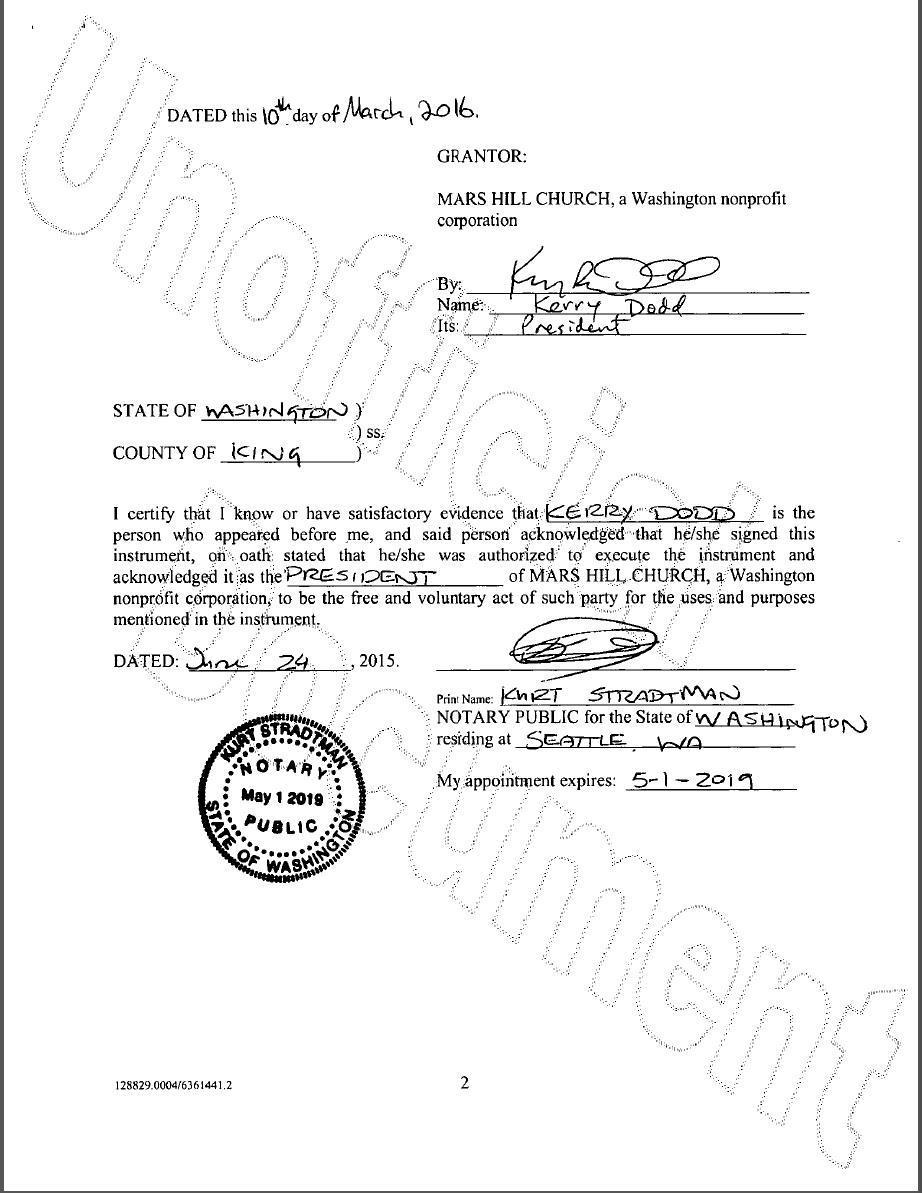 We noted not too long ago that Mars Hill Church is not yet listed as "Inactive" as a corporation and that this suggested the possibility that some transactions needed to be complete before the corporation could finally and truly dissolve.  The era of Mars Hill is not quite officially over yet, but it could be soon if there are no further real estate or other kinds of transactions to be dealt with.

Meanwhile, the Mars Hill Foundation for Planting Churches is still active:
http://www.sos.wa.gov/corps/search_detail.aspx?ubi=603349072
at least through the end of October 2016.  This might take some time.

Where the roughly nine million bucks from the sale of the former Ballard campus to Quest has ended up is as yet unknown.

So even though a whole lot of people in the press or on blogs have acted as if the era of Mars Hill has somehow become "over" because Mark Driscoll quit, that's hardly the case in corporate or transactional terms.  It might be over soon, though, but it remains to be seen.  After all, plenty of people figured things were "over" already by now and yet there couldn't have been a sale of real estate by Mars Hill Church to Cross & Crown if there was no such thing as a Mars Hill Church by March 10, 2016.

For those who haven't checked recently, the new expiration date for Mars Hill Church is now ...


asdf
Posted by Wenatchee the Hatchet at 7:33 PM

what does Kerry Dodd (or any other remaining MHC staff) get out of this?

Does he get a salary for closing down shop? did he just draw the short straw?

not sure, really. But if the expiration date has been bumped out to the end of THIS calendar year there might still be a few more transactions to finish and it may be way too sooon for people on podcasts or articles to speak of the era of Mars Hill Church as if it were really formally over just yet.