Real Marriage, the book by Mark and Grace Driscoll, has been a topic for blogging before here at Wenatchee The Hatchet, here, specifically.  In the interest of promoting education and discussion of the two books mentioned in the earlier post here are back to back comparisons of short excerpts from Dan Allender's book and Mark and Grace Driscoll's book.  It is worth repeating that at no point in Grace Driscoll's chapter "Grace and Disgrace" is Allender's name mentioned, nor is his work mentioned in any endnotes, footnotes, or bibliography.
That Grace Driscoll publicly listed Dan Allender as one of her favorite authors in her deacon profile in the earlier days of Mars Hill is easily documented. 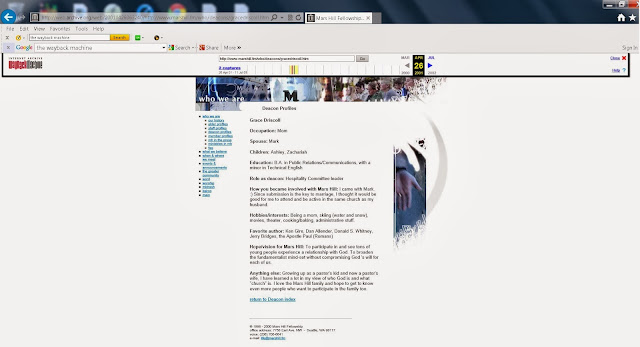 Posted by Wenatchee the Hatchet at 8:44 PM

I guess the bright side is that Grace has internalized the good bits from Allender's book and made it available to others who might not otherwise have access due to it's sudden disappearance at Mars Hill.

It's too bad she couldn't or wouldn't, be true to where the info came from.

One wonders if she wanted to give credit but was prevented or if she just didn't see the importance. Or perhaps something else was going on that I simply couldn't imagine since I've never been a victim of the Mark Driscoll Bubble Life. I couldn't imagine what it's like living that close and being subject to a man like that.

Whatever the reasons, it's still wrong to use someone's stuff like it's your own and I'm glad you are pointing it out.

Authors are supposed to give credit where credit is due. Even when I rework an idea, I footnote it, giving credit to the originator of the idea.

A lot of Allender's stuff is really good.

Pop evangelical books are absolutely notorious for having no footnotes and no attribution. I don't know how this precedent got started, but it's total crap.

I remember reading Wild at Heart a few years ago when it was popular. Then a couple years later I read Robert Bly's "Iron John". In hindsight now, there is no possible way Eldridge didn't rip off huge chunks of Iron John and Christianize them, which I think would actually be just fine if he were to acknowledge it. But nope. Not a word. It's terribly obvious if you read them back to back though.

Driscoll and company is just following in a long and well-established ethos in the Christian pop publishing business. Who knows, maybe she even tried to footnote it but the editors axed it. If the target audience isn't academia, then it has to seemingly stand up in a vacuum. It's part of the style.

Isn't this the sort of thing that brings up Suspicion of Plagarism?

But then, Christian Inspirational types plagiarize from each other like the Three Stooges -- Larry plagiarizes Moe, Moe plagiarizes Curly, Curly plagiarizes Larry, Nyuk Nyuk Nyuk. I think there are even websites you can swipe sermons from, just like term papers.

Or in the words of the prophet Tom Lehrer...

Is this really the definition of"plagiarism"?

It doesn't seem so in a literal sense.