Real Marriage in January 2012 and William Wallace II's "Using Your Penis" from January 2001--on the matter of what Driscoll has insisted certain words in the biblical languages have to mean, specifically "penis" and "vagina" 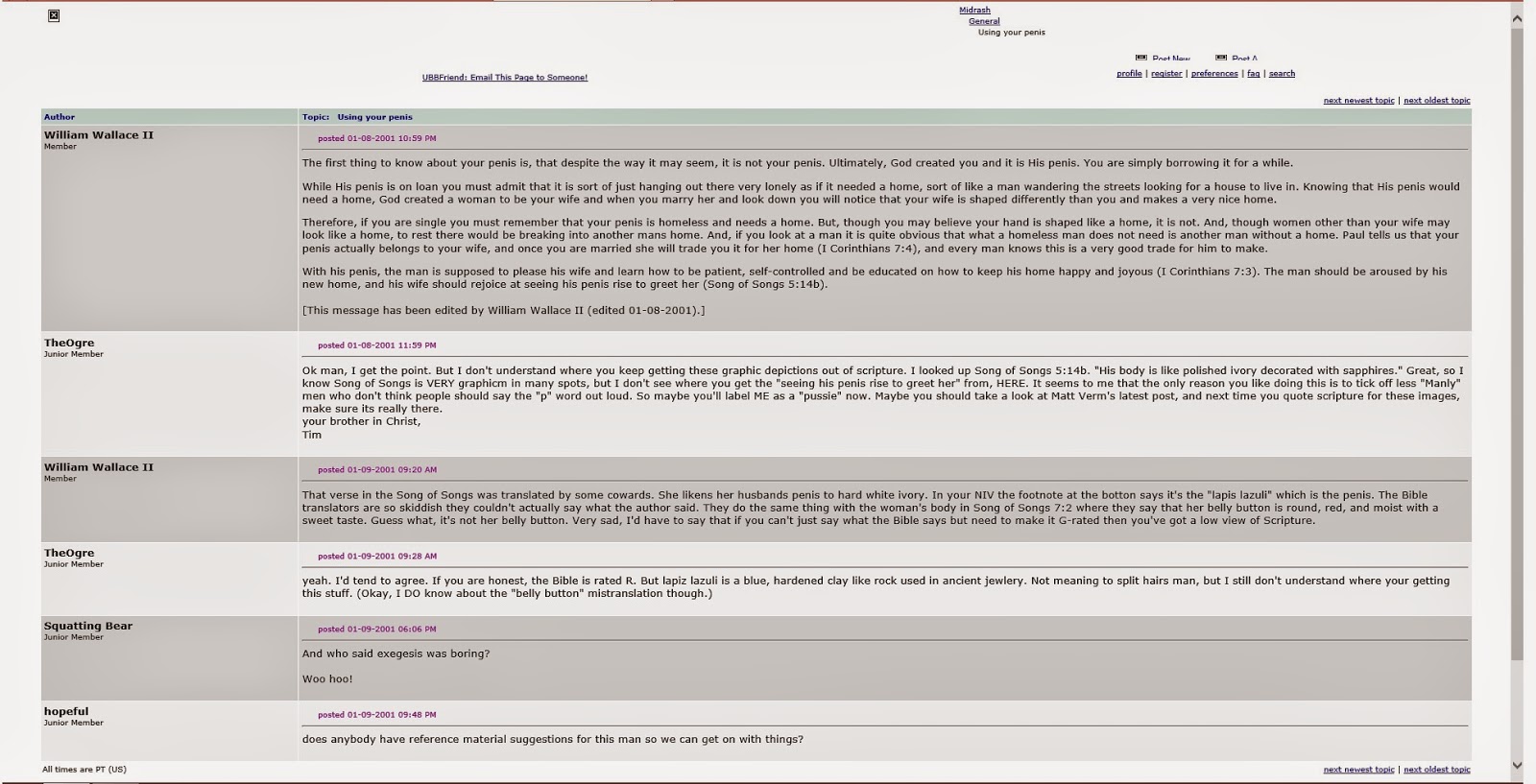 
Note that as William Wallace II Mark Driscoll declared that "lapis lazuli" was a reference to the penis. For the King James crowd:

His hands are as gold rings set with the beryl: his belly is as bright ivory overlaid with sapphires.

"Saphhires" is pretty common and if Driscoll circa 2001 insisted that lapis lazuli had to be the penis what's with so many translations rendering things with "sapphires"?  As in plural?  Why would translators keep translating the word(s) that Driscoll insists must refer to the "penis" not as not-penis but as a plurality of something else?

Driscoll does at least refer to the lapis lazuli part, but insisting that the words must refer to the penis introduce a new problem once we've established that Driscoll takes as given this particular gemstone.  Poetic expression always tends to be metaphorical and imprecise ... but  to say that "lapis lazuli" has to refer to the penis means invoking a gemstone with a legendary blue color.  That introduces, for Driscoll's reading, the potential problems both of reducing a plurality to a singularity and to that singularity being ... blue.  Why is that member so thoroughly blue? Bummer for that guy, right?

As to the detail about which Driscoll insists that the navel cannot be the navel but must be the vulva, there's this problem. In his fine commentary on the book of Judges, Barry Webb discusses Judges 9:37 and its unusual Hebrew phrase often rendered "the center of the land".  The Hebrew expression appears only in Judges 9:37 and Ezekiel 38:12. Webb notes that while the LXX and Vulgate rendered the phrase as "the navel of the land" the formulation would be unpersuasive because the Hebrew word for "navel" (cf Ezekiel 16:4, Song of Songs 7:3[2], and Proverbs 3:8) is simply not the same word in the obscure phrase.

If you want further confirmation of this rendering from Bruce Waltke, see pages 237 and 246 in this book.
http://www.wtsbooks.com/book-of-proverbs-bruce-waltke-9780802825452

Remember, folks, this is a passage Proverbs in which a father addresses a son and the Hebrew word is the one that appears in Song of Songs 7:3, which Driscoll has insisted has to mean "vagina" and not "navel".

As for Ezekiel 16:4, let's stick with the King James

And as for thy nativity, in the day thou wast born thy navel was not cut, neither wast thou washed in water to supple thee; thou wast not salted at all, nor swaddled at all.

The "navel" was not cut? There's no doubt in any variation of this passage that we're reading about a poetic description of Israel in infancy, a baby whose umbilical cord had not yet been cut.

Which brings us back to ..

Song of Solomon 7:2
Thy navel is like a round goblet, which wanteth not liquor: thy belly is like an heap of wheat set about with lilies

In Real Marriage Driscoll makes a point of saying that this must be the vulva/vagina.  On this particular point William Wallace II in 2001 and Mark Driscoll in 2012 have not budged.

pages 171-172
... Sadly it seems those who translated this verse from the original poetic Hebrew into English were more timid than God, choosing the word navel. ... the part of the girl's body mentioned here is therefore more likely to be the vagina or the vulva than the navel. ...

While Driscoll can invoke Dillow and Longman III these are not the only scholars who could field the Hebrew word.  Even Longman III, as cited by Driscoll, suggested that the "navel" could be an allusion to the vulva but not necessarily a literal statement given the Hebrew in the text of Song of Songs 7. Yes this is poetry, but when the Hebrew word that Driscoll and those he invokes insist on "vulva" there is still the problem of Proverbs 3:8, in which a son is advised that heeding wise counsel will be strength to his "navel".  The gymnastics Driscoll has had to go through to insist on a particular anatomical reading of a poetic expression seems to run aground not just on failing to read poetry as poetry but also failing to consider that the Hebrew word he wants so badly to refer to "vulva" is obviously referring to the navel in the other two passages in which this Hebrew word occurs he has to impose his particular meaning on to the text.

And this would go double for the "wifely striptease" reading, since not all scholars necessarily agree to that.  In an ancient near Eastern society a man seeing a woman's navel would be hot and heavy enough.

So on the matter of Hebrew words and what they 'have" to mean, Driscoll hasn't made any more compelling a case in the last two years than the case (or rather assertion) he was tending to make thirteen years ago.

If Driscoll's going to insist that the Hebrew word translated "navel" has to be "vulva" or "vagina" and this same Hebrew word appears in Ezekiel 16:4 what got cut?  There's no evidence Jews practiced female as well as male circumcision, is there?  And for Proverbs 3:8, the instructions there are from a father to son and the phrase is still literally rendered by Waltke as "to your navel" and he explains that this was a shorthand, a way in which the single part (navel) was symbolic of the entire body.  It might be likened to working on your "core" in physical conditioning, for instance, but the "navel" is what is referenced and the subject of the instruction is a son. Since Driscoll has insisted for more than a decade on the point about the Hebrew word commonly rendered "navel" not being a navel, the Hebrew word Webb notes appears in Proverbs 3:8 would be ... ?  Well, in 2000 William Wallace II was still writing on "Pussified Nation" ... .

Now, to be fair, there may be serious and significant exegetical cases to be made for these positions Driscoll has taken and Driscoll has been more than able to, if he has wished, to defend them on exegetical grounds ever since he got his Masters in Exegetical Theology.  But by 2012 he was content to reference Dillow and Longman III when, in theory, he'd already earned that degree in exegetical theology where he could have demonstrated his own direct competence in the biblical languages to make the case for his respective interpretations of specific texts.  Why didn't he do that?   After so many years of being willing to make mention of his master's in exegetical theology why are so many of the points Driscoll marshalls in defense of his particular views still so second-hand?
Posted by Wenatchee the Hatchet at 10:33 PM

wonderful as bromides about marriage being work always are ... commentary on biblical languages is preferable. :)

particularly the detail about how the Hebrew word usually translated as "navel" ends up referring to a male in Proverbs 3:8 and a female in Song of Songs 7:2 if, as Driscoll keeps insisting, the reference in the second case has to be to the vagina or vulva. If that's what it has to mean an exegetical case showing some competency in the Hebrew would be nice, and an explanation as to how the belly button is just a belly button in Proverbs 3:8.

... unless Driscoll would aver that the recipient of the book of Proverbs was a "pussified male" ... .