Turner's account of how he signed the Result Source contract despite dissent and how, later, a split emerged in the BoAA as to whether to blame him alone for it and Global

http://investyourgifts.com/resultsource1/
Posted by Sutton Turner on April 20, 2015
...
In July 2011, a new marketing proposal was already in the works at Mars Hill: ResultSource. I learned of the project from the manager who was overseeing it. ResultSource was a marketing practice that purchased books through small individual bookstores that would qualify the book for the New York Times Best Seller List. Then, these books would be shipped to Mars Hill and sold in our nine church bookstores. It was proposed that being listed on the New York Times Best Seller List would increase the awareness of the church, support the upcoming sermon series, and increase church size.

I had a couple of meetings with the manager who was working on this project and at the time he stated his concern with the marketing proposal. I was not invited to any meetings to discuss ResultSource in my role as General Manager overseeing finance. However, I wrote several memos to my supervisor sharing my concern and lack of support for this marketing practice. I was relatively new to the staff and obviously not on the Board of Directors, nor was I asked to be a part of this particular decision. But due to my adamant disagreement and desire to best serve the staff and church, I wrote a memo on August 26, 2011 to my supervisor saying the following:

A week later, I was notified that my advice was not taken and the plan to use ResultSource was approved. I don’t know who approved the plan. I don’t know what process was conducted concerning the decision. I do know that it showed that the process of making big decisions was broken and it needed to be fixed.
...
Shortly after the decision to execute the ResultSource marketing plan was made, my supervisor resigned. After him, I was the highest-ranking employee in administration. The decision had been made but the contract hadn’t yet been signed. On October 13, 2011, I signed the ResultSource contract as General Manager a full month before being installed as an Executive Elder. After signing the contract, I emailed an elder, stating my frustration with having to be the one to sign the contract when I had voiced my disagreement with it. But few in the organization (or in the media since then) knew of my disagreement. When you stay in an organization and you do not agree with a decision, you have to own that decision as your own. Unfortunately, I will always be linked to ResultSource since my name was on the contract even though I thought it was a bad idea. If given the same opportunity again, I would not sign the ResultSource contract, but honestly, my missing signature would not have stopped it. Someone else would have signed it anyway since the decision had already been made.

To date Turner has not explained why he had to be the one to sign the contract.  He would not have been the highest ranking officer ... although in the wake of Munson's resignation he could have been the highest ranking employee in the organization. But under Munson's bylaws (or Driscoll's, we've discussed the ambiguity of whose creation the 2007 bylaws ultimately was over here earlier this week) if Munson resigned as president the vice president was the preaching pastor, Mark Driscoll.

Still, there's a sense in which we should remember that Turner describes himself as willing to comply with policies he disagreed with.  So in a sense while his name will always be attached to the Result Source Contract we should move forward a bit.

http://investyourgifts.com/learning-growing-communicating-under-criticism/
Posted by Sutton Turner on April 24, 2015
...
When the criticism of Mars Hill Global began in the Spring of 2014, I wanted to communicate about what happened with Global, its history, the financials, and my mistakes. Unfortunately, I was not permitted to discuss these things just as I was not permitted to discuss the ResultSource situation in the detail that I felt it deserved. There was actually a division on the Board of Advisors and Accountability (BOAA) as some men wanted to put all the blame for both Global and ResultSource on me, but I am thankful for men who did not allow that. [emphasis added]

After the first blogs were published, many people asked me, “Are you stabbing Pastor Mark, Pastor Dave, Mars Hill and … in the back?”

Since leaving Mars Hill in September, I have been in frequent contact with Pastor Dave Bruskas, Matt Rogers, and other pastors with whom I directly served, board members with whom I served, and many other top leaders with whom I have served shoulder-to-shoulder while at Mars Hill. Many of these men remained at Mars Hill after my resignation and some still faithfully remain at Mars Hill selling assets and closing the organization. Our ongoing contact has been as friends, not in any managerial or oversight context with regards to Mars Hill—I’m thankful that Jesus has allowed our friendships to extend leaps and bounds beyond that. We are family in Christ.

Conspicuous for the moment by absence is mention of Mark Driscoll. Whether this omission indicates anything is impossible to say but toward the end of giving Turner at least some benefit of a doubt let's observe the following--in a way what matters is not so much that Turner signed the contract (though, of course, that matters), what matters is who was invoiced for that contract?

Courtesy of Warren Throckmorton, we have access to those invoices:
http://www.patheos.com/blogs/warrenthrockmorton/2014/05/27/who-at-mars-hill-church-authorized-church-funds-to-buy-a-place-for-mark-driscolls-real-marriage-on-the-nyt-best-seller-list/ 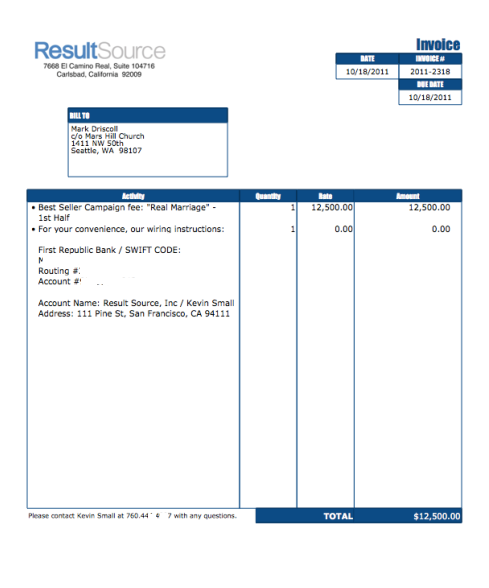 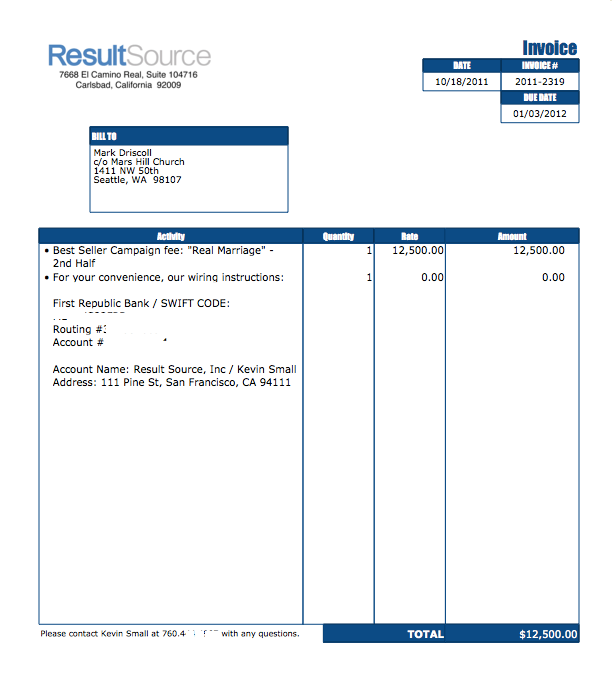 By Turner's account there was a party or a group within the Mars Hill Board of Advisors and Accountability that was willing and supportive of the idea of letting Sutton Turner alone be the fall guy for controversy surrounding Result Source and Mars Hill Global.  Turner also recounts that this split the BoAA and that some objected to this idea.  Well, thanks to the reporting we've had access to in the last two years there's a very simple reason why we can accept this account as at least plausible.  Mars Hill BoAA members would have known that regardless of whether or not Sutton Turner's name was on that contract, the invoices Result Source sent were to Mark Driscoll.

There might be those who would read skeptically everything Turner has published in the last week.  That's understandable but so far, at least, while Turner's account seems to uncritically accept some "history" of MH governance that has been disproven years ago, Wenatchee The Hatchet's current impression is that Turner may have simply repeated the history of Mars Hill governance ("everybody had to all agree for anything to get done) that was told him when he arrived.  In that case he was told a basically false story he was not in a position to have corrected.  And since between the 2007 post-trial statements and Mark Driscoll's "Stepping Up" video we can't be quite sure if Jamie Munson wrote the bylaws or Mark Driscoll wrote the bylaws that were approved in 2007, Sutton Turner's story has at least remained consistent on the essential details.

What's more, Turner's account also squares with documents leaked from Mars Hill to Warren Throckmorton.  Now if people dispute the accuracy of what Turner has said they should set the record straight.  At the moment it seems as though Turner's recent account of a split in the BoAA in which some part of the group wanted to scapegoat him seems to reinforce the validity of Paul Tripp's statement that the BoAA was incapable of providing the kind of accountability it was designed to do. How would a BoAA split on the issue of whether or not to make the guy who signed a contract on behalf of Mars Hill to rig a #1 spot on the NYT bestseller list for Mark Driscoll a scapegoat be able to hold Mars Hill leadership accountable?  As Paul Tripp stated last year about the BoAA, the most such a board could do was ensure financially restrained decisions, it could not meaningfully provide any other accountability.

Turner's account says "some men", meaning Turner's understanding was there was more than one man on the Mars Hill Board of Advisors and Accountability who wanted to basically scapegoat him over Result Source.  That's quite a claim.  We can work out from the invoices of Result Source being sent to Mark Driscoll that those who opposed the scapegoat gambit could have done so on the basis of the fact that while Sutton Turner signed the RSI contract as a Mars Hill employee it was done to promote one of Mark Driscoll's books and Mark Driscoll had become the legal president of the organization.

As we've discussed at some length earlier this week, when the plagiarism scandal erupted and Janet Mefferd presented evidence that the Trial study guide infringed on a copyright the initial Mars Hill public response was to spread the blame on to a team of research assistants for an introductory essay that only had Mark Driscoll's name on it.  Which is to say, as scapegoating the employed help goes, there seems to be some precedent for this having been done before in the face of controversy.  Turner's story may yet get rebutted from elsewhere but for the moment what Turner has shared seems plausible (if incomplete) and would even fit what has demonstrably happened in the past when Mars Hill has reacted to public controversy.

If anyone previously or currently associated with the Mars Hill Board of Advisors and Accountability wants to clarify or correct any of the statements Sutton Turner has lately made now might be a good time.

Posted by Wenatchee the Hatchet at 10:12 AM