the end of Mars Hill's Ballard corporate headquarters, acquired formally 12-2005, deed in lieu of foreclosure and contract forfeiture in Dec 2015

For those who have kept tabs on real estate transactions to do with Mars Hill there's been a few sales from the 2015 period.  But conspicuous by absence of a closed formal sale was the Mars Hill headquarters.

The sale of the actual Mars Hill Ballard campus in Ballard has been established.  Being in Seattle, WtH heard word of that before it was possible to really confirm it in a documentary way. 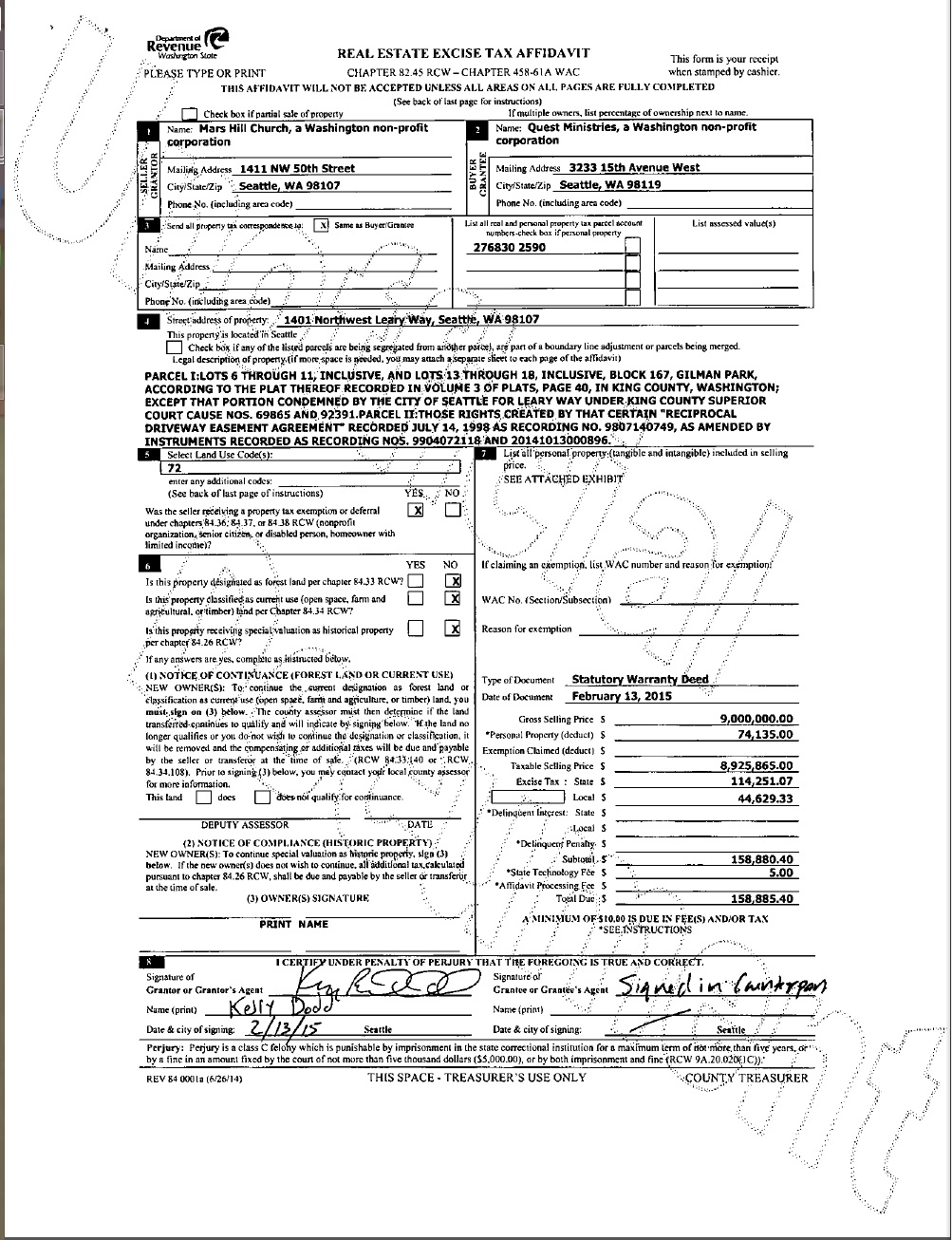 But the headquarters lot itself ...

it looks like it was kind of given away.  Back in December 2015. 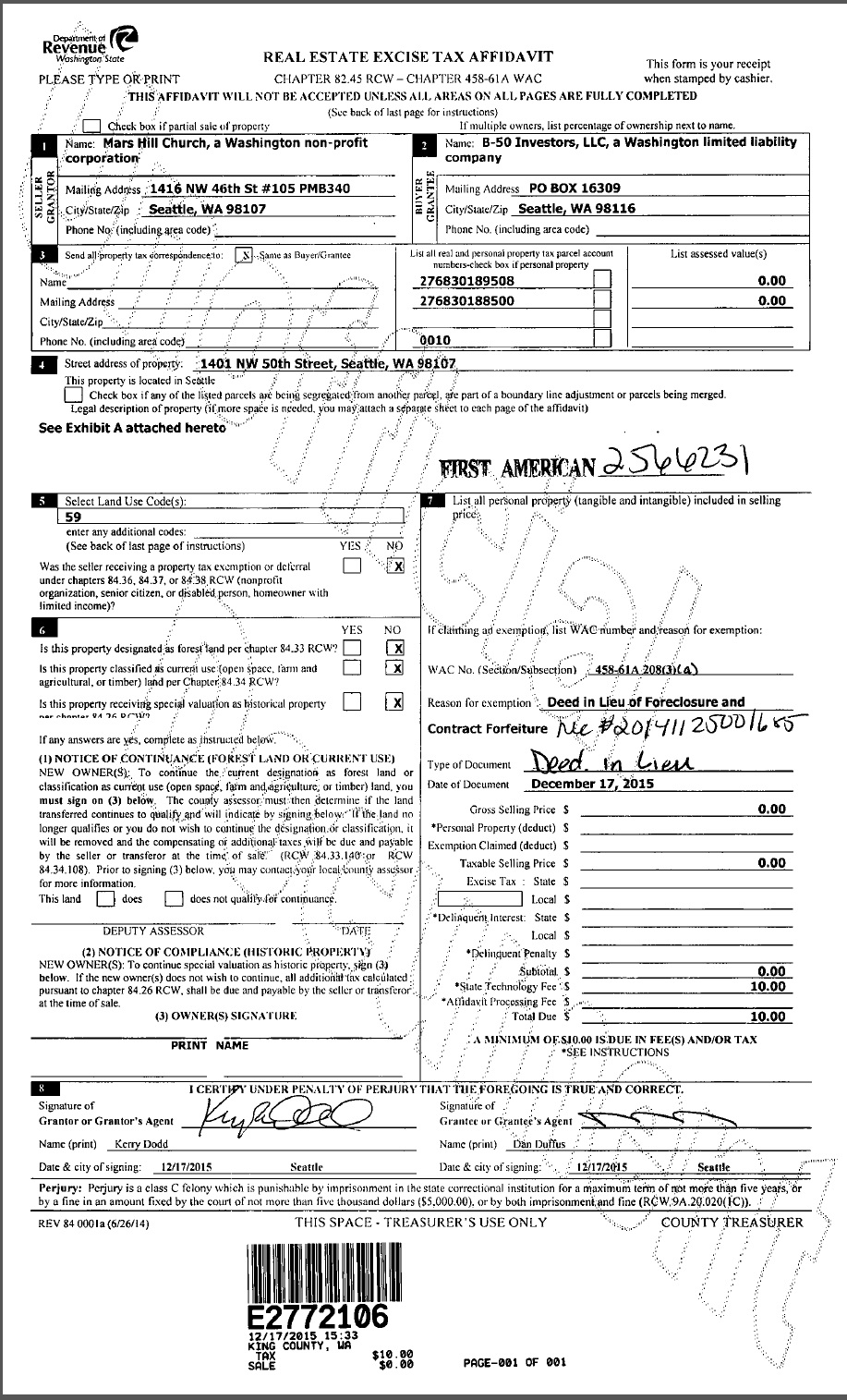 For people who never attended Mars Hill or only attended since about 2008 it might be impossible to convey the significance of the Mars Hill real estate that became its corporate headquarters.  Ten years ago Driscoll announced a bold plan for it.

Our current facility cannot accommodate much growth beyond our current four Sunday services. Additionally our kids' ministry is bursting at the seams, our Capstone classes are in desperate need of space, and our cramped, windowless office space would be perfect if we were a third-world sweatshop.

So the elders voted to purchase a 43,000-square-foot dumpy warehouse Jamie found one block away from our current building. When the project is completed, we will have two buildings only a block apart, each hosting church services, with 1,300 seats in one location and a projected 1,000 seats in the other. We will be able to grow to more than 10,000 people per Sunday through multiple services in multiple locations. Each service will have live worship teams, but I will only be live in some services and in video in others.

The remarkable thing is mere months after Confessions of a Reformission Rev was published ... we can observe a lengthy statement Mark Driscoll made in a sermon in the 1 Corinthians sermon series that "might" not make it into the re:vival of its web presence at Mark Driscoll Ministries.

in his July 30, 2006 sermon in 1 Corinthians Driscoll said several things about the property mentioned in Reformission Rev:

http://marshill.com/media/1st-corinthians/spiritual-gifts-part-ii#transcript
Part 26: One Body, Many parts

1 Corinthians 12:12-26
Pastor Mark Driscoll
July 30, 2006
There is the building a block away. We purchased it a year ago. It was heading into foreclosure. We purchased it for under market value. It has increased in value since that time, and this is just some interior and exterior shots of the space, and our plan was to turn that into a large room to see maybe 800 to 1,000 people. And so, what we have instead decided to do, first, we’re going to keep that building – and it’s been great – ‘cause according to King 5 television, they had a report that said that 98105, which is this zip code, is one of the five fastest, increasing valued zip codes in the State of Washington. Since we bought that building, as it was going to foreclosure, we already have gained a million dollars in equity in that building. We have no intention of getting rid of it, but here’s what we do want to do with it. We want to knock half the building down and just turn it into parking to increase our parking capacity. Secondly, the other half of the building – we don’t feel that we have to use right now because of some other things that have come available that we’re gonna tell you about – but we’re gonna keep it. We’ll rent it out with the hopes that a tenant will pay most of our mortgage. We can keep it then, and then if we ever do wanna build on it, we can develop it and do whatever we want with it but we feel it’s important right now to watch and see what happens with this neighborhood, particularly what happens to parking, and then make a determination down the road as to best use.
And the reason that we don’t need to develop it as we had thought is because of some other things have come available. Among those is Shoreline and these are some shots from the Shoreline campus and where we are meeting at Christa Ministries, at [Schirmer] Auditorium. Four hundred seats, plus a full daycare. It’s amazing kid space. Huge gym for the kids to run around in. Lots of parking. They’re letting us use that on Sunday and now this fall for beginning, for midweek programming for nothing. It’s free. We don’t even pay for janitorial, we don’t even pay for utilities. It is a savings of over $100,000.00 a year. We can be there for two more years. It’s a savings of 200 plus thousand dollars. We love Christa. We’re very, very grateful for their kindness to us. Eventually, we will need to purchase a permanent site for our Shoreline. We’ll need to get them a permanent purchase campus, ‘cause we can only be there for two years. I mean, wouldn’t it be great if somebody let you how the house for two years for free? I mean that’s a very kind gift, so we are actively looking for another place to buy….


By 2007 ... it started to look as though one of the problems was not just "when" but even "if" the real estate that became Mars Hill headquarters could EVER become what was promoted in Mark Driscoll's 2006 book.  The subject came up again amidst concerns about other controversies like by-laws revisions and pastor terminations in 2007, and was addressed by Jamie Munson (who, as Mark Driscoll recounted it, was the one who scouted out the real estate in the first place).

Answers submitted by Pastor Jamie Munson
Q: What is the status and future plans for the property M.H. owns just north of the Ballard campus?
...
A:
We purchased the building on 50th with the intention of performing a massive renovation, and by connecting it with our Leary building, to create a large campus in the middle of the city. Since the 50th building dedication, our renovation plans were delayed by our attempt to obtain a change of use permit. [emphasis added] During the permitting delay we were gifted a building in West Seattle and undertook renovating and opening that building as our next campus. At the time of these changes we communicated this to the members of the church openly and honestly as we wanted to be faithful to the stewardship and generosity of the body. Also, each quarter a letter is sent to members, along with their donor statement, urging faithful stewardship and giving updates to vision and building strategies. In addition, Pastor Mark wrote a lengthy letter that was sent to members electronically, and handed out at all campuses explaining the shift to a multi-campus church before the West Seattle campus opened.  Due to the restrictions and expense of building a single large building in our city our focus has shifted from one large campus to becoming a multi-site church of smaller campuses.  Your elders feel this will enable a more effective and cost-efficient spread of the Gospel throughout Seattle and beyond.  It will still take capital campaigns and the purchasing of facilities but allows us to spread and grow more quickly as Jesus leads. [emphasis added]

We are leasing part of the 50th building to generate some revenue. We are also performing a minor renovation of portions of the building to alleviate our current office and production space needs.  This will eliminate the need for leasing office space for our use.  In addition the property provides some much needed parking relief for our Ballard campus and also needs such as storage.  An average church of our size functions with about 4 times as much square footage as we do with our Ballard campus.  Storage, meeting rooms, office space and parking are greatly needed and this property serves those with purposes in the mean time. Future development options are being considered as well but there are no firm plans for these.  This is further complicated as the city is considering further zoning changes and restrictions in industrial areas of the city.  Until this legislation is decided it hangs property owners up as the future possibilities of the property are unclear.  We are hanging on to the property and using it to the fullest extent possible in the mean time. [emphasis added]

And then ... well ... the rest is history ... just not the history of ever getting those renovations done, apparently.

Of course had the leadership of Mars Hill gone straight for multi-site because they thought of that first perhaps they'd have never bought the lot to begin with.  As famous as Mars Hill became for being a multi-site church a detailed history of its real estate development and publicly accessible statements made by its leadership over the years suggests the possibility that multi-site was essentially a pragmatic plan B.

And as of 2016 it turns out, based on King County records, that what the dissolving Mars Hill leadership ended up doing was giving the real estate away.

Considering the grand vision Mark Driscoll cast for the real estate a decade ago in Confessions of a Reformission Rev it seems impossible to not consider the fate of that real estate. Anyone want to contribute a (moderated) comment about how a deed in lieu of foreclosure and contract forfeiture might work?

For those who might even possibly care what B-50 Investors, LLC is

Posted by Wenatchee the Hatchet at 11:46 PM

Don't have information beyond what's been posted at this point. Perhaps others can find out more.