a blast from the past: Mark & Grace Driscoll Marriage Book Marketing Plans: observations on a mid-2011 document and discussion of integrated marketing approaches

Every once in a while something comes along.  This is not a dated document on the document itself.  From the wording and referenced timelines, however, an inferential case can be made that it was composed some time in the middle of 2011.
Driscoll himself leads early with his degree in Communications from one of the top 5, and he was quick to mention that his wife Grace has a degree in Public Relations.  Then, quickly, he moved to state "we are happy to help craft a marketing strategy with Thomas Nelson and enjoy doing so."
For those who want to read the doc, it can be read after the break.  You might want to collapse all the menus on the right side of the blog before reading further. 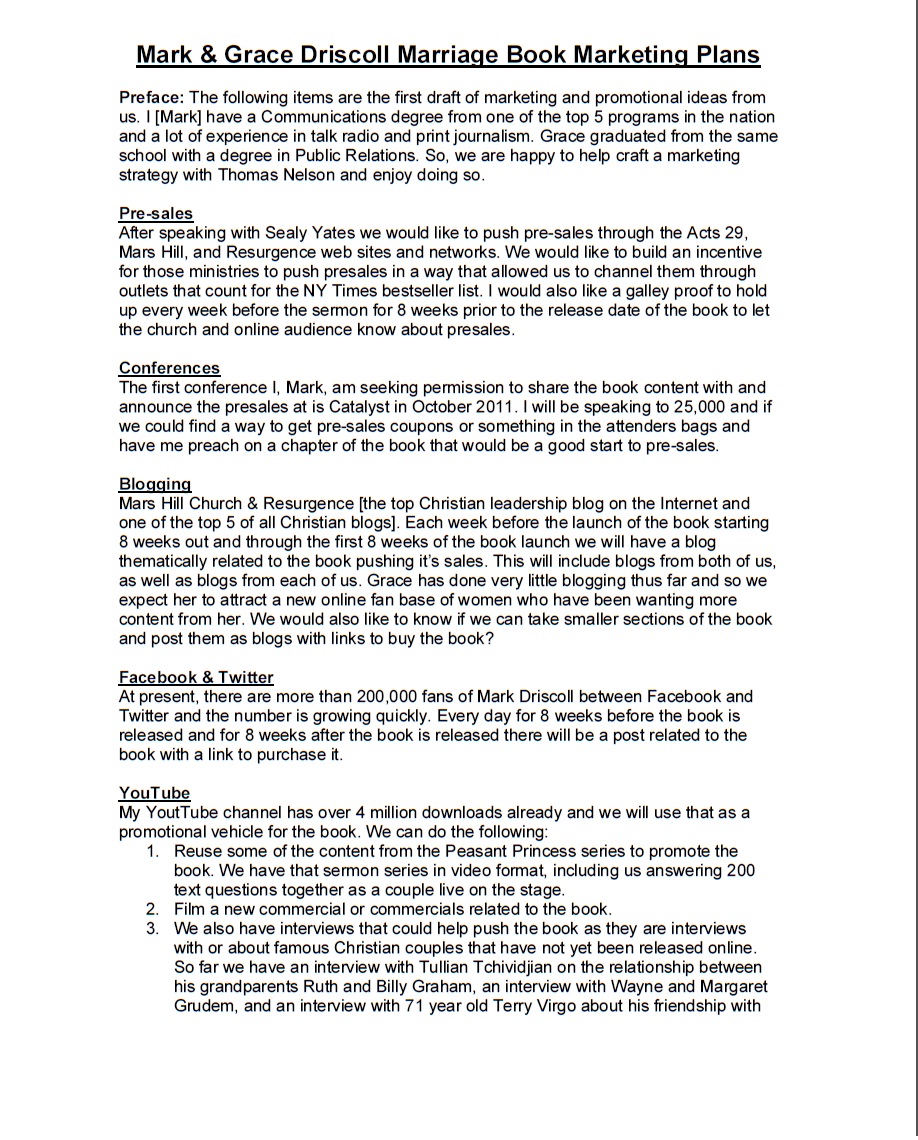 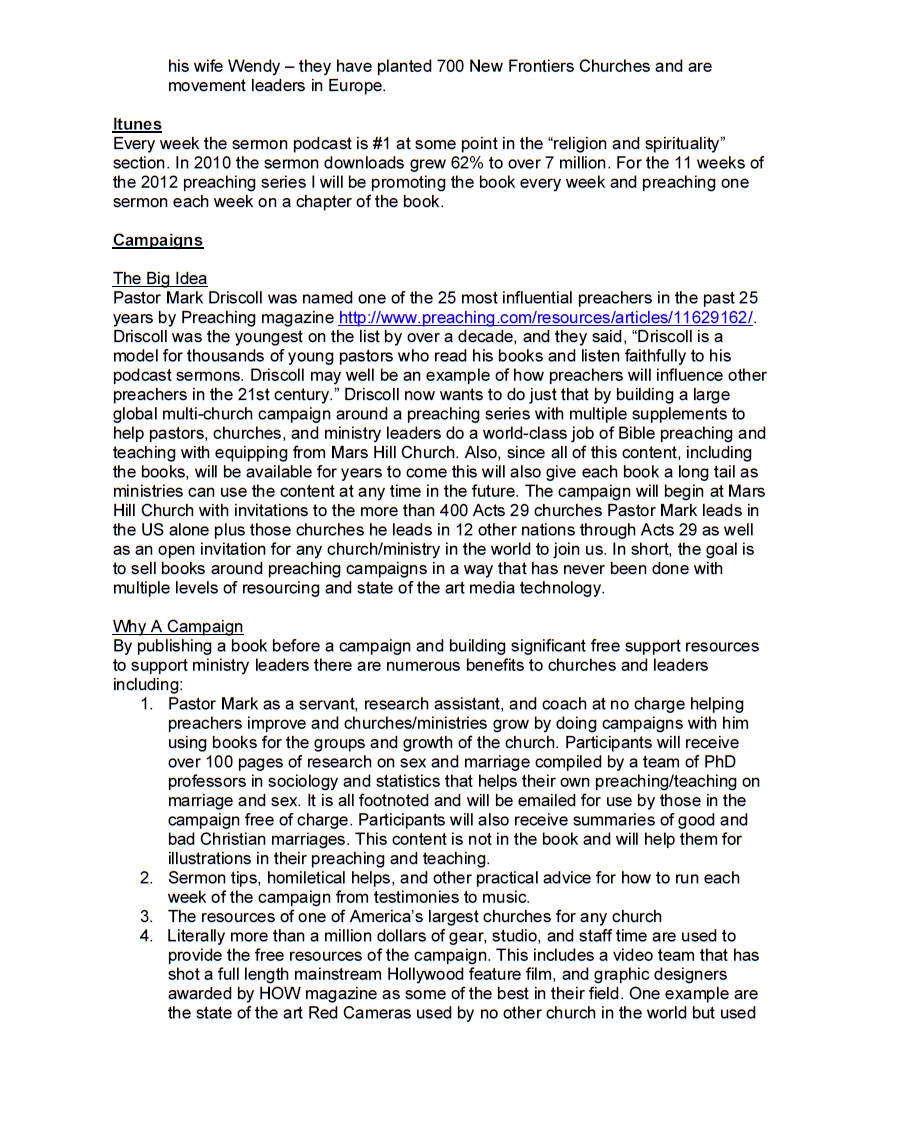 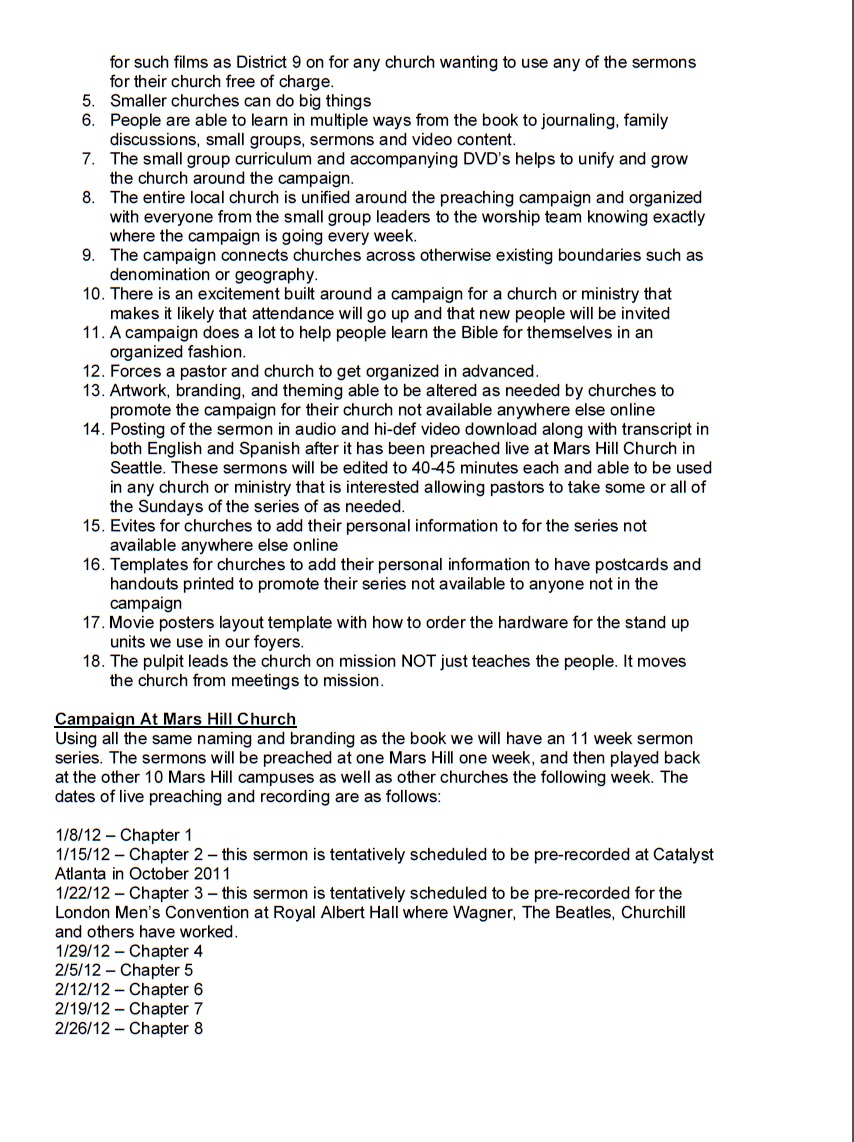 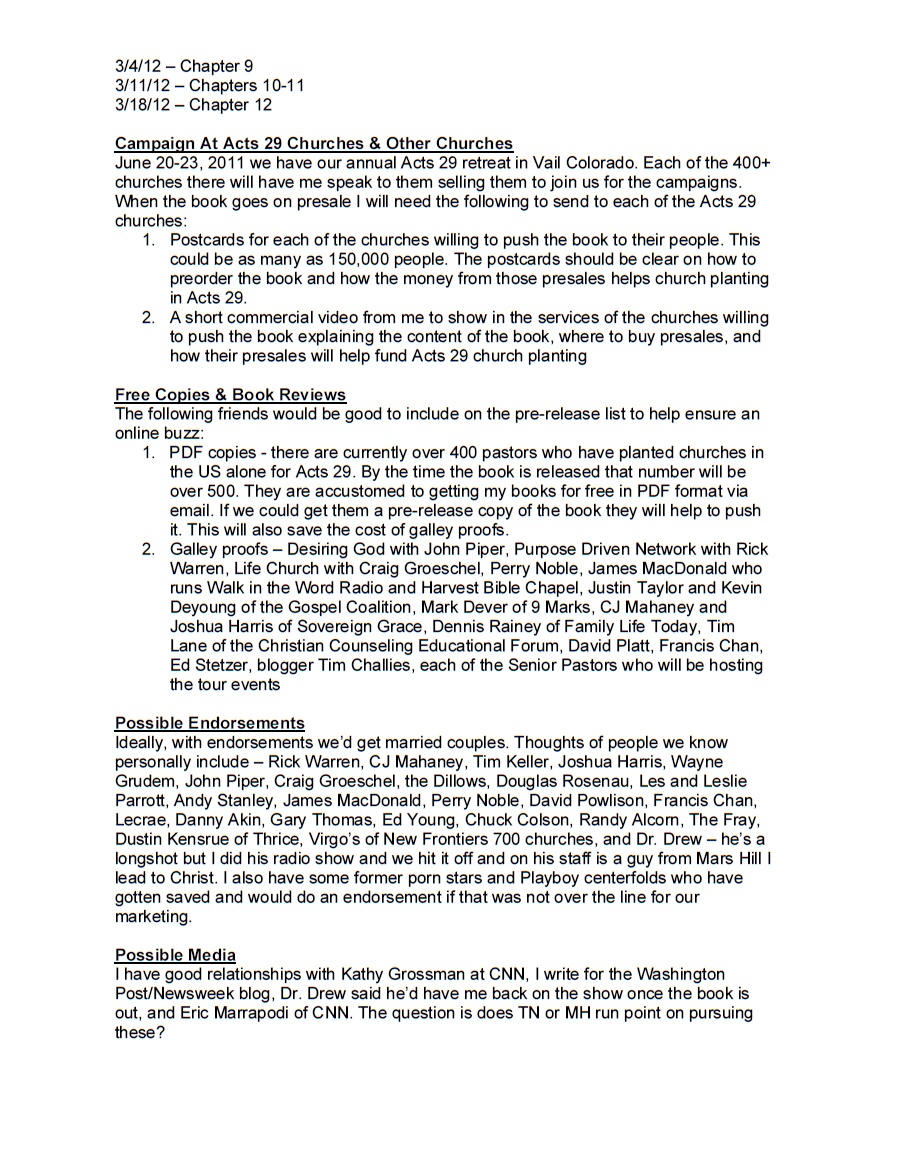 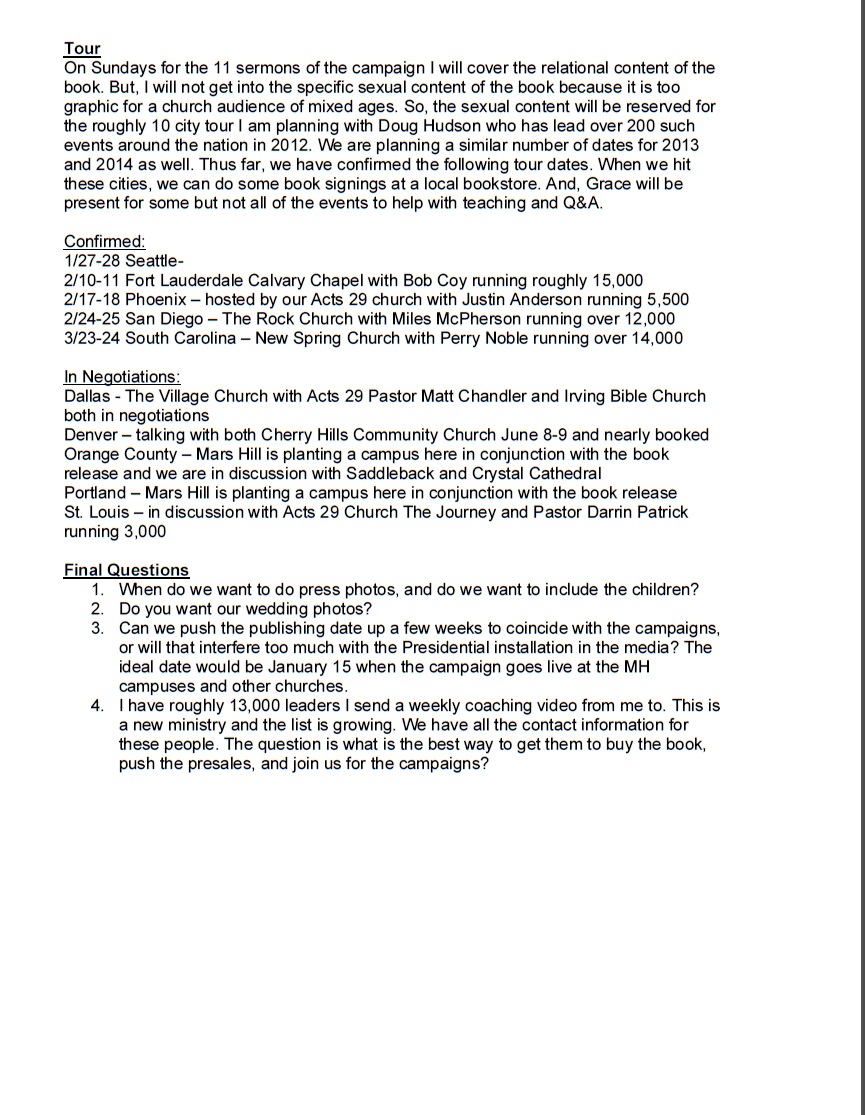 A conversation with Sealy Yates by the Driscolls appears to get referenced.  Subsequent to that conversation, it's mentioned, that the preference was for pre-sales to be channeled through Acts 29, Mars Hill and Resurgence websites and networks.  Building an incentive for those ministries to push pre-sales that could be counted toward the New York Times bestseller list was desired.  This could suggest that by mid-2011 Team Driscoll understood that it was possible and, at the time, desirable to push pre-sales of the book that would be called Real Marriage in avenues and networks that would get counted toward a placement on the New York Times best seller list.  The "we" to keep in mind here is anchored to the preface, where Mark Driscoll describes himself and Grace as interested in helping craft a market strategy with Thomas Nelson.

Striking is the paragraph discussing blogging.  Driscoll was clearly well-known as a blogger.  What's interesting is mention of the idea that Grace Driscoll could/would do more blogging.  "... we expect her to attract a new online fanbase of women who have been wanting new content from her."

In the "YouTube" section it's hard not to spot reference to an interview with Tullian Tchvidjian, an interview proposed as a possible way to promote Real Marriage. Some of you who regularly read Phoenix Preacher may have spotted one Bob Coy in the pages.

But let's get to the big idea ... which slips spectacularly into a vaguely disembodied third-person mode.
...
Driscoll was the youngest on the list by over a decade, and they said, "Driscoll is a model for thousands of young pastors who read his books and listen faithfully to his podcast sermons. Driscoll may well be an example of how preachers will influence other preachers in the 21st century." Driscoll now wants to do just that by building a large global multi-church campaign around a preaching series with multiple supplements to help pastors, churches, and ministry leaders do a world-class job of Bible preaching and teaching with equipping from Mars Hill Church.

If Driscoll in the last year or so has quipped the Bible doesn't have lots of positive things to say about young men there's no sign of that sentiment in this marketing plan.  That Driscoll was more than a decade younger than others on a Preaching list of 25 most influential preachers in the past 25 years seemed to be a matter for boasting and celebration in this marketing plan.

The idea seemed to be that if the hype was Driscoll was going to be "the" person to influence young pastors then the marketing plan was to basically really, really live up to that hype.

The campaign, basically, seems to have been a fully integrated multimedia project in which Real Marriage would be a sermon series, a book, a study guide, a variety of merchandise.  The idea was that the campaign could launch the product and become a resource that smaller churches could make use of and that could be implemented across a big multi-campus church.

Said church turned out to be Mars Hill in the marketing plan. The open of this section quickly confirms what Wenatchee The Hatchet has discussed a few times, how Mars Hill by 2011 had switched into a paradigm where the live sermon Driscoll preached would be live one Sunday and rebroadcast a week later at the other campuses by way of a DVD.  That there were "just" ten other campuses lends some weight to the inferential dating of the document to some time in 2011 before a number of launches occurred.

Then when we get to Campaign At Acts 29 Churches & Other Churches,  we see an anticipation of an event that dated June 20-23, 2011.  This reinforces an impression that Mark and Grace Driscoll had an understanding that by using specific networks and network resources for pre-sales that pre-sales in those networks could count toward the New York Times bestseller list.

"Each of the 400+ churches there will have me speak to them selling them to join us for the campaigns." That's an anticipation that suggests that this document presented above was drafted some time before June 20, 2011 at the latest.

It looks like Driscoll suggested free pdf copies of Real Marriage be sent to Acts 29 pastors to save costs on galley proofs.

So who got mentioned for getting galley proofs?  Desiring God ministries (John Piper); purpose Driven Network (Rick Warren); Life Church (Craig Groeschel); Perry Noble; James Macdonald (who in 2011 was perhaps not yet on the BoAA because the by-laws had not been revamped); Justin Taylor and Kevin Deyoung of the Gospel Coalition; Mark Dever of 9 Marks; CJ Mahaney and Joshua Harris of Sovereign Grace Ministries; Dennis Rainey of Family Life Today; Tim Lane of Christian Counseling Educational Forum; David Platt; Francis Chan; Ed Stetzer; the blogger TIm Challies; and each of the senior pastors who would be hosting the tour events and those were ...

well, let's go back a moment and discuss what a galley proof even is to begin with.

In book publishing a galley proof can be thought of as a proofreading/corrections copy so that any corrections or errors that need to be made can be fixed before fixing the publication into its final published form.

The galley proof might well have been the stage at which altogether omitted footnotes crediting works cited could have been spotted.  Maybe something like a single footnote's reference to the work of Dan Allender and any number of other authors whose work was not sufficiently credited in the first print edition of Real Marriage, perhaps?

Considering that none other than John Piper's Desiring God ministries was explicitly named as a ministry to get a galley proof of Real Marriage perhaps Piper's lament that Mark Driscoll's situation represents a defeat for at least a strand of Reformed theology really has some meat to it.

It's hard to shake an impression from this marketing plan that on the whole it called for the use of the resources, infrastructure and people of Mars Hill, Acts 29, and Resurgence to shill what turned out to be a sloppily assembled book and as we have known since March of 2014, Mars Hill contracted with Result Source to secure a place on the NYT best seller list for Real Marriage. The unified campaign approach ensured that almost any small group was going to be talking about this big idea/big event.  This campaign was also making use of material recycled from the 2008 Peasant Princess series. That looks like one guy and his wife suggesting that every ministry or company he'd played a role in launching or running be unified toward precisely one goal, promoting a marriage book in a way that would cement his role as the youngest of a set of influential pastors who could become the guy that younger aspiring pastors would look up to.

In contrast to the protests that he'd rather be a pastor than a celebrity, it can seem from this marketing proposal that celebrity and pastoral office were seen as organically whole, possibly implicitly central to an intended legacy ... or at least that's how it seems to read to WtH.  Others may have different impressions.  It does not seem so far-fetched to express a reservation about the book and the ways in which it was promoted.  After all, faithful attenders and members of Mars Hill could get the impression that the integrity and reputation and the livelihoods and people of Mars Hill were in some sense tainted and compromised by being used to promote the celebrity of just one guy.

Posted by Wenatchee the Hatchet at 9:48 PM