If Justin Dean had time for the following stuff at I4J ... can he clarify which conversation he believes The Stranger staff made up?

So if Justin Dean can make a point of bringing up this ...
http://www.i4j.org/2015/i4j-live-march-5-learnings-of-a-mars-hill-pr-guy-with-justin-dean/ 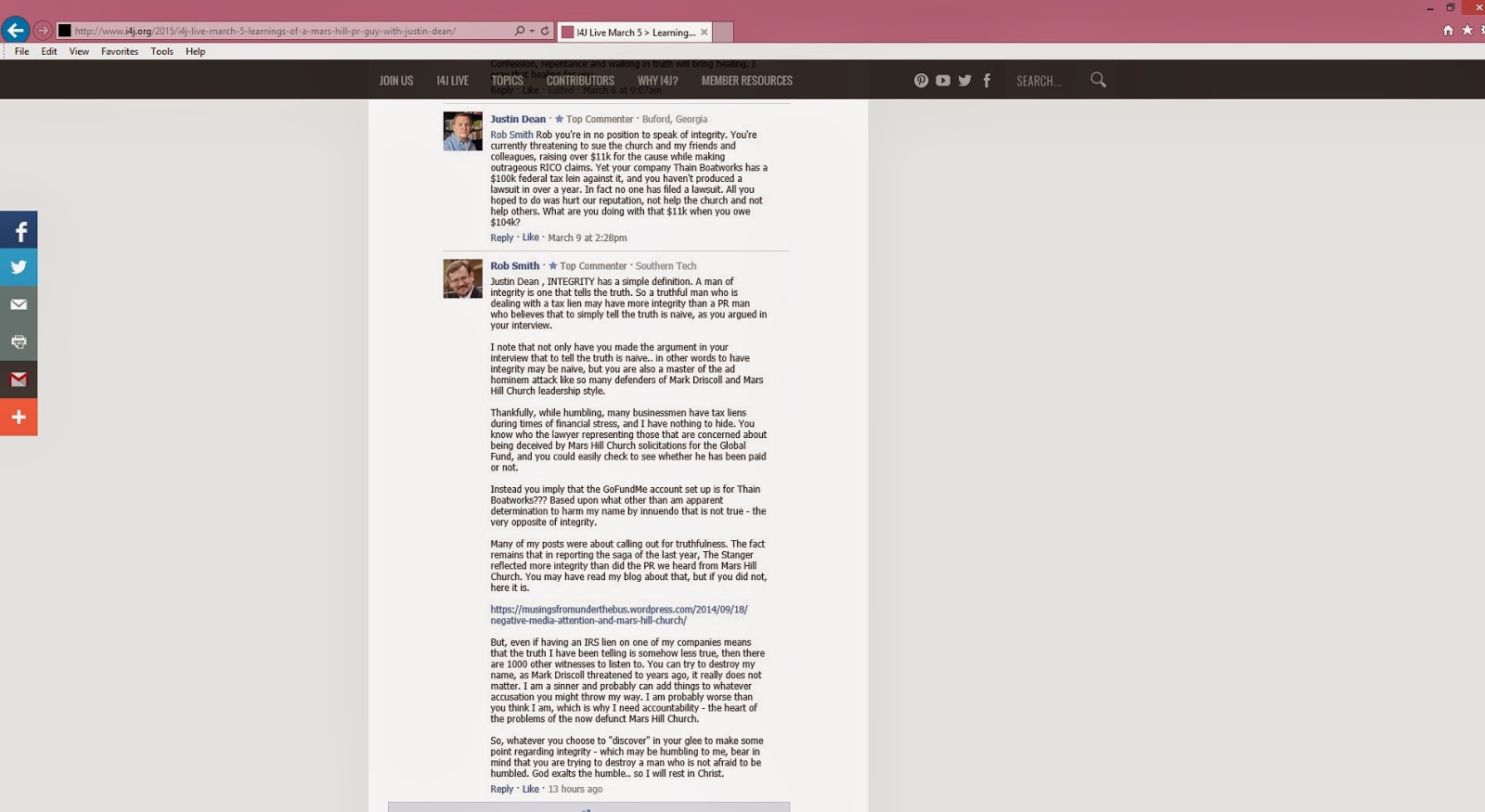 Rob Smith Rob you're in no position to speak of integrity. You're currently threatening to sue the church and my friends and colleagues, raising over $11k for the cause while making outrageous RICO claims. Yet your company Thain Boatworks has a $100k federal tax lein against it, and you haven't produced a lawsuit in over a year. In fact no one has filed a lawsuit. All you hoped to do was hurt our reputation, not help the church and not help others. What are you doing with that $11k when you owe $104k?
Reply · Like · March 9 at 2:28pm

Why can't he be bothered to answer a straightforward question about which conversation he believes The Stranger staff made up in their published materials on Mars Hill?  He's had a couple of weeks to clear things up.  No doubt The Stranger staff recognize they offend and inspire disagreement plenty, but the allegation that The Stranger published a conversation attributed to Justin Dean or anyone at Mars Hill that Dean said was "made up" is a pretty substantial assertion.

The pertinent assertion is

"...  I would respond to bloggers and journalists all the time, trying our best to be open and communicate well. There were periods of time when we'd not respond at all. That was frustrating at times but we were doing our best to try and wade through the storm. The Stranger was just brutal and mean and would twist what I would say so we eventually just ignored them because they were hateful no matter what. They even posted a whole conversation with me once that was completely made up. It never happened. They aren't to be trusted. [emphasis added]"

If Dean asserts this can he establish which article it was, what date it was published, who wrote the article, and what it was about?  If Justin Dean's got time to make comments about something that may never even happen he should surely have time to clarify to either Wenatchee The Hatchet or, better yet, The Stranger which conversation he believes was made up.

It would seem that a journalistic lapse as egregious as making up a conversation would be something Dean could have answered within the last ten days.

After all, if Sutton Turner found the time to come by and clear up some misunderstandings (much appreciated, by the way) then perhaps Justin Dean can follow the same example?

It looks weirdly hardball for Justin Dean in terms of PR.  Wouldn't the time to have played hardball PR been some time before the formal dissolution of the corporation was announced?

As tax liens go, there's probably no fun one, although Stevie Wonder's tax lien made for some amusing headlines
http://www.vibe.com/2013/01/stevie-wonder-tax-lien-seriously-40/

and then there's Willie Nelson
http://www.forbes.com/sites/kellyphillipserb/2013/04/29/willie-nelson-who-saved-his-career-and-his-house-with-the-irs-tapes-turns-80/

Does Justin Dean want to make a case that Stevie Wonder lacks integrity, too?  Not that someone couldn't try to make that case but ...

To date there's been no statement from Justin Dean about how and why Mark Driscoll could go from sharing how in 2006 he approached co-founding elders Mike Gunn and Lief Moi to plant Mars Hill with him because they were good dads and yet in 2013 was saying from the pulpit that the reason there was no childrens' ministry at the start of Mars Hill was there were no kids.

MALACHI: LIVING FOR A LEGACY
WHERE IS MY HONOR?

Here’s where we’re at: Recently, 10,177 adults in attendance across Mars Hill. Fifteen churches, five states. We count people because people count. We count people because people count, and it’s not just numbers, it’s faces and names. There are also almost 2,500 kids, right? Can we say, “Praise God”? We like kids. When we started Mars Hill 17 years ago, there wasn’t even a children’s ministry—because there were no children. [emphasis added] People are coming in, getting saved, getting baptized, getting married, getting pregnant. Ideally, that’s the order, OK?
Confessions of a Reformission RevMark Driscoll, Zondervan
ISBN-13:978-0-310-27016-4
ISBN-10:03-10-27016-2

... The church started as an idea I shared with Lief Moi and Mike Gunn. Lief is a descendant of Genghis Khan and his dad was a murderer, and Mike is a former football player. They proved to be invaluable, except for the occasional moments when they would stand toe-to-toe in a leadership meeting, threatening to beat the Holy Spirit out of each other. Both men were older than I and had years of ministry experience, and they were good fathers, loving husbands, and tough.  [emphasis added]...

Jamie [Munson] came to Seattle at the age of nineteen, drinking, smoking pot, and having spent most of his life driving around in a maturity cul de sac, listening to Bon Jovi albums in the great nation of Montana. In Seattle, he lived with his sister and brother-in-law, Jen and Phil, who had been with the church from the beginning. They were the first couple who showed up with kids when we were in our core phase. [emphasis added]

UPDATE
3-30-2015
10.50pm
one last thing before bedtime, if Justin Dean's taken the time to address Rob Smith directly it does retroactively cast at least some question on this statement from Mark Driscoll around the second half of July 2014:
http://web.archive.org/web/20141031232443/https://marshill.com/2014/07/21/the-weekly-7-21-14
https://gist.githubusercontent.com/anonymous/b1dd5d1b6b3a14b6e7f3/raw/6c9dfc093dda78bb1a6b7ae29a9909045ad2a9e3/MHMW20140718
...
As well, one of the things that has been complex is the fact that a lot of the people that we are dealing with in this season remain anonymous. And so we don't know how to reconcile, or how to work things out with, with people because we're not entirely sure who they are, and so that has, that has made things a little more complex and difficult as well. [emphasis added]

But if that was true what was with the history of attempts to contact bloggers privately on the part of MH pastors from time to time from 2007 to 2013?

Clearly Joyful Exiles was not the work of people who opted to stay anonymous and it had been up for a year or two by the summer of 2014.
http://joyfulexiles.com/

then there's this overview of the history of MH pastors contacting bloggers privately.
http://wenatcheethehatchet.blogspot.com/2014/10/publicly-dismiss-bloggers-in-general.html

Driscoll said "we're not entirely sure who they are" last year but it's hard to stand by that explanation now that Justin Dean's insisted on bringing up tax liens against Rob Smith.

Note Justin Dean's comment "and you haven't produced a lawsuit in over a year."  Subtract at least 13 months from March 9, 2015 and we get ... what, February 2014?  Let's track back to the July 2014 statement from Driscoll.  So if Justin Dean knew that Rob Smith was saying or doing anything toward the end of litigation more than a year ago then doesn't this destroy any plausible deniability about the upper echelon leaders of Mars Hill being "not entirely sure who they are" as bloggers or critics of the leadership go? Did Justin Dean stop and actually think about that implication in what he wrote before he posted?  It doesn't quite seem like he did. If this is a misunderstanding of what Dean meant then, well, Dean's welcome to clarify things.
Posted by Wenatchee the Hatchet at 8:53 PM