on the seminal and continuing thematic link between Mark Driscoll's concerns about men and masculinity and those of Doug Wilson, an overview ranging from Pussified Nation to 2011.

There's something of note in the statements made by Mark Driscoll published by Christianity Today on Friday August 1, 2014.

"The content of my postings to that discussion board does not reflect how I feel, or how I would conduct myself today," he told his church members Friday. "Over the past 14 years I have changed, and, by God's grace, hope to continue to change. I also hope people I have offended and disappointed will forgive me."
The content of the postings on the discussion board made by Mark Driscoll under the name of William Wallace II may not reflect what Mark Driscoll feels now or how he would conduct himself today.

Fair enough, but the point Wenatchee The Hatchet has been discussing and presenting Driscoll material regarding throughout this week has not been about Mark Driscoll's feelings, as though in the history of Driscollian discourse feelings were even something for a guy to discuss to begin with.  No, to reframe these recent statements in terms that Driscoll himself might likely insist on doing for others, it doesn't particularly matter how Mark Driscoll feels differently now on the subject of masculinity and femininity compared to fourteen years ago.  The question that is far more relevant is what did Mark Driscoll THINK in 2000 and is there any observable evidence that what Mark Driscoll THOUGHT about men and women and sexuality fourteen years ago is observably different in substance now.  It's not as though Mark Driscoll hasn't made a career of making fun of guys talking about their feelings.

So, for instance, let's take the opening salvo of "Pussified Nation" itself. 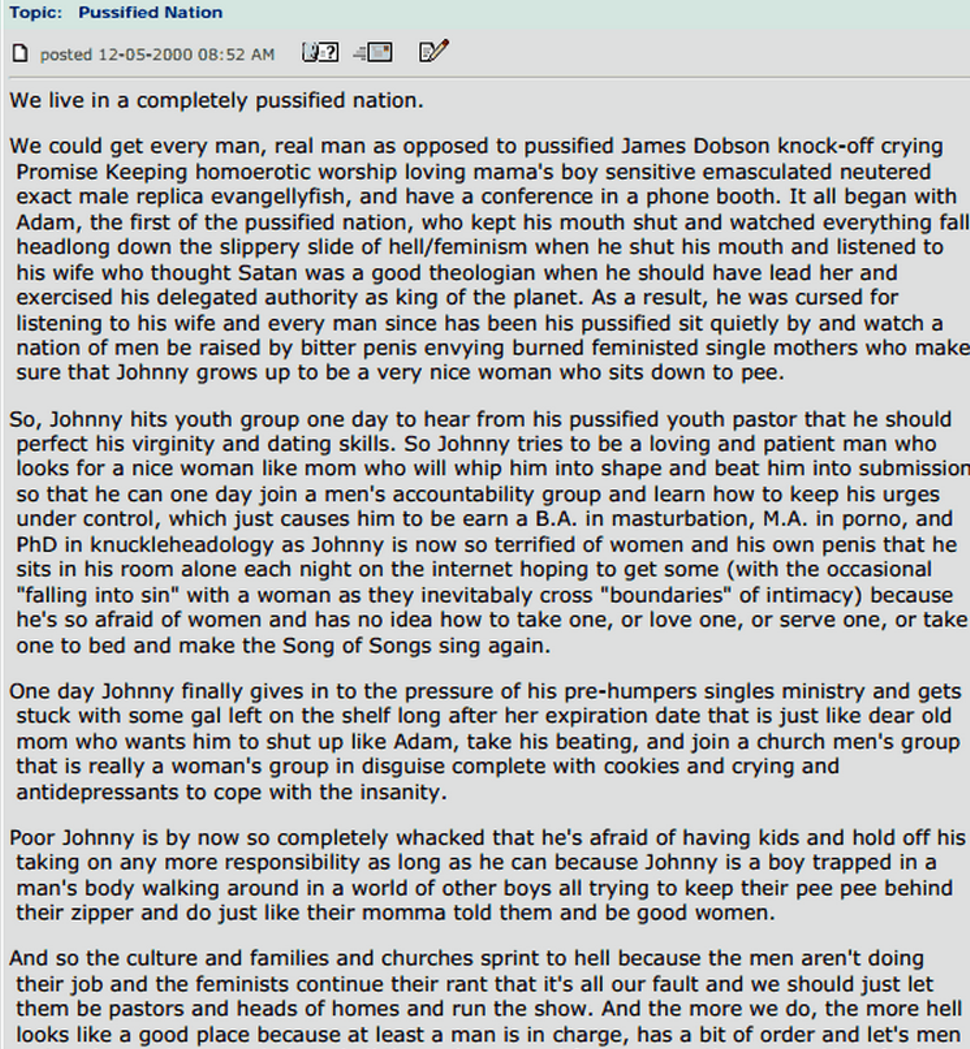 What's interesting about this opening salvo is that it so quickly tips off a reader familiar with seminal influences on Mark Driscoll's thought which author's jargon and jocularity may most resemble William Wallace II's initial post on "Pussified Nation". That last word in the italicized quote, "evangellyfish" where else can we find that?  How about the title of a book, a novel, published by Pastor Doug Wilson?

And let's consider whether Doug Wilson's work got reference by William Wallace II in "Pussified Nation". How about this?

William Wallace II
Member
posted 01-20-2001 01:34 PM
Good question.
One, don't spend all your time with single people. Get some good married couple friends to observe and dialogue with. This is one of the biggest problems with segmented ministry in churches, married and unmarried people are separated. Two, spend some considerable time in Scripture about marital matters so that you know  why, how, and what a wife and children are for. A good place to start may be in the Song of Songs, Ecclesiastes, and Proverbs. Three, some good books are helpful. On male sexuality I'd recommend "Fidelity" by Douglas Wilson. On male headship I'd suggest "Recovering Biblical Manhood & Womanhood" by John  Piper. "The War on Boys" and "Fatherless In
America" are great works by non-Christians. Four, be in a good solid church with qualified male elders who can have frank biblical  discussions about male issues without blushing. 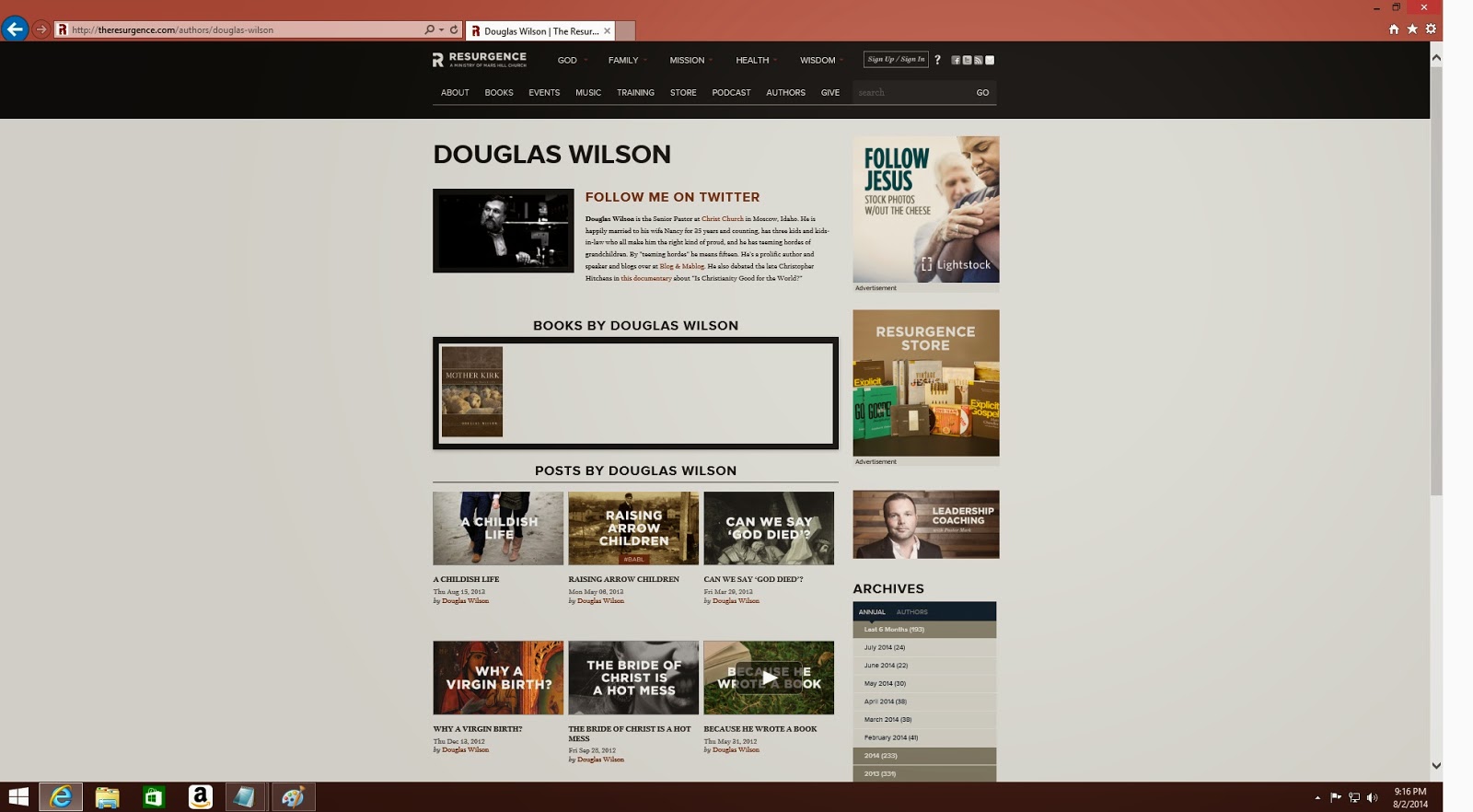 cue up the Bjork song "Possibly Maybe" if you're so inclined

If Doug Wilson is a featured guest author at Resurgence that "might" suggest that since the days of "Pussified Nation" that whatever different feelings Mark Driscoll might have these days his thoughts about gender and marriage are sufficiently congruent with those of Doug Wilson, whose writing Driscoll referenced as quoted above, that Wilson has a space on the Resurgence website to this very day.  That is more than can be said for John Catanzaro these days.

For that matter, back in 2011 Mark Driscoll mentioned the following at Pastor Mark TV.

http://pastormark.tv/2011/10/04/grace-agenda-a-conversation-with-doug-wilson-on-spiritual-gifts
On September 16 - 17, 2011, I had the opportunity to speak at the Grace Agenda hosted by Doug Wilson. As part of the conference, Doug interviewed me on a number of topics. Over the coming weeks, I'll post up some of those interviews. The following is a conversation Doug and I had regarding spiritual gifts and cessationism.

Should you want to go buy the whole set of conference discussions ...

Modern society is in the midst of a fatherhood and masculinity crisis and getting the Gospel right on this point is the only solution to the crisis. To do this we must understand the Gospel as the sort of message that demands that those who receive and present it be people who have a spine and understand its potency. This is a fundamental issue and affects everything from the integrity of our political leaders to the growth of modern atheism to the effectiveness of our evangelistic mission. Not to mention the health of our families.
That synopsis doesn't look particularly different in its essential concerns from anything broadly articulated in the opening of "Pussified Nation".

Now to be sure Driscoll probably still differs significantly with Wilson on the antebellum South but Driscoll has not made a point of contesting Wilson's ideas about the South, though if the two ever decided to debate that set of issues that could be a potentially interesting debate.  But on gender and masculinity Driscoll and Wilson have shared enough core ideas (regardless of whatever Mark Driscoll's feelings might have been this week) that they have continued to interact with each other and Wilson's works are still mentioned at Resurgence.

If you are familiar with the polemical writings of Doug Wilson you might say that "Pussified Nation" could be described as Mark Driscoll taking Wilson's polemical approach, pumping it up with steroids and amphetamines, and letting it loose to see what happened.

It's not really enough to have just published "Pussified Nation" as a stand-alone exemplar of Driscollian polemic from 2000.  It's necessary to ground not merely the rhetoric and sentiment but also the ideas in time and place.  Driscoll clearly could not have gotten his ideas in a vacuum and as the plagiarism controversy surrounding how many of his books made use of the ideas of others without citation the recurring reference by Mark Driscoll to Wilson's works might just make it all the more salient to remind the general public that Driscoll found Wilson's ideas about gender important enough to both mention them in the body of "Pussified Nation" and to even participate in a conference with Wilson in 2011.

While Driscoll can express regret about how he said what he said the substance of his ideas seems to have remained steady.  If he wants to persuade the world he's changed a few sermons extolling the beauty and value of stay-at-home dads might be a great move to convince outsiders he's changed.

Posted by Wenatchee the Hatchet at 10:18 PM