an analysis of Matiegka's Op. 20, No. 24 march, a miniature sonata form

Having written about Matiegka's guitar sonata in the past I would be remiss to not write about what I regard as another one of his sonata forms, disguised in plain sight in his Op. 20 set of 24 progressive pieces.  There's a video with audio from Giulio Tampalini's new recording of the complete solo guitar music of Wenzeslaus Thomas Matiegka up on Youtube.

Now I've written in the  past about how Sor had a sonata movement in E flat major tucked away in his cycle of progressive studies.  That essay is over here.

It was intriguing to discover Matiegka wrote a sonata more or less disguised as a march in E flat major, too.  His E flat sonata march is more lightweight than Sor's, I'd say.  The reason is because when I say Matiegka wrote a march in sonata form he did something I've spotted in a couple of sonatas by Molino and, I think, in Molitor.  There's a pattern with some of the lesser known and, how do we put this indelicately, the guitarist composers who are regarded as lighter weight (though I wouldn't personally say this about Matiekga myself because I love his sonatas)--there's what I call a "half and half" approach to exposition and recapitulation.

What I mean by a "half and half" approach is that the recapitulation can be thought of as the "normative" or "complete" form of the theme, which is then modified just enough so that the two segments of the otherwise complete theme are ruptured for structural reasons.  The halves are separated by whatever is needed to ensure they fulfill the structurally necessary separation required for contrasts at a rhetorical or tonal level for a sonata exposition.

Let's take Matiegka's Op. 20, No. 24.  Theme 1 transpires in the first 12 seconds of the performance linked to above.  When the half cadence arrives we would think it would simply be the half cadence for the next part of the theme we've just heard and in a larger-scale work that would be true.  But this is a very small scale work, a single page, and so that half cadence turns out to shift.  We get the leading tone to B flat in a secondary dominant passage that turns out to lead to a continuation of the half cadence passage.  That's an accurate way of putting it but since Charles Rosen and other scholars discussing sonata have said that one of the tells for a sonata movement is that thematic material that is presented in the dominant tonal region in an exposition that is presented in the tonic tonal region in the recapitulation we shall soon see that, by that rule of sonata identification, Matiegka's Op. 20, No. 24 meets the criteria of being a sonata.

What I call Theme 2 shows up at 0:21 and consists of some block chords elaborated by swiftly descending triplet passage work. Isn't that what we just hear earlier?  Well, yes, and that gets to what I think is the "half and half" aspect of the exposition and recapitulation here.

But before we get that far let's note that everything in this opening thematic group repeats.  So at 0:32 we get a repeat of everything presented so far, basically the first three systems.  Once all that material repeats we jump into what I regard as the development section.  The first development presentation starts at 1:05, and that should tip alert readers off to the fact that Matiegka's approach to sonata form can be "old school", featuring not only observed repeats of his expositions but also of his development and recapitulation sections.  As Hepokoski and Darcy and other scholars have observed, in 18th century norms of what we call sonata movements the development and recapitulation spaces were often regarded as part of a "grand binary form".  So it was normal to repeat not just the exposition but also the development and recapitulation.  We see this in Haydn string quartets but we'll see it in Matiegka's Op. 31 sonatas, too.  There are, in fact, some pretty funny stunts Matiegka pulls in some of the Op. 31 sonatas to drive home that the repeat signs in the development and recapitulation parts of his sonata forms are not optional.  You have to actually observe them for his sonatas to convey their full sense (of humor, I would say, but a more detailed discussion of just how much Haydn's influence emerges in Matiegka's sonatas is a topic for another time).

So, the development starts at 1:05 in the video, and at the very end of the third system in the score, which I will provide here at the end of this discussion so you can see it for yourself.

Something Hepokoski and Darcy proposed in Elements of Sonata Theory is the idea that there is a rhetorical function to the sequence of themes and materials presented in an exposition.  They call this rhetorical presentation of themes "rotation".  What it means at a practical level is for however many "rotations" there are in a sonata movement, whether two or three as they describe them, themes will generally be presented in the order in which they appear, give or take the deliberate omission of certain themes.  In a "textbook" sonata if you have Theme 1 in G major, Theme 2 in D major and a closing theme in D major then the themes will appear in that sequential order in the development and in the recapitulation, too.  That won't always be the case, sometimes themes are omitted in a development and in other cases a theme may be extensively developed in an exposition and a development and then dropped altogether from the recapitulation region.  Hepokoski and Darcy call this sort of sonata a "Type 2".  That's not what we have here in Matiegka's Op. 20, No. 24.  We'll see and hear that he pretty studiously observes the sequence of materials in this development section.  You'll hear it and you'll be able to see it, too.  I've charted it out in a score analysis.

What Matiegka does is cycle through a couple of key regions, G major, and bits of C minor, before landing on what "should" seem to be a half cadence dominant pedal point preparation for a move to G major, except that it turns out to be a leading tone pedal point passage that is resolved by the return of the first idea of the piece in E flat, which is what we would expect to happen in a sonata movement.  What I regard as the recapitulation first appears at about 1:59.  From the recapitulation onward we hear all the materials we heard early in the work but with everything transposed to fit into E flat major.  What has taken place is the theme sounds like it would if it were never broken into pieces and made into the basis for a sonata exposition.  Depending on what you feel a sonata form "ought" to do this could feel remarkably lazy on Matiegka's part or it could be kind of cute and charming and a tiny bit funny.  I can see and hear it both ways myself.

The recapitulation ends at 2:31 and immediately at 2:32 we go back via repeat sign to the development section.  There's a seamless flow from the final cadence at the end of the recapitulation to the dominant harmony as follow-up phrase in the renewed development section.  This is a more modular or circular approach to sonata form than we would likely see later in the Romantic era, particularly in the keyboard literature.  The materials are not developed all that intensely in terms of gestural transformation but relative to the size of the exposition and recapitulation spaces the development here is fairly substantial.  When the piece comes to a grand total of four minutes with all possible repeat signs observed we're clearly talking about a small scale form.  It is a march, certainly, but it's a march that Matiegka, if you will, reworked into a sonata movement.

You can see for yourself and hear for yourself.  Certainly there's always room for disagreement about these things and how could classical guitarists not disagree about matters of interpretation and score editions and all of that?  Even so, I think I can make a plausible case that Matiegka's Op. 20, No. 24 should be thought of as a small scale sonata movement.  Rather, I think I have made that case in writing and that what Matiegka put in his score backs up that interpretation. 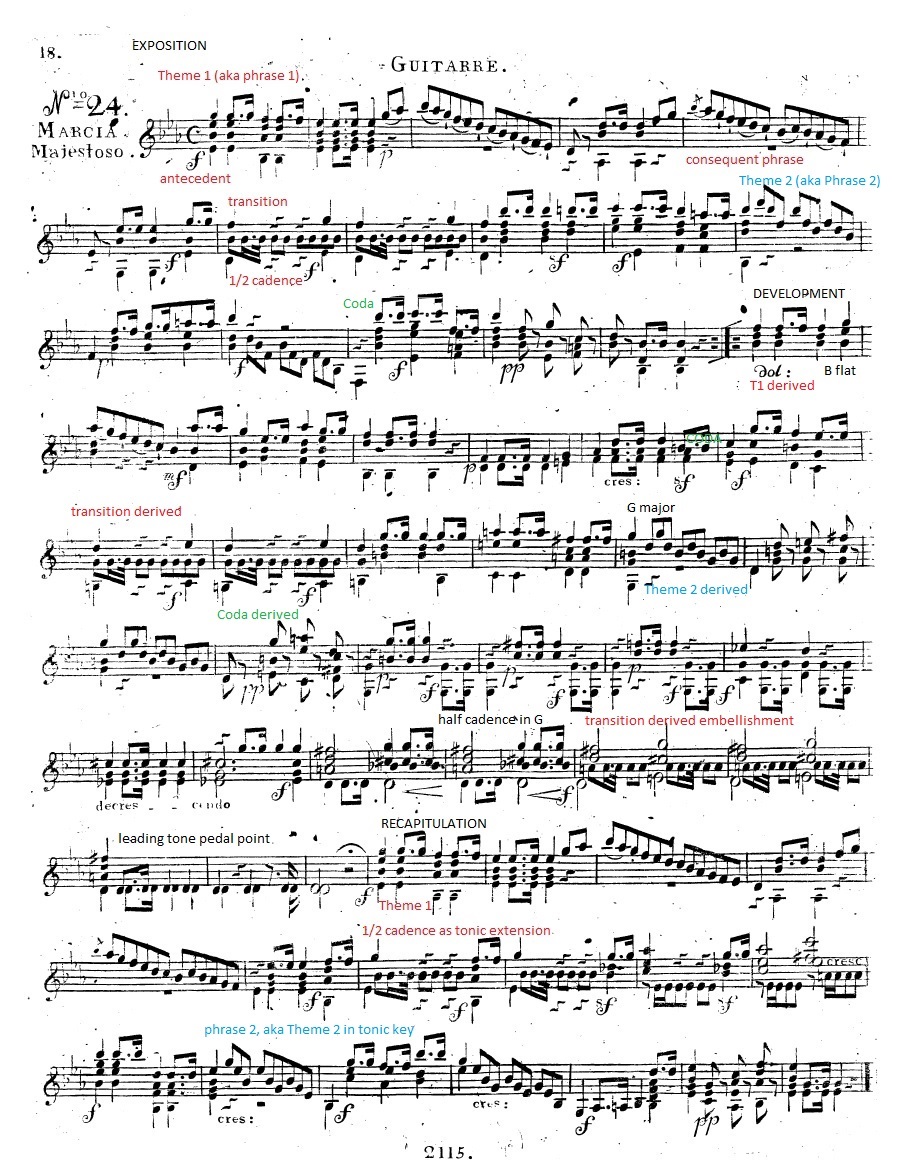 I wouldn't hesitate to say that Sor's Op. 29 E flat study is a more compelling and rewarding sonata movement but I have pretty much said I like Matiegka's work overall and like his approach to sonata forms.  This isn't Matiegka at his best but any guitarist who can compose any kind of sonata movement in E flat major is someone worth some study, given how many times I've heard and seen guitarists say that somehow our instrument is not amenable to sonata forms.

The score came by way of what was once available on IMSLP and isn't there any more.  I got the PDFs back when they were available a few years ago.  Overall I'm afraid I'd have to say that the majority of Op. 20 left me indifferent.  There are a handful of cool movements in the cycle but Matiegka shines in his sonatas.  His approach with variation technique and form is ... eh ... kind of like a lot of virtuoso variation sets from the early 19th century that, as Elaine Sisman put it, were regarded as a kind of bane on musical life by commentators from that time.  All that griping withstanding, I really did enjoy this last piece in Matiegka's Op. 20 cycle, enough that, of course, I've gone to the trouble of writing about it.
Posted by Wenatchee the Hatchet at 8:28 PM