At the risk of being every so slightly lazy I'm not bothering to analyze the introduction. It's an introduction and so it does what it's supposed to do.  Instead I mean to discuss the exposition, development and recapitulation of Molitor's Op. 7 guitar sonata.

Theme 1 begins two four-measure phrases, the second of which elides into what I've labeled Phrase 2, a cadential evasion phrase that is repeated before finally arriving at a tonic key authentic cadence in A minor.  This three-times repetition of a thwarted cadential resolution that finally arrives at A minor is something we'll see in the slow movement of Matiegka's Grand Sonata II, movement 2 but it's something we see here in the fast sonata form Molitor presents in his Op. 7 as well.

The transition begins as soon as the first authentic cadence in the tonic key is established (highlighted in green) The sixteenth note descending half-wedge motiff alternating after jumping eight-note bass riffs sums up the core of the transition.  This outward expansion/alternation from a fixed tone foreshadows the thematic core of Theme 2 (and we can think of Theme 2 through the close of the exposition as the Second Group).  If the opening short theme was typified by descending gestures Theme 2 is characterized by more complex phase groups. Phrase 1a and Phrase 2 present half cadence endings, followed by a return of Phrase 1a that establishes an authentic cadence in C major.

The end of Theme 2 is elided into the start of Theme 3 (aka the closing theme), which extends the idea of the repeated note as the basis for a theme even further and deploys chromatic descent as a way to add an additional element of contrast to the predominantly diatonic themes in Theme 1 and Theme 2. Theme 3 is also quite long and can be broken into two parts. The first part is the aforementioned chromatic descent theme while the second part is an obviously cadential set of turns of phrase that bring the exposition to a close, before the exposition repeats and before the development proper begins.

Something worth noting this far is that Theme 1, even when we include the three statements of its cadential formula, is twelve measures long. The modulating transition is twelve measures long. Theme 2 is sixteen and a half measures long, while Theme 3 (in its two halves) is twenty-two measures.  So Themes 2 and 3 altogether are about three times as long as Theme 1 and that's IF we count repetition of the cadential formula as an inherently necessary part of Theme 1.

If we regard the repeating cadential turns as an extension that does not necessarily reflect any "essential" core of Theme 1 then Theme 1 is a mere fraction of the size of Themes 2 and 3.  This drastic difference in proportional length (and the corresponding repetition of the exposition) highlights a pattern I proposed at the beginning may be relevant to whether or not a sonata will have a truncated recapitulation that omits Group I material, the presence of a Theme 1 that is significantly shorter than Themes 2 and/or 3 together.

Having written all that, you can peruse the score for  yourself. The exposition can be read below the break.

and here it is. You might want to collapse all the menus on the side of the blog for optimal reading. 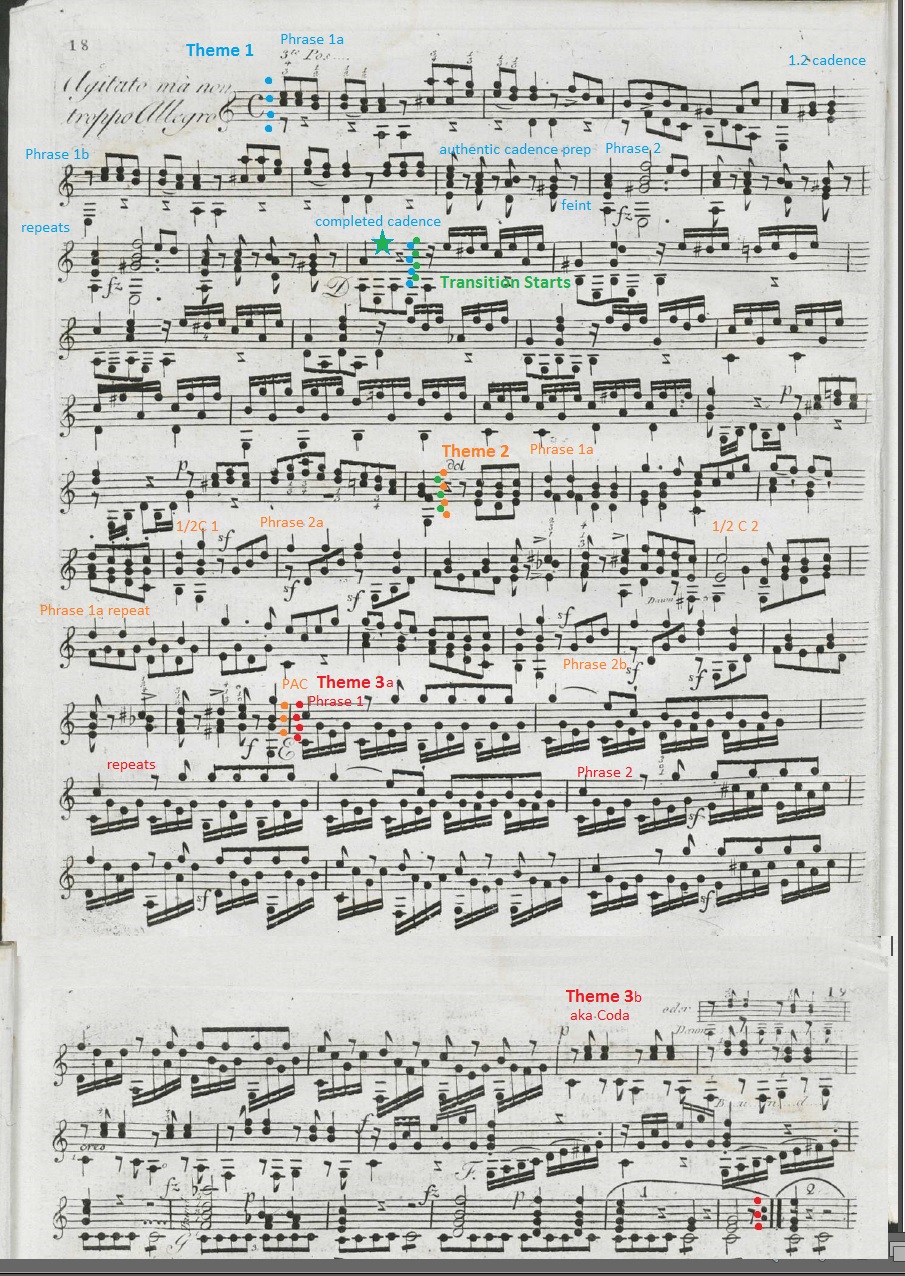 and in the next post we'll get to the development and recapitulation.
Posted by Wenatchee the Hatchet at 5:30 PM