from footnote on page 252
... The propagandist is a technician and a member of an aristocracy of technicians that establishes itself above the institutions of a democracy and acts outside its norms. Besides, the employment of propaganda leads the propagandist to cynicism, disbelief in values, non-submission to the law of numbers, doubts on the value of opinions, and contempt for the propagandee and the elected representative; he knows how public opinion is fashioned. The propagandist cannot subject himself to popular judgment and democracy. Finally, the propagandist is privy to all State secrets and acts at the same time to shape opinions: he really has a position of fundamental direction. The combinations of these three elements make the propagandist an aristocrat. It cannot be otherwise. Every democracy that launches propaganda creates in and by such propaganda its own enemy, an aristocracy that may destroy it.
Ellul was, of course, writing about propagandists in politics.  But it's shooting fish in a barrel to talk about the applicability of his observations about the new aristocrats to the mass media or to politicians.  The proposal of who and what this newer sort of aristocrat the propagandist was seems like it needs to be broadened.  Ellul could have just as easily mentioned marketers as the technicians and aristocrats of the age.  Anyone in marketing could be construed as part of this aristocratic class.  Anyone who would say the content's no big thing and that the marketing and promotion is what matters could be said to either be "in" this aristocratic class or sympathetic to its power.

And within the era of unaffiliated self-contained megachurches, a president of a megachurch corporate entity can also be a propagandist, a self-selected aristocrat, master of a massively integrated multi-media platform.  So Mark Driscoll can be thought of not only as a propagandist but an aspirant propagandist who, perhaps most remarkably, never hid that this was essentially core to his ambitions from the start.

The presentation linked to above was from 2013.  Driscoll had managed to land the NYT best seller list through the as yet-unrevealed machination of Result Source. He'd also managed to get quite a following and gain a lot of influence.  If you listen to the entire thing you'll hear that it was a presentation on the imperative of content production, distribution, multiplication (read that as recycling the same content across every type of platform for higher impact) and defense.

Now we may want to take a little aside, as so often happens.  Back in March 2014 Driscoll was talking about how what Mars Hill had become was "not even close" to what he envisioned:

For those of you who have been around for a while, it is amazing for us to see all that Jesus has done. People often ask if our church today resembles what I had originally planned. Not even close. The smallest location of a Mars Hill Church is bigger than what my total vision was for the whole church when we started.

This claim was so dubious on its face to anyone who was part of Mars Hill from, oh, 1995-2013 and paid attention, it warrants a Driscoll-quoting rebuttal.
God's Work, Our Witness Part 1
Pastor Mark Driscoll
December 04, 2011
about 12:30 in

You know, and I thought, for sure, we’d probably tap out at two hundred. I thought if we can get this
thing to two hundred, that would be amazing.

And I had big vision for more. I put together a forty-page vision statement. I said, “We’re going to
start a school. We’re going to plant churches. We’re going to do a record label.” I had this whole vision, and I handed it out to, like, fifteen people, and they’re like, “Are you kidding me?” [emphasis added]

So I had big dreams. But to be honest with you, man, if we could just get up to two hundred, I thought that would be amazing. 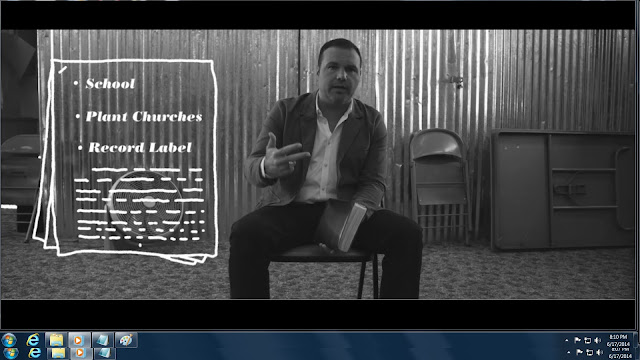 from pages 53-54
So in an effort to clarify our mission, I wrote down on paper the first of what would eventually be many strategic plans. I shot for the moon rather foolishly and decided that our church that was not big enough to fill a bus would plant multiple churches, run a concert venue, start a Bible institute, write books, host conferences, and change the city for Jesus. I started handing out these goals printed on boring white paper without any graphics, colors, or cool fonts, naively assuming that it would all happen eventually just because it was what Jesus wanted.  [WtH--or what Mark Driscoll claimed Jesus wanted, at any rate]

To get leaders in place for world domination, I also spent time trying to articulate the vision in my head to good men who would be qualified to rise up as fellow elders-pastors. So, as Jesus did, I spent time in prayer asking the Father which of his sons should be trained for leadership. The church started as an idea I shared with Lief Moi and Mike Gunn. Lief is a descendant of Genghis Khan and his dad was a murderer, and Mike is a former football player. They proved to be invaluable, except for the occasional moments when they would stand toe-to-toe in a leadership meeting, threatening to beat the Holy Spirit out of each other. Both men were older than I and had years of ministry experience, and they were good fathers, loving husbands, and tough. ...
So as multiply attested by none other than Mark Driscoll himself, the goal he had in mind was to start something that would plant churches, make a record label, start an institute, and a few other things.  That's a vision of a fully integrated mass media enterprise spanning music and books and academics.  That kind of holistic interest in using all forms of technical use of media to drive home a single over-arching vision is kind of looking like that perspective of a propagandist, a little, doesn't it?

If we're using Ellul's way of defining propaganda and propagandists then not just Mark but to some degree even Grace Driscoll, too, could be described as a couple that aspired to attainment in what Ellul called the aristocratic class that would control media and become a threat to the healthy function of democracy.  To go by the way governance inside Mars Hill spun out into what seemed to be an increasingly autocratic and secretive regime of a megachurch what Ellul had to say about propagandists in politics may have proven equally true of propagandists who are more officially called megachurch pastors.
Posted by Wenatchee the Hatchet at 1:47 PM

Email ThisBlogThis!Share to TwitterShare to FacebookShare to Pinterest
Labels: Ellul on propaganda & MH