Driscoll at Gateway, stated they moved three times over safety issues. 3 moves in fourteen years are established by county records but 3 moves in a "season" is fuzzy

from October 20, 2014 statement made by Driscoll at Gateway Conference
http://wp.production.patheos.com/blogs/warrenthrockmorton/files/2014/10/Transcript-Robert-Morris-Mark-Driscoll.pdf
...
would you mind if I shared a story or two? Uhm, is that okay, like? Um. I, I’ve cried a lot lately uhm er it’s been a rough season for the family. I guess you could take a seat. Um, (laughter) and um, and for those of you, I would say don’t overlook your family as first ministry. Uhmm. And for me we’re just really appreciate your prayer for our family. We’ve got five kids, three boys, two girls, ages 8 to 17 and uh we’ve moved three times now for safety issues. [emphasis added] Uhm. People arrested at our home, death threats, uh address posted on-line, all kinds of things and uh more recently it’s gotten very severe.
We came home from break. There was rusty nails all over the driveway. We uh, we uh we had a night where the kids wanted to sleep out in the tent and uh I got a call that um my uh address was posted on-line by the media and um so, we, we, we went out of town for a few days, came back uh the kids said ‘no, we gotta sleep in the tent so I didn’t sleep. But we, we were in the tent all night and uh, woke up in the morning about 6:30or so and huge rocks about the size of baseballs come flying at my kids uh 8, 10 and 12 years of age. Call the police. Flee into the house for their safety. Uh a few days later. I think it was, I don’t remember, the media flies overhead with a helicopter and is trying to flush us out for a story. And uh that night uh we’re hiding in the house, my 8 year old son comes down and he’s wearing a military jacket, he’s loading up his Air Soft rifle (laughter)and he uh (MD chuckles) he looks at me and he says ‘hey dad is this uh is this jacket bullet proof? (soft laughter)and I just started crying and said, ‘why’s that little buddy?’ and he said, ‘Well it’s bad guys in the helicopter coming to shoot the family, right?’ He didn’t have any concept of, of media coverage, he thought it was bad guys coming to kill his family and he was gonna defend his sister (faint laughter) and so uh praise God he’s finally sleeping in his bed again, but it’s been a while to get him to do that with night terrors and so, there’s just a lot going on for our family, I appreciate Pastor Robert and the team here. I just want to come here to uh sing, to pray, uh to learn, to grow, uh to repent, to heal and uh uh God is surrounding me with some great pastors and friends, and if I could just say anything, it’s ‘every pastor needs a pastor’. And and, uh you pastors, your family needs you to be their pastor. ...
The Driscolls have moved around a bit and moving three times out of concern for safety issues might be completely true.  Mark Driscoll just didn't mention the time frame in which those three moves happened.  An uninformed listener (i.e. literally everyone at that conference) might get the impression that the three moves happened within the recent season.  That would be a bit difficult to establish beyond any doubt.  If one cast the three moves in terms of the last decade then, well, it's easily proven based on county records.  But let's revisit what the first move in the last fourteen years might have involved.

At this time, our church also started an unmoderated discussion board on our website, called Midrash, and it was being inundated with postings by emerging-church type feminists and liberals. I went onto the site and posted as William Wallace II, after the great Scottish man portrayed in the movie Braveheart, and attacked those who were posting. It got insane, and thousands of posts were being made each day until it was discovered that it was me raging like a madman under the guise of a movie character. One guy got so mad that he actually showed up at my house to fight me one night around 3 a.m

So as recounted by none other than Mark Driscoll himself in the wake of his rants as William Wallace II someone wanted to go fight him one night around 3 a.m. 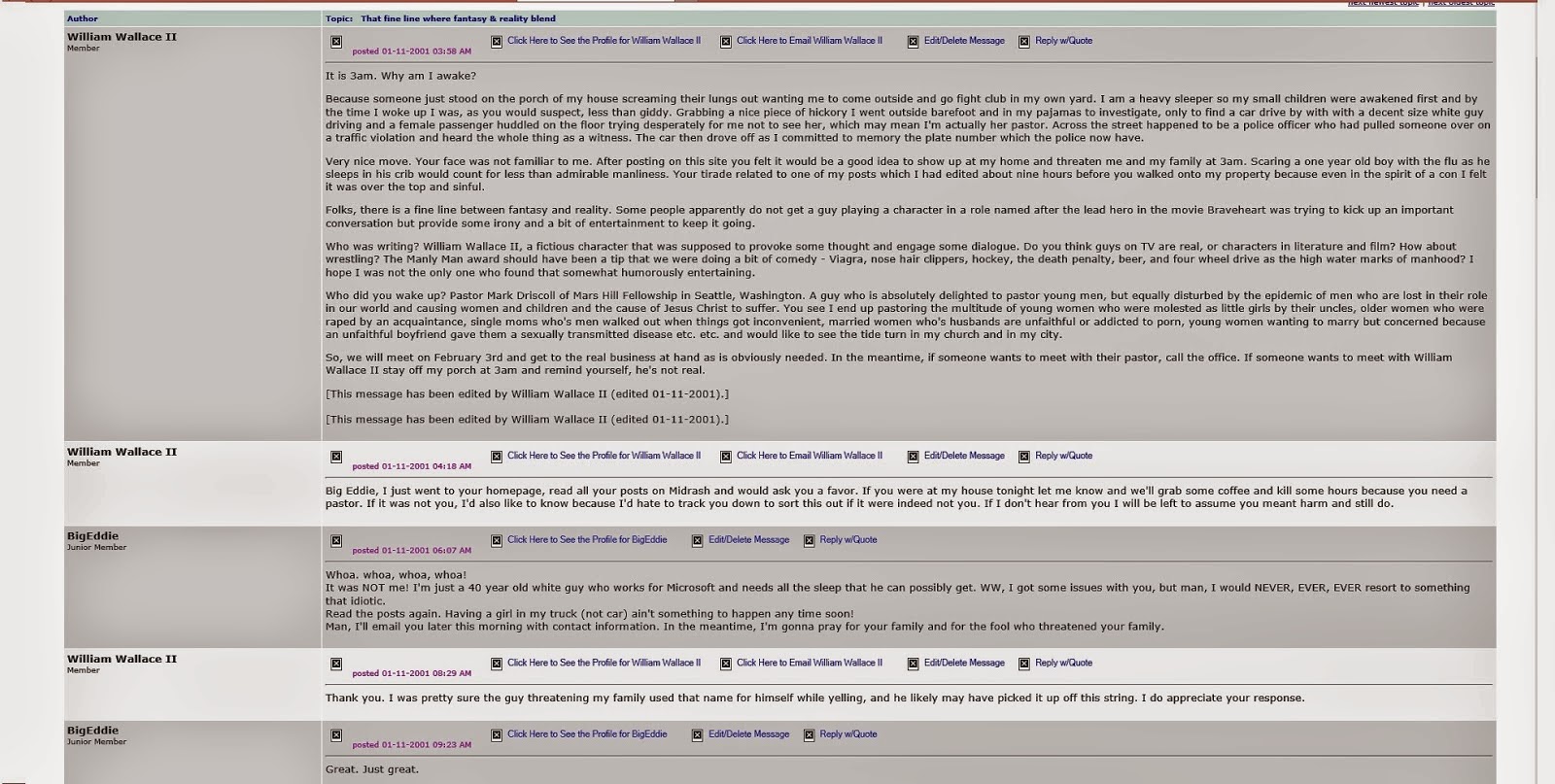 So it seems there's evidence enough for at least one incident of a guy looking for a fight.  That was back in 2000.  Not exactly the post leave-of-absence season.

The Driscolls were at that house in Montlake until about 2003. They moved again in 2005.  The next move was ... if memory serves 2012.  So there were three moves since 2000 and Driscoll has said they moved three times over safety concerns.  Driscoll's antics as William Wallace II may have played a significant role in, even by Mark's account, one incident in which his family was troubled.  So the moves for safety would fit the county-documented moves Wenatchee The Hatchet has managed to observe but this would be over a fourteen year period and not the recent season in which Mark Driscoll was on leave and then resigned.

asdf
Posted by Wenatchee the Hatchet at 10:24 PM

Email ThisBlogThis!Share to TwitterShare to FacebookShare to Pinterest
Labels: gateway conference, mark driscoll and the power of the sob story, resignation