about the Mars Hill Global memo on the sleeping giant ... the only power the rank and file member has is basically withholding money

It's bad.  As in Wenatchee The Hatchet feels obliged to write a post saying that it's unusually bad even for a lot of bad things associated with Mars Hill over the years.

And it's not as though Wenatchee The Hatchet hasn't seen and read a lot of damning stuff over the years, some of which won't get published here out of a sense of discretion and compassion for people thrown off and under the bus.

In other words, the stuff that's coming to light is the stuff that's rising to the top of the pool.  You might not even have any idea what's under the water. None of us might.  Well, some might but they might have non-disclosure agreements.

Wenatchee has said this before and will say it again, the corporation known as Mars Hill Church is showing that its leadership at the top is not worthy of financial support and has shown itself completely unwilling to be financially transparent.  Don't give them a cent until they open all the books across the board.

At this point reconsider even giving to the local campus.  By now you can't be sure that even if you strictly designate your donations to go to the operating costs of just your campus that Mars Hill will pay any regard to that restriction request.  Wenatchee The Hatchet has met at least a couple of former members who discovered that gift restriction didn't stop MH from dumping things into the general fund for year-end letters.  Alas nobody is yet comfortable enough to speak up on record to that end but there's enough stuff that is coming to light that if you think the leaders are going to be faithful with the monies you donate think again.

IF they can't be honest about how they're spending the money and how they're soliciting money why give them anything?

Wenatchee The Hatchet avoids framing things in terms of moral outrage but this burgeoning stink with Mars Hill Global is despicable.  It's not like we're talking chump change here.  Wenatchee was given these quite a while back but sat on them because real estate acquisition and governance adjustments were higher priorities.  Global seemed a bit opaque (and now it turns out there was a reason for that!) and Wenatchee figured Throckmorton seemed to have that mainly under investigation.  So, here you go, some samples from the past to clarify that we're not talking nickels and dimes by now. 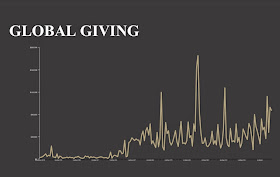 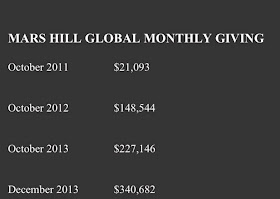 Mars Hill members, the leaders have said you ultimately have the power for them to give you as much "church" as you give them money to play with.

But if the church is a people and not a place you don't have to give them one cent any longer.

Look, Wenatchee was once such a one, a member of Mars Hill faithfully giving year after year.  The news about how Mars Hill bought a boondoggle in Ballard was a rude awakening.  It has become apparent to WtH that nearly ten years later there is no sign of a significant improvement in fiscal competence or foresight with respect to expanding beyond the capacity to cultivate a healthy donor base.  Sure, some things improved but going from a yearly to a weekly budget for accounting intake is worthless if the fundamental approach to output doesn't change.  It doesn't matter how sacrificially you give, members of Mars Hill, you're in a culture where the leadership has shown at nearly every turn they are willing to spend more than you give and to gut the lower level employees to "meet budget" without disclosing how much the top pastors make or even where some of them live.  That Mark Driscoll has transformed into everything he preached against is easy to say but Wenatchee The Hatchet has spent a few years demonstrating how and in what ways that transformation occurred.  If you don't have the patience to track that, that's understandable.

In other words, it is ultimately our people, not our leaders, who determine how much “church” we are able to provide.

In light of the recently published memo what's no longer understandable is why a Mars Hill member would keep giving money and just "trust the elders".  Even if you trust your campus pastors you don't realize how much power Central has over whether or not they even get to have any of their people on staff.

If the leadership of Mars Hill is only willing to tell members in the trenches how much power they have when that power has been used to withhold money leadership has used, then by the measure of Mars Hill leadership appeals, it seems the ultimate expression of power from the regular attenders of Mars Hill would be absolute withholding of money from Mars Hill the corporation until there's a full accounting of where all that money went.
Wenatchee the Hatchet at 11:33 PM
Share