Mark Driscoll and the power of the sob story: part 5 October 26, 2013 "The Hardest Part of Ministry"

This material was originally discussed over at this blog post and elsewhere.

The following link is now 404.  Don't bother with cache too quickly as robots.txt may preclude any useful results.  Why this material was taken down is hard to explain but since Wenatchee The Hatchet preserved the whole thing ... perhaps we can just revisit it. 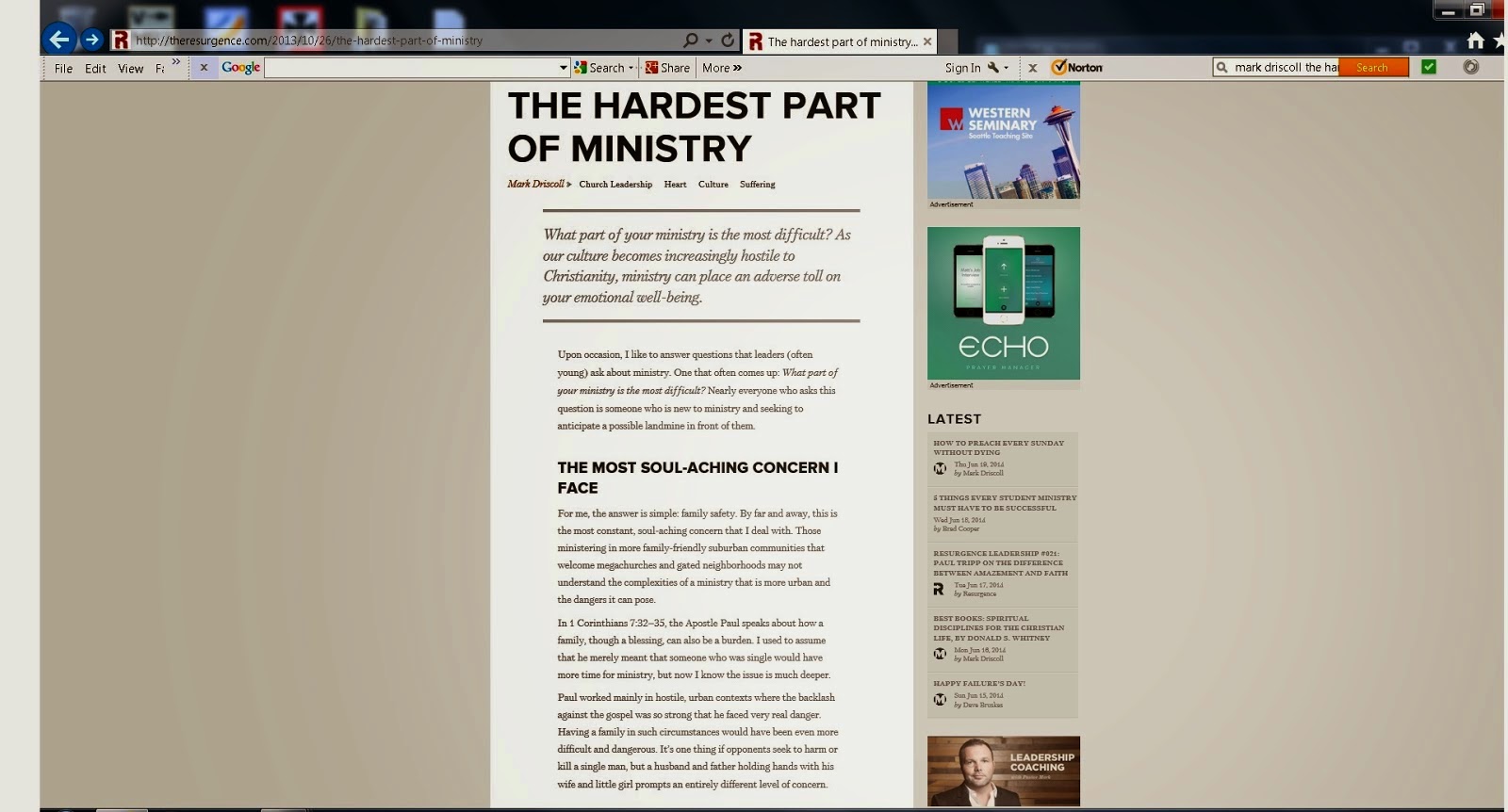 What part of your ministry is the most difficult? As our culture becomes increasingly hostile to Christianity, ministry can place an adverse toll on your emotional well-being.

Upon occasion, I like to answer questions that leaders (often young) ask about ministry. One that often comes up: What part of your ministry is the most difficult? Nearly everyone who asks this question is someone who is new to ministry and seeking to anticipate a possible landmine in front of them.

The most soul-aching concern I face

For me, the answer is simple: family safety. By far and away, this is the most constant, soul-aching concern that I deal with. Those ministering in more family-friendly suburban communities that welcome megachurches and gated neighborhoods may not understand the complexities of a ministry that is more urban and the dangers it can pose.

In 1 Corinthians 7:32–35, the Apostle Paul speaks about how a family, though a blessing, can also be a burden. I used to assume that he merely meant that someone who was single would have more time for ministry, but now I know the issue is much deeper.

Paul worked mainly in hostile, urban contexts where the backlash against the gospel was so strong that he faced very real danger. Having a family in such circumstances would have been even more difficult and dangerous. It’s one thing if opponents seek to harm or kill a single man, but a husband and father holding hands with his wife and little girl prompts an entirely different level of concern.

I recently celebrated 17 years of ministry at Mars Hill Church in Seattle. Before that I spent a few years doing college ministry, which means I’m knocking on the door of 20 total years of ministry service, by God’s grace. Here’s a partial list of some of the dangers I’ve encountered so far:

On two occasions, men brought large knives into the church and started approaching the stage to stab me while I preached. Our security team prevented this and law enforcement was called.

On one occasion, a man tried to get into my home in the middle of the night. Demanding to meet with me, he woke up and frightened my family. The police arrested him and put him in a mental health facility. The man escaped and started walking back to my home in his underwear. The police intercepted him when he was not far away.

Twice I have arrived home from work to find a registered sex offender seeking to engage with my family while waiting to talk with me.

A few times someone showed up at my home to cuss me out in front of my family.
I received a letter from a troubled man who said he heard voices telling him I either needed to stop preaching or he was supposed to drive to Seattle and make me stop preaching. When I checked the address on the letter, I noticed it was from a state prison. He was incarcerated for a violent crime and, according to the parole officer we contacted, in the process of being released.

On multiple occasions, while I was traveling out of town, people would post directions to my house on social media and encourage my critics to come to my home. This caused great anxiety for my wife and children because every time I travelled they felt unsafe and in danger. Nearly everyone who has ever done this to me has claimed to be a Christian, and none have children but they’ve shown no regard for the safety of my own.

Last year I came home from a day at the office to find an enormous pile of human excrement on my front porch. Not in a bag or shovel in sight, someone apparently dropped their drawers to leave a “gift” on my porch. This happened while my family was home and unaware of what was going on.
Whenever there is a threat risk according to a police officer, my kids actually know the drill: don’t go near dad at the church or event, sit far away, and pretend like he’s not your dad in public.
I literally had to hold back tears when the reality of the safety issue hit me in a big way. My two younger kids asked, “Dad, is it safe to go out and play today, or are the people who hate you coming over?” The fact that my little kids have to worry about harm invading their own yard is something I grieve.

Add to this the safety issues posed by technology. I cannot fathom allowing my two teenagers to be on social media for fear of the venom they would receive. When my kids have to report on current events at school, they’ve learned to ask before they click on to news sites, since I never know who is saying what about me where.

Add to this the gossip that surrounds me, which once compelled an older woman to approach me at church and ask, while our children listened on, why I beat my wife, Grace. The woman just assumed that what she’d read online somewhere was true, despite the fact I have never and will never raise a hand in anger toward my wife or children.

In general, going out in public has gotten tough. People feel free to interrupt family dinners out to sit at the table and either cuss me out or talk for a long time without permission. My kids have gotten so sick of strangers handing them a phone to take a photo that one of my kids recently told someone, “I’m his child not his photographer.”

The fact that my little kids have to worry about harm invading their own yard is something I grieve.
Some people are just cruel. I was running errands with my youngest daughter, our most sensitive and affectionate child. She was holding my hand as we were walking around a hardware store when an older woman who looked like a sweet grandma came up, smiled, asked if I was Pastor Mark, and then asked if this was my daughter. The woman got down on one knee to look my little girl in the eye and say, “I’m sorry you have such a horrible man for a father. He hates women, which means he probably hates you, too.” And she did not stop there. In fact, she would not stop at all and just kept going. I did not engage, but rather walked away holding my daughter’s hand, since she was bawling at this point from being startled.

Then there’s the downright bizarre. Some years ago I was standing in line to buy burgers for my kids when they noticed my face next to a column in one of Seattle’s alternative newspapers, and they asked why I was working for them. Apparently, the paper took my photo and name and started writing columns pretending to be me.

Where are we headed?

All of this is just another stressful day at work for me. But given the direction in which society is headed, other ministers may get to experience some of these same scenarios, and some already are. I’ve heard horror stories from other pastors who have a higher-than-normal profile. One had a critic post large “Wanted: Dead or Alive” posters of him around town. Another received a letter containing photos of his home along with a threat to rape his wife. Another had critics waiting to cuss him out at his child’s school since they could not get a meeting through his office. The list goes on and on and on and on.

The complexity of diminished safety that technology brings is unprecedented in the history of the world. What will things look like in 20 or 30 years if the culture continues to trend less friendly toward faith in urban areas, and if technology continues to encroach on privacy and civility? I predict we’ll increasingly have to “evangelize through suffering,” as I put it at the end of A Call to Resurgence. It’s hard to think about this without getting anxious.

Other ministers may get to experience some of these same scenarios, and some already are.
When people learn that my concern for family safety is the most difficult part of my ministry, I usually get the follow up question: Why don’t you just quit and go do something else or go do ministry somewhere else?

Yes, sadly this question is all too easy for me to answer, so your prayers are appreciated. I just turned 43. Lord willing, we have decades of ministry left to go, and honestly if I think about it too much I get depressed and anxious. For those ministering in similar contexts, I’m earnestly praying for you and your families as well.

The Mark Driscoll of late 2013 may be a mellower one than the one of 2004 who published Radical Reformission (recently republished as just Reformission, which might signal a lack of radicalness)

... So I married Grace, began studying Scripture with the enthusiasm of a glutton at a buffet, and started preparing myself to become a pastor who does not go to jail for doing something stupid. To pay the bills, I edited the opinions section of the campus newspaper, writing inflammatory columns that led to debates, radio interviews, and even a few bomb threats--which was wonderful, because the only thing worse than dying is living a boring life. [emphasis added]
Posted by Wenatchee the Hatchet at 10:03 PM