Who has done ghostwriting at Mars Hill Church over the years, a little help from Google and LinkedIn

Let's open up with a screen capture: 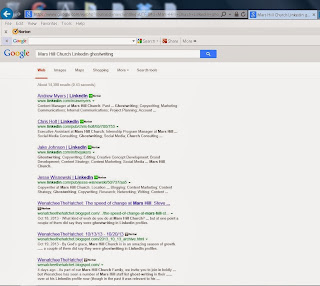 Nevertheless, since a proposal that Driscoll has not plagiarized but that, perhaps, a ghostwriter or assistant has some responsibility for what appears to be plagiarism, we can at least review some people who have ghostwriting as a skillset mentioned in their LinkedIn profiles who have some history with the church.  The case here is merely to establish that whether or not they did ghostwriting for Mars Hill Church specifically, people who have done ghostwriting are not hard to find who have had connections to Mars Hill.  That's all.  In fact we'll quickly see that none of these people explicitly mention ghostwriting (because, given the nature of the work, who would?) but it is listed as a skill or expertise.  With that in mind ...

Chris Holt
Jesse Wisnewski
Jake Johnson
For more background on Johnson go here and here for his role in a couple of Mars Hill Church projects.

Someone else who has some background in ghostwriting not captured in the above search would be Staff Writer Ryan Dorn.

So, again, while there's not a clear case that these people have explicitly done ghostwriting at/for Mars Hill Church the church is big enough to have had a group of members or staff with ghostwriting background.  That said, what Driscoll has mentioned in the past about how he assembles books suggests that his own personal assistants helped in putting book material together.  It's not a given that people who have done that sort of work would ever mention it in resumes on, say, LinkedIn.
Posted by Wenatchee the Hatchet at 11:26 AM

Knowing how things work, the likely Ghostwriter is the MH employee who next gets fired. If he/she wants any severance package, a gag order will be signed and he/she will join the world of ex MH employees that move on with little to say except that "God moved them on", but in reality their wonder and enthusiasm for being a part of the dynamic at MH will be crushed. I am praying for that poor soul already.