Required
•Leading on Empty by Wayne Cordeiro – ?
•Confessions of a Reformission Rev. by Mark Driscoll – ??
•Humility: True Greatness by C. J. Mahaney and Joshua Harris – ?????
•One biography from this list (others were also approved including the Whitefield bio that I read – ?????) ?Spurgeon: A New Biography by Arnold Dallimore
-Jonathan Edwards: A Life by Gorge Mardsen
-Luther: Man Between God and the Devil by Heiko Oberman and Eileen Walliser
-Calvin by Bruce Gordon
-John Calvin: A Sixteenth-Century Portrait by William Bouwsma
-ohn Calvin: A Pilgrim’s Life by Herman Selderhuis

Scott Thomas created the Gospel Coach Training and Certification system and has coached hundreds of pastors. Scott has served as president and network director of Acts 29 Network and as an elder at Mars Hill Church. Scott has a Masters in Missional Leadership and has been married for thirty years to Jeannie, with whom he has two sons. He planted and replanted churches for sixteen years as a lead pastor. Scott has taught for Resurgence Training Center in Seattle and is a conference speaker in the US as well as a consultant for both Western European church planting and Canadian church planting. Scott wrote Theological Clarity and Application (Zondervan, 2010) and has written blogs for Acts 29 Network, The Resurgence, Mars Hill Church and ChurchPlanting.com.

That Scott Thomas stepped down from leading Acts 29 about a week or so after Joyful Exiles went up is easily enough established.  If you're even reading this odds are good you read the earlier observation that the weekend after Joyful Exiles went up documenting, among other things, Scott Thomas' role in the removal of Meyer and Petry from eldership at Mars Hill, Matt Chandler wrote that Scott Thomas informed him that he (Thomas) felt released from leading Acts 29.  There were new ministry opportunities he was considering.  Exactly how long he'd actually been considering those could have been for years or, just as likely for all we know, that week.


It took a couple of months for any announcement as to where Scott Thomas was heading to materialize.  It certainly got no mention from Driscoll in "What's Next For Me".  But there was an announcement made by Darrin Patrick at an Acts 29 Retreat that Scott Thomas was going to be joining the team at The Journey from a June 19, 2012 tweet

Announcement at Acts 29 Retreat by Darrin Patrick about our new job at The Journey in St Louis. #Blessed. http://fb.me/SYbI1aZ2

Preaching both services at The Journey-Tower Grove, 9 & 11:15am, plus new worship. Join us! http://ow.ly/doNNU

Then there's this link, if it still works.

... and the membership covenant, which may still say the following:


So given what the Mars Hill membership covenant says about membership at Mars Hill and participation in ministry with other church families you would have thought that Thomas would have resigned his membership, wouldn't he?  Well .... maybe not so much. Here's a screen capture someone found for Wenatchee The Hatchet dated August 20, 2012 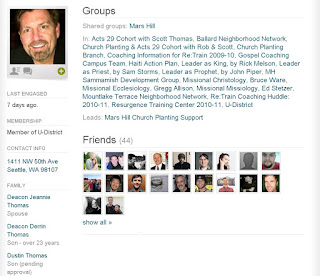 Not only was Scott Thomas still listed as a member on the City August 20, 2012, he had a campus affiliation at the U-District.  The stuff about Leader as Prophet, Leader as Priest, and Leader as King refers, probably, to the Resurgence Training Center coursework for the Masters in Missional Leadership which we'll be discussing more later on, we hope.
So ... by September 4, 2012, however, Thomas' profile had changed to this. 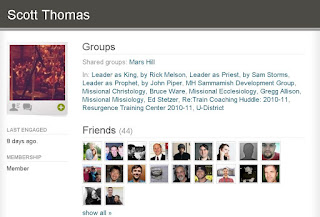 The campus pastors at the U-District at the time, if memory serves, included Justin Holcomb and Matt Johnson.  It seems more likely that someone with administrative capacity disaffiliated Thomas' membership from a campus than that Scott Thomas had bothered to do anything regarding his membership after tweeting about preaching sermons.

As to the persistence of that profile on The City ... well, when you're relocating yourself and your whole family to St. Louis to start a new job formally resigning membership or requesting a shut-down of your account on The City isn't very important compared to finding a home and things like that.  And, who knows?  Perhaps Mars Hill admins didn't stop to even think about Scott Thomas still having a profile on The City until it was pointed out to them in some fashion that Thomas still had a Mars Hill membership despite having preached sermons and mentioned being a pastor at another church.

So for those who may have wondered how Wenatchee The Hatchet worked out that Scott Thomas was still listed as a member of Mars Hill despite having preached sermons at Darrin Patrick's church The Journey; despite having transitioned out of leadership within both Mars Hill and Acts 29; and despite the rather simple fact that to serve in a ministry capacity with another church family violates the Membership Covenant a member agrees to at Mars Hill ... well, a little bird passed along a word.

And as words go, perhaps we can close with some observations from Scott Thomas himself via Twitter and associated media, and a few observations.

Use email to communicate, collaborate and clarify and never to correct. Never. Use the phone or face to face so that they can hear your tone, compassion and genuine concern for them. I only write emails that can be shared publicly.
﻿
After all, this isn't a witch hunt. Email should be used to clarify and communicate, although ...
3. Never communicate more than one layer up or down the organizational structure.

Hmm ... the importance of communicating only one layer up or one layer down is interesting.  Lazy or arrogant leaders skip the process of letting information cascade to the right people in the right order?  Well ... if you're skipping a few levels within the organization to explain that a conciliatory process had been completed with a couple of men that's fine ... just as long as what you communicated was actually true.  If this indicated the conciliatory process was complete ... .

Given what Driscoll said the day after two guys got fired for the first time in Mars Hill (whatever that means) on what basis would Thomas have been able to sincerely believe what he was managing was in any sense a "conciliatory process" given the way Driscoll spoke at an Acts 29 event the day after Meyer and Petry were fired?

4. Never communicate a major decision publicly before communicating it privately to key leaders.

When other leaders in the organization hear about decisions made that they had no knowledge about, it diminishes their ability to lead the people in their domain and it disrespects their role. We cannot expect our key people to buy into a decision if they have not had a chance to weigh in on the deision.
Perhaps Thomas learned all these lessons through, if you'll pardon the pun, trial and error.
Posted by Wenatchee the Hatchet at 3:42 AM