Now to date nobody from Osteen's camp seems to have confirmed that Mark Driscoll contacted Osteen, have they?

If Driscoll could feel convicted to reach out to Osteen to apologize, a guy that Driscoll doesn't seem to have met and who seven years ago had no idea who this Driscoll guy even was, why couldn't Mark Driscoll have met with people who posted at Repentant Pastor.

But, hey, if Mark Driscoll has felt convicted to issue public apologies regarding nasty stuff he's said about famous people who have never met him ...  and particularly if Mark and Grace Driscoll would like to clear up for the record that Mark Driscoll is not a misogynist ... then how about sharing some apologetic words with Adriana Lima?  For those who don't remember Mark Driscoll's little rant.  Check it out after the break. This was stuff from the fall of 2006. 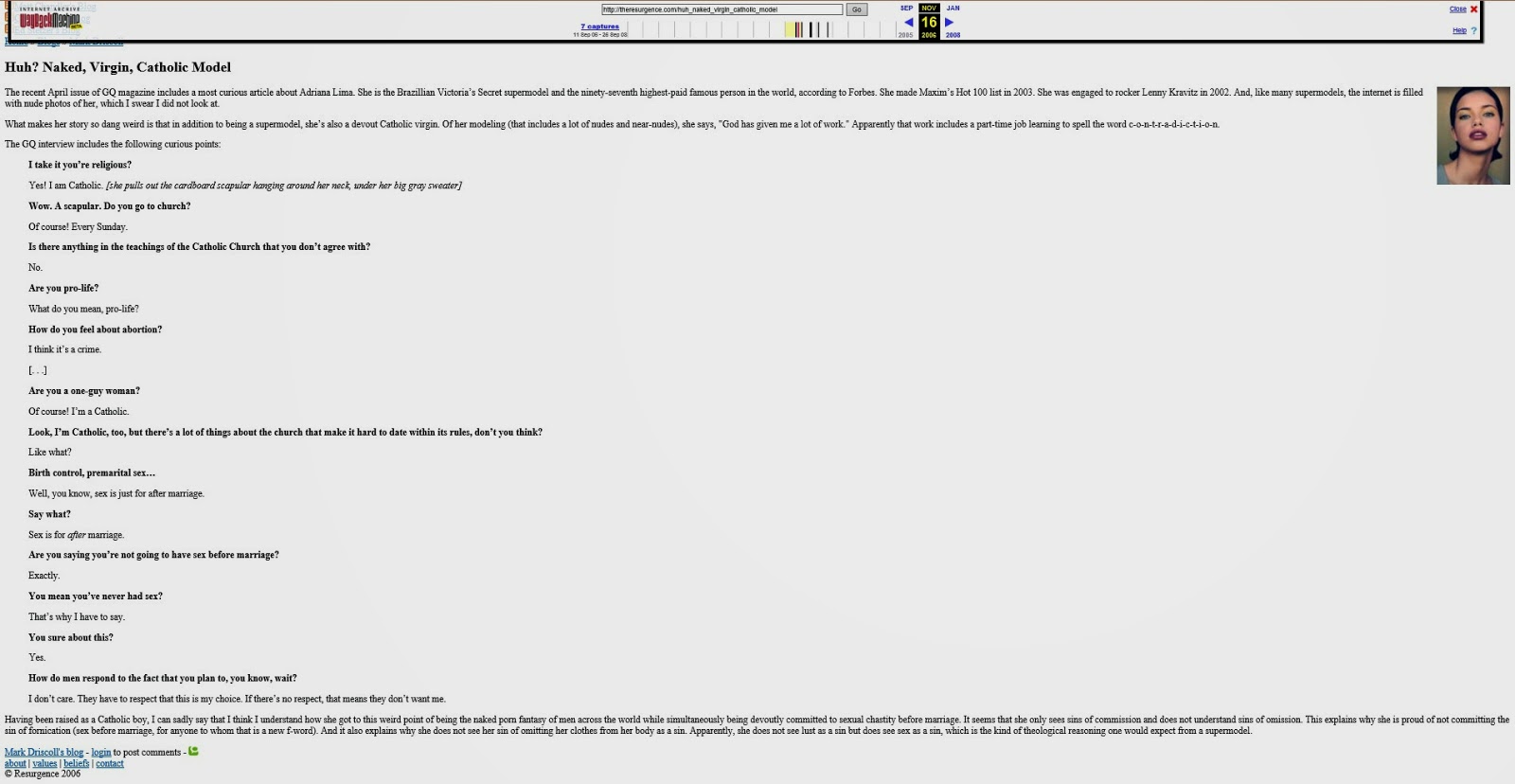 For those who can't read the text go here.

As Driscoll saw it, Lima must have had a part-time job learning to spell the word "contradiction".  Ironies abound here these last few years because if contradictions betweens professed beliefs and Christian practice on the one hand and actions on the other are a problem in Mark Driscoll's mind for Adriana Lima, are they not a problem for Mark Driscoll himself?

For instance, Mark Driscoll preached a sermon in 2014 about how we shouldn't just take it as given that a person who says "Gold told me" really heard from God on the one hand and is doing something in a godly way on the other.

The post discussing that is Mark Driscoll explained to Brian Houston how he submitted to a plan and then how God told him a trap had been set; yet last year Driscoll preached "You can't just pull out the `God told me' card."

The pertinent quote from the old Acts sermon.
http://marshill.com/en/transcript/acts-chapters-6-11-empowered-for-jesus-mission/acts-12-6-1-7
41:26ish
or keep reading until you find this here.
...
So I want to be careful with this because this can be an opportunity for spiritual abuse. Because sometimes people say, “God told me.” Well, we’ll see, OK? You can’t just pull out the “God told me” card. [emphasis added] Ladies, let’s say you meet a guy and the guy says, “God told me to marry you.” “Interesting, he didn’t tell me or my dad, you know, so I don’t have to just assume that because you say the Lord says that the Lord in fact has spoken.”

You need to be very careful. Somebody comes along, “God told me to plant a church.” Let’s check that. All right, you can’t—I mean, 1 Corinthians 14 is clear. If you think you got a word from the Lord, you’ve got to check it by the leaders. So what we’re looking for, if you believe God has told you something, especially to do something that is difficult like this, we’re looking for a godly person—Peter’s a godly person. In godly community—it says he’s with the apostles, they’re all agreed. Under godly authority—they all agree on this. With a godly motive—to talk about Jesus. Doing a godly thing—wanting to minister to people. In a godly way—by being open in public and not hiding anything. So if you believe the Lord has told you something, he may have, but I would ask, “Are you a godly person in godly community under godly authority with a godly motive doing a godly thing in a godly way?” ...

Like Mark Driscoll contacted godly counsel that apparently didn't include his actual Board of Advisors and Accountability, who were bewildered by Driscoll's not previously announced and abrupt resignation?
http://web.archive.org/web/20141016105922/https://marshill.com/2014/10/15/pastor-mark-driscolls-resignation
Pastor Mark Driscoll's Resignation
By: Mars Hill Church
Posted: Oct 15, 2014

On Tuesday, October 14, Pastor Mark Driscoll submitted his resignation as an elder and lead pastor of Mars Hill Church. The Board of Overseers has accepted that resignation [emphasis added] and is moving forward with planning for pastoral transition, recognizing the challenge of such a task in a church that has only known one pastor since its founding. We ask for prayer for the journey ahead.

As is well known, inside and outside of Mars Hill, Pastor Mark has been on a leave of absence for nearly two months while a group of elders investigated a series of formal charges brought against him. This investigation had only recently been concluded, following some 1,000 hours of research, interviewing more than 50 people and preparing 200 pages of information. This process was conducted in accordance with our church Bylaws and with Pastor Mark’s support and cooperation.
While a group of seven elders plus one member of the Board of Overseers was charged with conducting this investigation, the full Board of Overseers is charged with reaching any conclusions and issuing any findings.
...
Finally, Mark Driscoll was not asked to resign; indeed, we were surprised to receive his resignation letter. [emphasis added]

Then there's Mark Driscoll in 2009 saying, "I didn't start a side company ... for my book writing" but then starting On Mission in 2011 to manage profits of book sales.

So as contradictions go, Mark Driscoll may have concluded in 2006 that Adriana Lima's approach to modeling could be a bit too much "look but don't touch", but as c-o-n-t-r-a-d-i-c-t-i-o-n-s go, Driscoll's look more substantial.  Lima, after all, has not spent the last eighteen years saying God told her to be a supermodel. Sure, a Christian could make a case that the kind of modeling Lima has done is inimical to Christian practice but ... in the last ten years Mark Driscoll's interpretive approach to Song of Songs makes it seem as though Mark Driscoll complaining about Adriana Lima could be like the pot calling the kettle black.

And then there's drastic changes in his story. Mark Driscoll wrote in Real Marriage he wasn't a virgin when he met Grace and she wasn't either.  Then he told Christianity Today "we were both virgins".

Why would Mark Driscoll decline to mention the names of people from the Seattle region he implies or says he reconciled with because that would add drama, and yet explicitly makes a point of saying he was convicted to apologize to Joel Osteen?  The two have never met, have they?  If Driscoll's going to feel convicted to offer public apologies about how he's talked about famous people he's never met why not include Adriana Lima, too?  Grace said she never thought of anything her husband said or did as being misogynistic.  She can make that call but when Driscoll said in 2008 that:

Sometimes womens' ministry is the cesspool that this kind of activity flourishes in. Some have asked, "Why don't you have womens' ministry?" The answer is we do, but it's, you have to be very careful, it's like juggling knives.
you can go over here to read more where that came from.  It's part of content that Mark Driscoll has not been bringing back in the new website and it's not exactly easy to find.  A super-majority of Driscoll's 2008 spiritual warfare teaching session has been transcribed here.

Email ThisBlogThis!Share to TwitterShare to FacebookShare to Pinterest
Labels: Driscoll on gender and particularly women, resurgence 2006

Not a surprise. Mark had to apologize to Joel and TD and so forth because the charismatics demanded it.

To be fair, the reformed crowd probably wouldn't include Joel Iin their list of people they think Mark should repent to.

What does Driscoll get from his rapprochement with Osteen? Credibility with the Charismatics? Access into their network and followers?

Driscoll's shown, at length, he's never really been Reformed. He's pretended his and lazy journalistic coverage painted him in that light because he's held to monergistic soteriology, but that's about as far as it's really gone in the long run. Once he tipped his Amyraldian hand in 2008-2009 with "limited unlimited atonement" the Reformed figured out he wasn't on their team.

But Driscoll doesn't display the egalitarian element that you would find in a charismatic/Pentecostal idiom. If he wants to prove he's truly thinking differently about women in ministry for charismatics he should do something or say something to show that he's okay with women in ministry. He probably won't. He told Brian Houston he still holds to complementarianism and is still Reformed.

In other words, never mind how differently he says he feels now compared to 2000, what he actually thinks about gender and spiritual leadership hasn't changed at all. If he still wants to "compel young men to grow up" now in 2015 that's the same sentiment he had in 2000 when he was writing "Pussified Nation". What he told Houston this year is a variation of "I regret my tone" without recanting the substance of anything he said about what he thinks. Until he features Grace as a co-pastor with him and explicitly repudiates complementarian in all forms he might find it difficult to assimilate into the charismatic scene.

He's not showing me a whole lot of reasons to take him seriously as either Reformed on the one hand or charismatic on the other. He's shown plenty of evidence that when it's time to choose celebrity of being a pastor he's sticking to celebrity, though.