﻿
As noted earlier, Sutton Turner's Twitter following has only grown this year in spite of the fact that his signature was on the Result Source contract Mars Hill entered into to buy a #1 spot for Real Marriage on the NYT bestseller list. 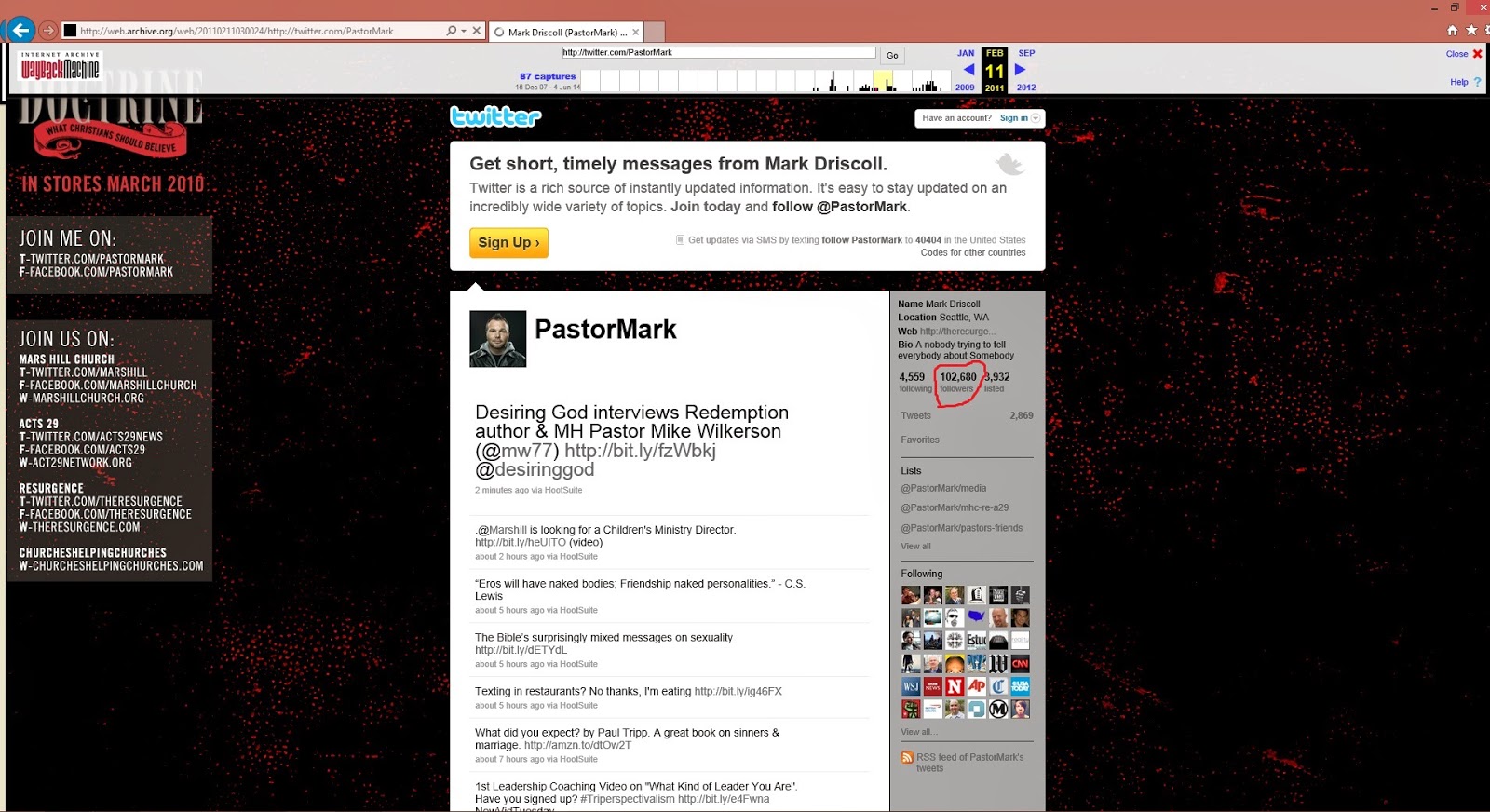 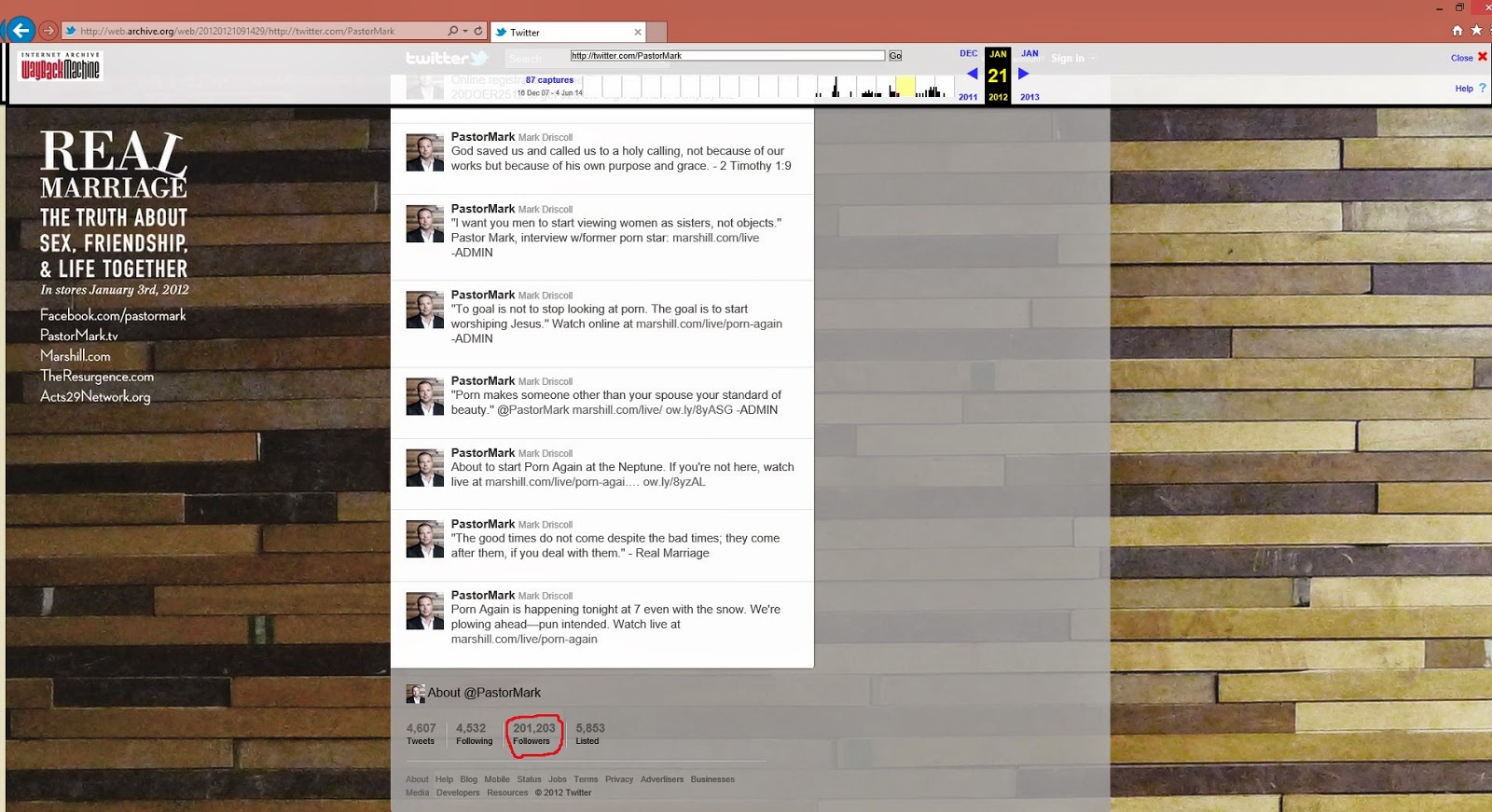 The Twitter following has continued to rise since then.  Just about a week or so before Janet Mefferd would go on to accuse Mark Driscoll of plagiarism on the air, Driscoll's Twitter following was in the zone of 433,000. 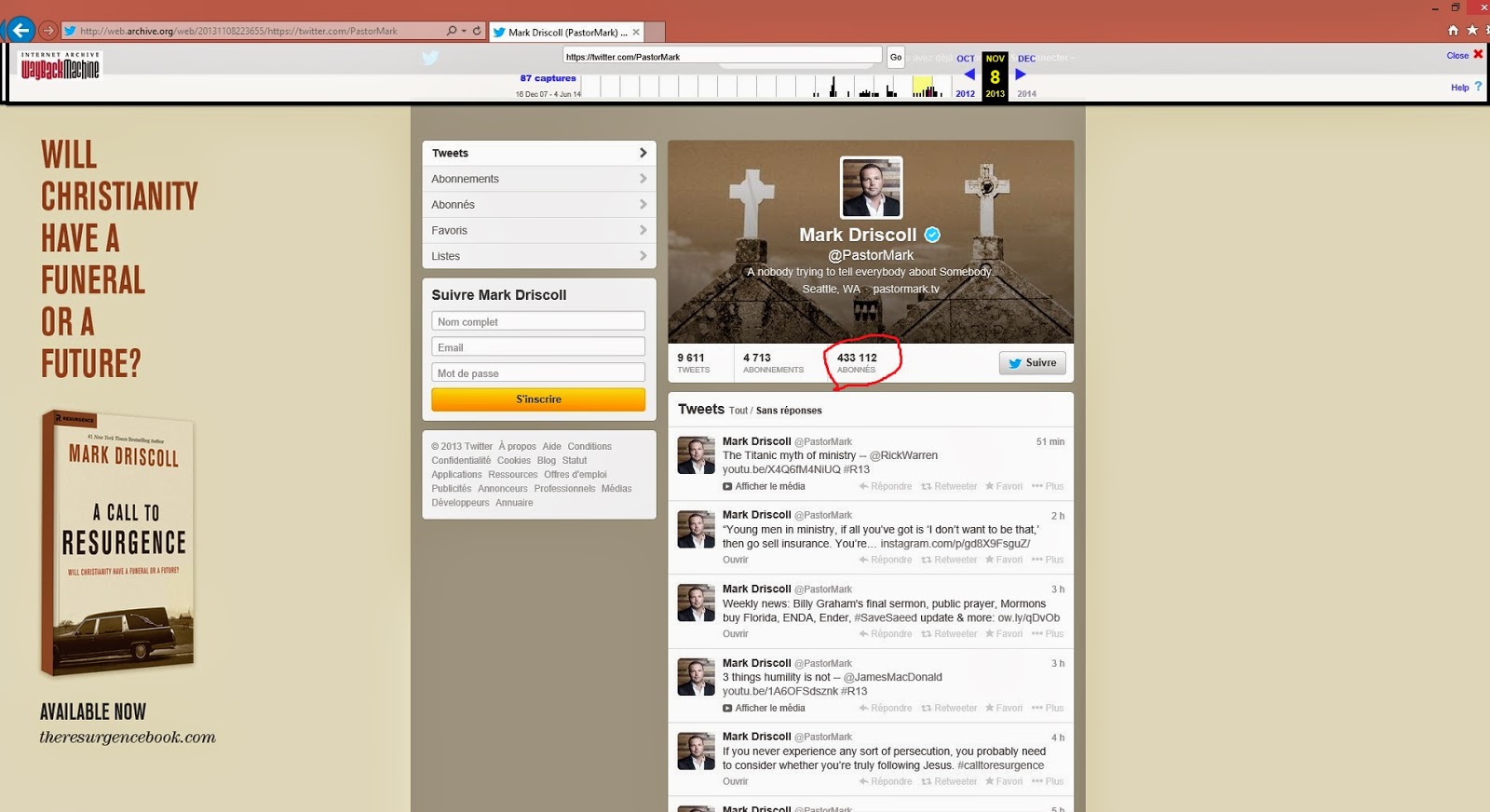 And, perhaps most curious of all, in the midst of scandal about plagiarism, Result Source, Pussified Nation, and the admission on the part of the BoAA that gag orders existed the number has kept going up.  Just about a week after the BoAA issued it's early March defense of the executive elders of Mars Hill Mark Driscoll's Twitter following had climbed up into the 465,000 region. 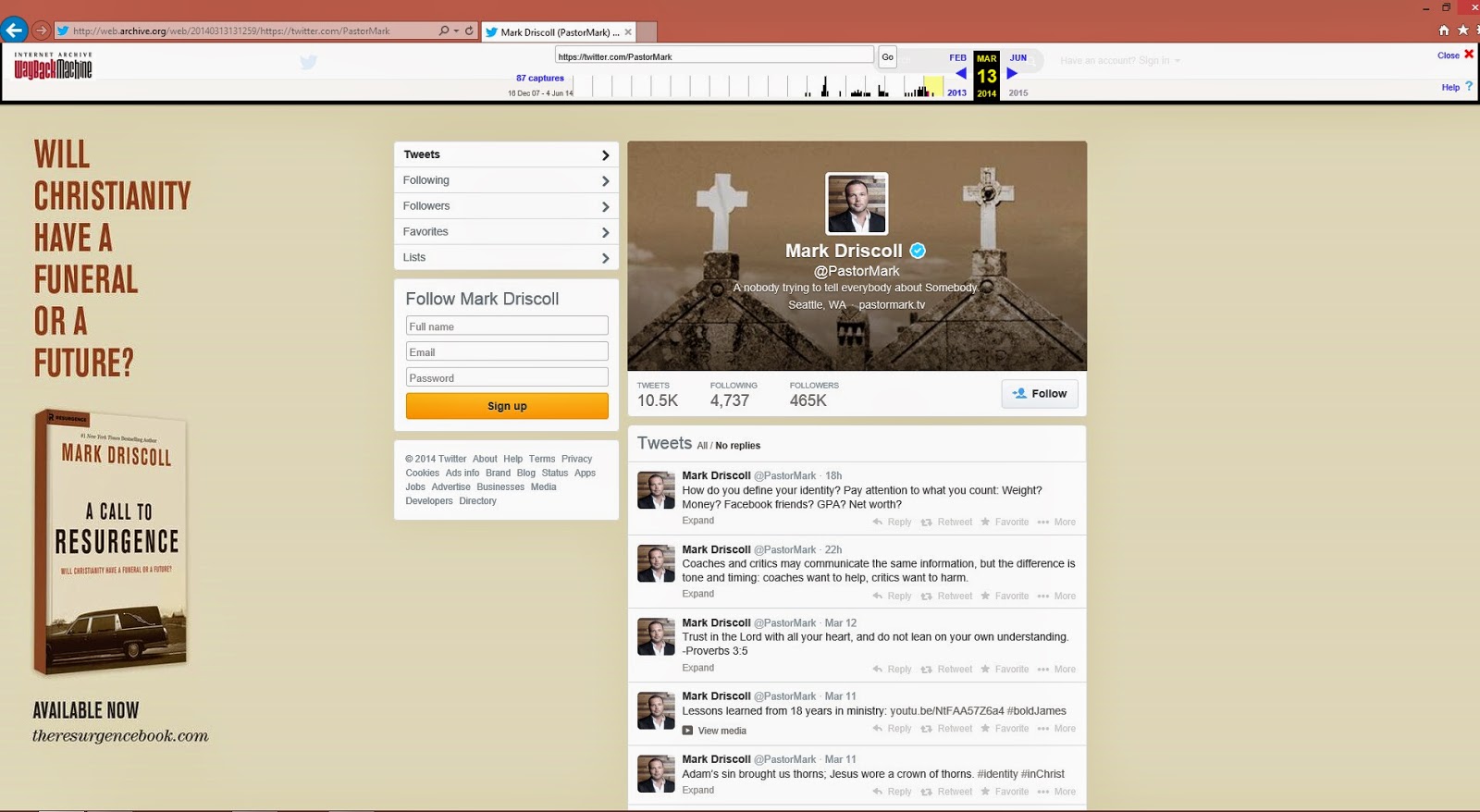 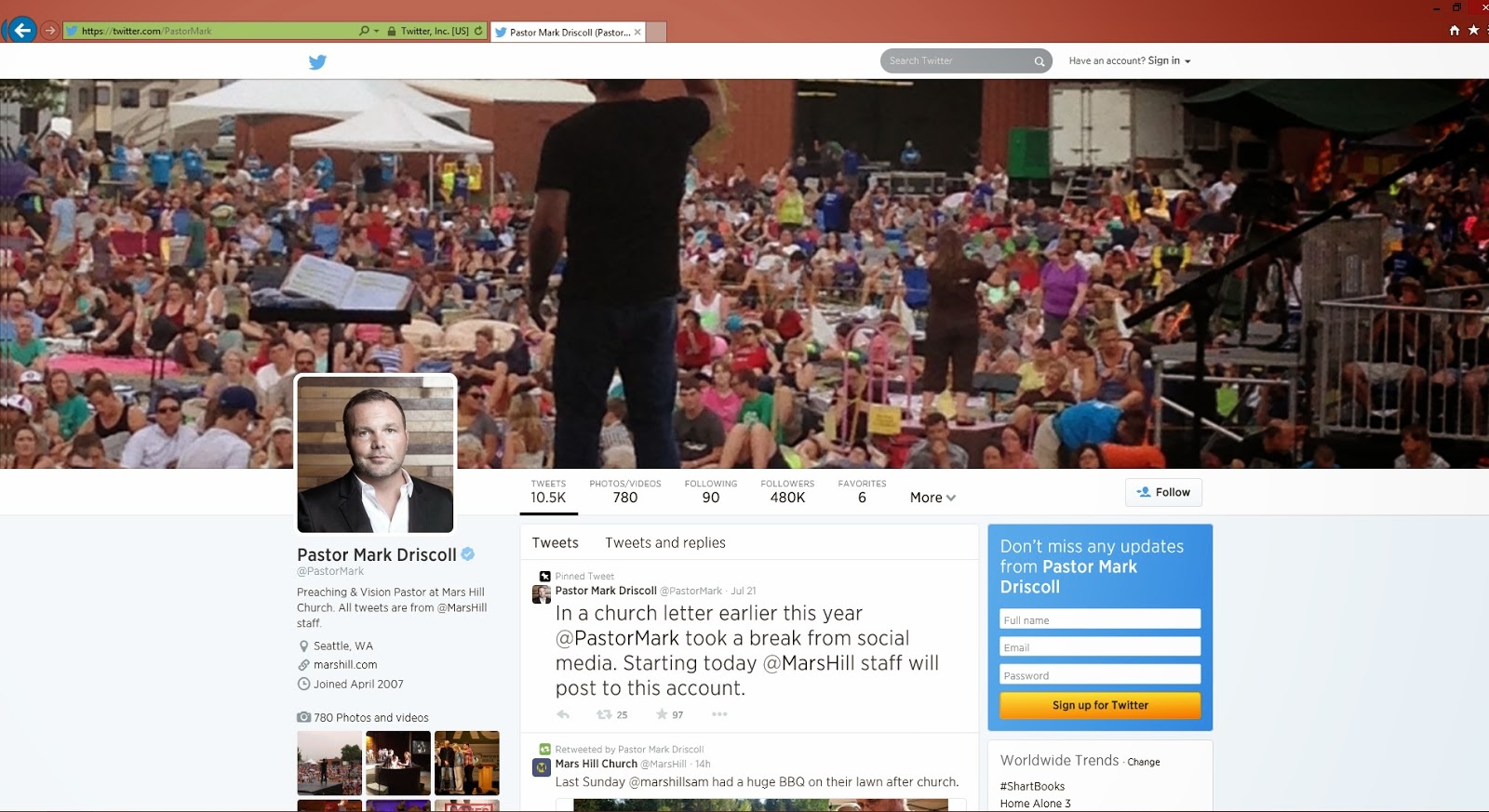 There's been nothing since 2011 that has been like the explosive growth in Driscoll's Twitter following.  And even that 100,000 from early 2011 was a big jump from even earlier dates.

We're looking at relatively modest numbers in the 2008 period. 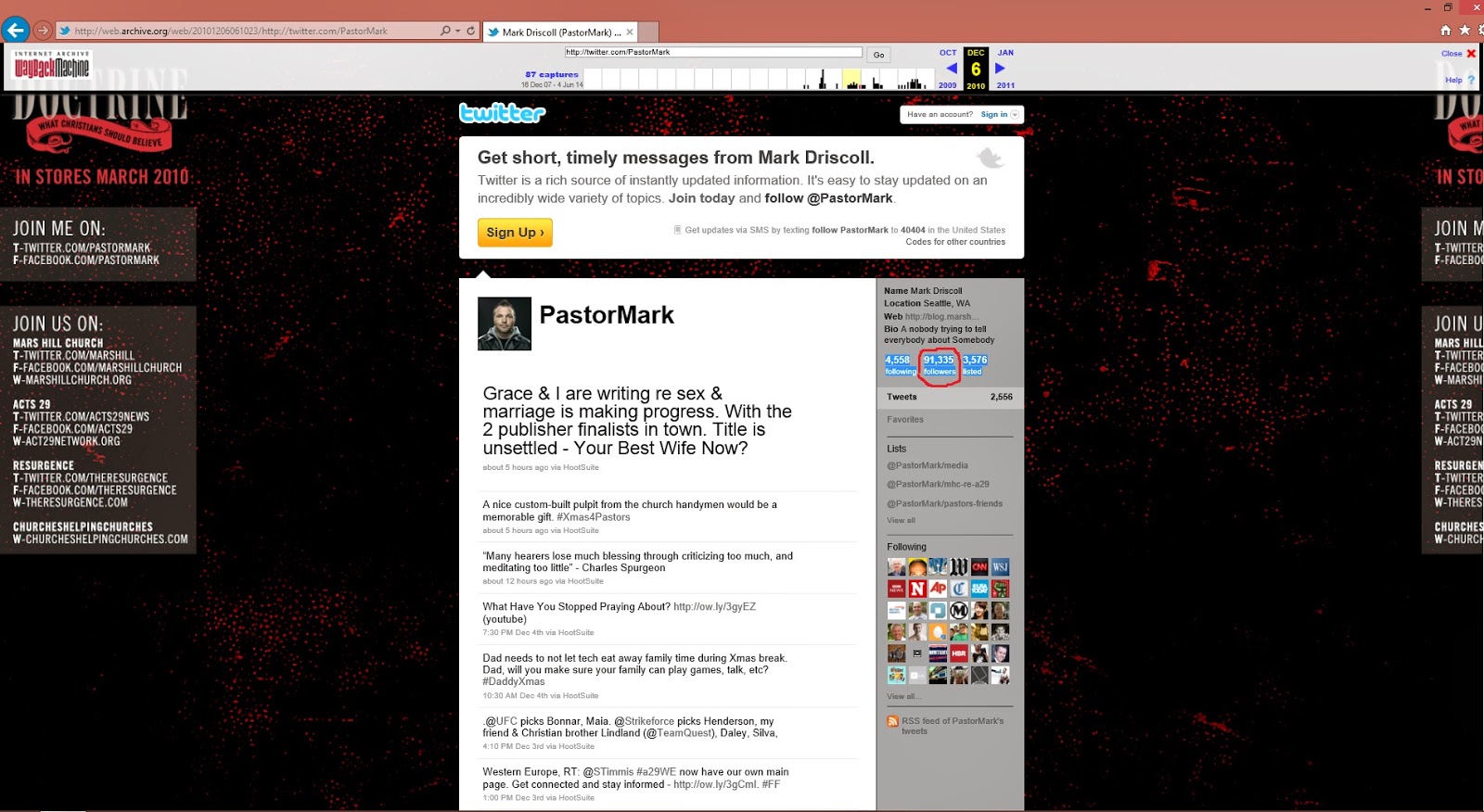 This one was worth a screen cap for the peculiar twitter joke about Mark and Grace Driscoll working on a book about sex and marriage together with a joke about the working title being Your Best Wife Now.

Then we skip ahead and The WayBack Machine has curious results for the period between September 2011 to November 2011.  It's not exactly a conventional screen capture but mileage may vary.  Anyway, Skipping ahead to December 2011. 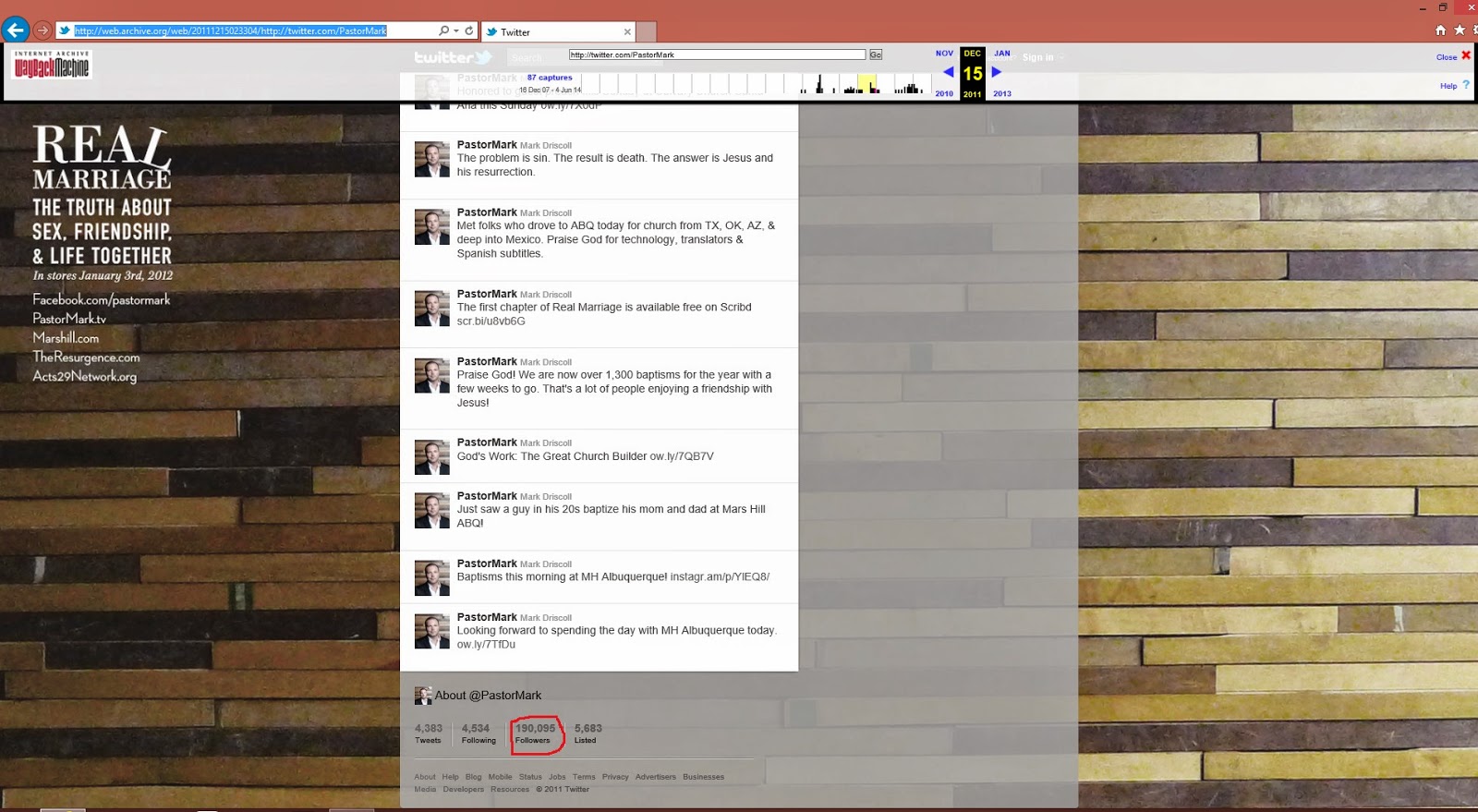 The jump from 100k to 190k seems pretty big and while one can establish correlation without any basis for causation, there might be something that correlated to the expanding media presence.  Driscoll was preparing for the roll-out of Real Marriage in a variety of media platforms and there was new blood in the Mars Hill communications department.  Dean has since come to be described as Communications and Editorial Manager. Slate described Justin Dean in early 2012 as Mars Hill's PR and marketing manager.

Founded in 1996 by Pastor Mark Driscoll, Mars Hill Church is one of the largest and fastest growing churches in the America, with 15 locations in 5 states. Headquartered in Bellevue, WA, the church also hosts teaching sites for Corban University and Western seminary, both beginning classes in the fall of 2014. Visit marshill.com to learn more.

Resurgence hosts the largest Christian leadership blog at theresurgence.com, publishes a half-dozen books annually through Resurgence Publishing, and holds conferences around the country.

So, a question that has been brewing in the last month here at Wenatchee The Hatchet is how Mark Driscoll's Twitter following has only grown amid the pile-up of controversies.  Not being particularly a user of Twitter or knowing how one gets followers on Twitter Wenatchee The Hatchet must defer to the wisdom and insights of others about this, but in a period when there are rumors that Mars Hill attendance has been dropping and when Wenatchee The Hatchet has been able to establish from annual reports that Mars Hill average attendance dropped while membership grew slightly, it's interesting to see how Mark Driscoll's Twitter following seems to have kept on growing without any apparent connection to any of the controversies he's been embroiled in or associated with in the last year.

Let's frame the question more directly, in light of Mars Hill leadership admitting to use of Result Source to game the NYT bestseller list, why wouldn't it be possible to game Twitter?  How many of the followers of Mark Driscoll on Twitter are active Twitter users?  Are there any fake accounts following Driscoll's twitter feed?  Adam's recent comment about how some follow people they disagree with is appreciated ... but that alone couldn't account for about 490k followers.  :)

Supposing someone sent Wenatchee The Hatchet some links like:

UPDATE 08-19-2014
How active and real would the following look?  Someone sent this along to Wenatchee The Hatchet. 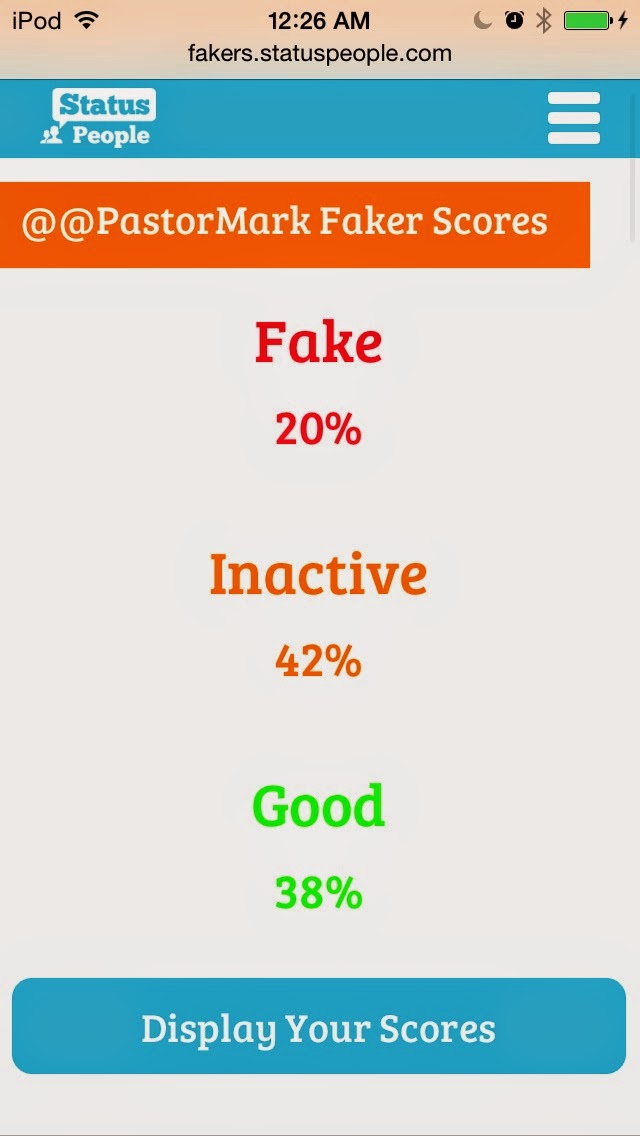 Posted by Wenatchee the Hatchet at 8:31 PM

I follow people on twitter I don't agree with. Could be folks following to see what he says, etc.

I work in Social Media marketing. While there were probably a lot of organic followers because they went on tour, I bet it's more about marketing. Since the large bump in Twitter followers coincided with the book it's most likely there was a Twitter 'campaign' to gain followers. In other words they were purchased. Depending on the way they went about it these followers could be from fake twitter accounts or from real people. It all depends on who ran their campaign and what their goal was. I'm willing to bet that Facebook 'Likes' experienced a similar bump as part of a Social Media Marketing strategy.

I remember that there were a few contests during the real marriage season that is consistent with many contests that we see today. If you like someone's facebook, follow them on twitter, etc., you get an additional entry into the contest.

It's very easy to click one little button to get another entry for something free.